No, I don't want to see India play rogue Pakistan this World Cup

We have used our power to get our way in world cricket before. It's time to do that again. Shun Pakistan. Tell them to go to hell.

India vs Pakistan is a high-profile World Cup match at Manchester on June 16. It promises to be the mother of all battles within the war to win cricket's ultimate glory. India has never lost to Pakistan in World Cup history — and this team is as strong as it gets. Pakistan, like with everything else in their country, has a lot of issues to address in its cricket team.

Excited? Can't wait for June 16? Seated in our cosy living rooms with friends, egging Virat Kohli on to score another hundred against Pakistan — that's what cricket dreams are made of for Indian fans.

When India take Pakistan on at Old Trafford in four months, my blood will boil.

I do not want to see my captain shake hands with the Pakistan skipper — that obnoxious man who thought it was funny to racially abuse a black man AND thought he could get away with a pathetic attempt at an apology.

But the Pakistan cricket captain's rotten behaviour has nothing to do with my hatred for that country.

After Uri, I wanted India to boycott Pakistan and everything Pakistani.

After Pulwama, I want Pakistan erased from the world map.

And watching my cricket team play theirs is last on my wish list.

India had cut all bilateral cricket ties with Pakistan after 26/11. For some reason, Pakistan was invited to play a few limited-overs matches in India in 2012-13 — no other cricket series has appalled me as much as that one did. Pakistan's repeated cowardice later forced India to once again suspend all bilateral ties. 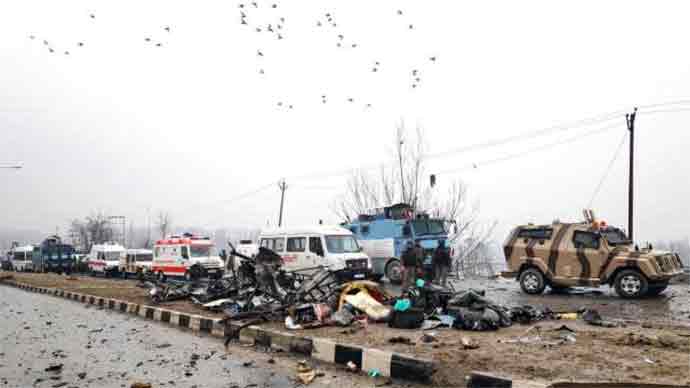 Time we hit them back: Pakistan has exported terrorism to India for decades and killed a staggering number of people. (Photo: Reuters)

Now, it's time to go a step further. Stop playing Pakistan anywhere. Even the World Cup. The BCCI should put its foot down and say — NO. WE WILL NOT PLAY PAKISTAN! EVEN IF IT'S THE WORLD CUP!

Over 40 CRPF personnel lost their lives in Pulawama after a maniac drove an SUV laden with IED and rammed his vehicle into a convoy carrying 2,500 men. Several others were injured.

Jaish-e-Mohammed has claimed responsibility for this act of cowardice. JeM, is a Pakistan-based terror outfit. How could even Pakistanis be proud of their nation? A nation in tatters. A nation in shambles. Pakistan has exported terrorism to India for decades and killed a staggering number of innocent people. And yet, the Pakistanis have the gumption to beg India to play cricket with them.

To hell with it. World opinion be damned. The Indian government has promised to take diplomatic steps and isolate Pakistan. Good!

While Pakistan is being isolated (or bombed to bits), I do NOT want to see India play cricket against them. What will the ICC do? Penalise India? Play the World Cup without India? Really?

Let them go ahead and do just that!

We will see how a World Cup turns out without India, without Virat Kohli, without MS Dhoni, without Rohit Sharma, without the Bharat Army and without millions in TRPS from our great nation. While Pakistan is being isolated (or bombed to bits), I do NOT want to see India play cricket against them. (Photo: Reuters)

Pakistan's isolation must happen at all levels. Cricket is about the only thing they have been any good at — take that away. BCCI has enough clout despite its current internal issues. Use that clout. Tell the world governing body to send a message to Pakistan: Sorry lads, India has refused to take the field against you.

Sports is meant to be a celebration of peoples, cultures and countries. It is competitive, yes but cricketers still shake hands with their opponents — no matter what happened on the field earlier. Stop acknowledging Pakistan. Stop playing cricket with them at any level.

How will the ICC take it? Well, it can start by looking at the state world cricket is in. Pakistan is hopeless anyway. Sri Lanka is struggling. West Indies are not going to mount a serious challenge for the Cup. South Africa is far from pretenders to the crown. Australia will probably play without Steve Smith and the rest of the squad do not exude much confidence.

That leaves England, India and New Zealand as the hot favourites.

India bring in the money. They are the big boys of world cricket, the rock stars.

We have used our power to get our way in world cricket before. It's time to do that again. Shun Pakistan — tell them to go to hell.

No cricket with Pakistan this World Cup. India will be grateful to BCCI.

#Jaish-e-mohammed, #World Cup, #Cricket diplomacy, #Pulwama attack
The views and opinions expressed in this article are those of the authors and do not necessarily reflect the official policy or position of DailyO.in or the India Today Group. The writers are solely responsible for any claims arising out of the contents of this article.