Virat may make a far better captain when he is trying to dismiss AB with the ball.

When AB does those things, like plucking white balls, one-handed out of thin air, the world goes nuts. And that silly smile sits on Virat’s face – there is contentment. His world is at peace. He may even have attained nirvana at that precise moment. He’s sitting in the RCB dugout but for all you know, he could be in McLeodganj with the Dalai Lama.

Often Virat is in the middle, and he can speak to his buddy after yet another of AB’s Do-Not-Try-This-At Home feats. The glow on Virat’s face is nothing short of a girl marrying her bearded Prince charming.

It’s another thing that such superhuman feats will always have a downside – they will make everyone around, including Virat, far less. There’s no way you can match AB, so why not just roll over and die? Or do nothing. He’ll take care of it. He’s a superhuman after all.

And while AB can string together some fantastic strokes and catches, he is but a foot-soldier in the team. He is not RCB’s captain, Virat is. 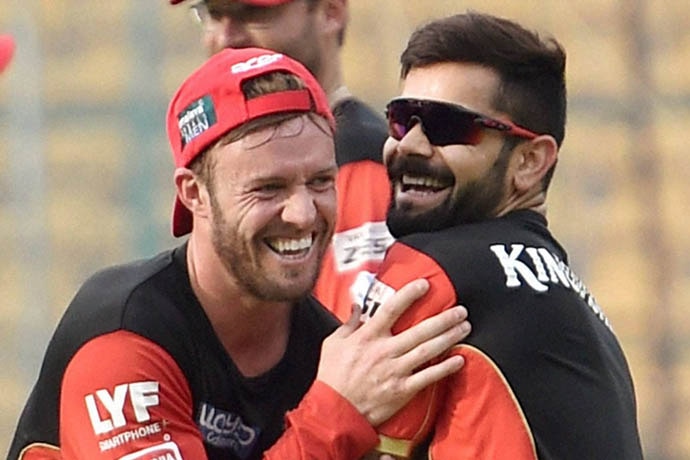 That silly smile sits on Virat’s face – there is contentment.

Virat, in his own way, can be quite a superhuman. But by now, don’t we know that in the superhero hierarchy, there is the super superhero, and his flunky? While AB was being referred to as Superman and Spiderman (the latter by Virat too), India’s cricketing superhero was enjoying way too much shade.

While both Virat and AB had an indifferent 2017 season, they both were in supreme form in 2016 where they lost to Sunrisers Hyderabad in the finals.

A final in which current SRH skipper, Kane Williamson did not feature. He played six of SRH’s 17 matches that season. The then captain, David Warner, played all matches, leading SRH to the IPL trophy.

Williamson, though, had moved in from the sidelines. This season when Warner was unavailable, Williamson led SRH to the play-offs as table toppers. 661 runs, average of 60 at a strike rate of 143. It may sound downright preposterous but for RCB to come together as a team, they may have to split the most beautiful pairing in the IPL.

Forget the numbers for a moment, and stand the four cricketers alongside each other. What do you see? Warner captain, Williamson vice-captain? AB superman, and Virat?

While Virat’s role has always been similar to that of Warner’s, to bat high up (if not open) and go on to bat through the innings with varying degrees of acceleration; it is AB’s brilliance that has been a distraction – not just for the captain but for the team on a whole.

In the shade of AB’s brilliance, RCB has underachieved yet again under Virat’s captaincy. It may sound downright preposterous but for RCB to come together as a team, they may have to split the most beautiful pairing in the IPL.

Virat may make a far better captain when he is trying to dismiss AB with the ball. The awe will be intact, (as it no doubt was in the last Test series) but there will be a far greater focus – a competition between the two, which can only happen when the two play against each other. As team mates, Virat almost seems to shudder from the limelight. And that is pretty much going against the grain.

Of course, there are other ways to do it too, go about the auctions smartly but that’s asking too much of royally challenged Bangalore.