This article has been co-authored by Piya Srinivasan and Valay Singh Rai.

It’s a great time for India if one follows the newscasts heaping effusive praise on our women athletes who have broken all previous Olympic records. Their childhoods and struggles are meticulously presented for examination; human interest stories of adversity, grit, sacrifices, dedication, abound. The larger message is that India’s "daughters" are a pride and joy, and must be celebrated.

From industrialist Anand Mahindra’s ostentatious Twitter #TharforSakshi referendum (following which he promises the Olympic bronze medallist a customized Thar) to Salman Khan posting a picture with badminton silver medallist Pusarla V Sindhu, we are witnessing an unprecedented outpouring of pride for Indian women. But amidst all this fervour, a perverse thought crosses the mind.

Q: How do you know it’s the Olympics?

A: Indian women are getting us medals and finally getting respect.

The Olympic Games originated in Olympia, Greece, where participants from several city-states within Ancient Greece congregated to prove their athletic prowess. During the games there also existed a custom called the Olympic truce, a temporary cessation of hostilities between warring city-states to enable free mobility for the participants and foster goodwill among the states.

The penalty for infringement was heavy, and compliance was seen as a moral obligation. Since then, the Olympics have become emblematic of peace, goodwill, and the overcoming of hostile relations. 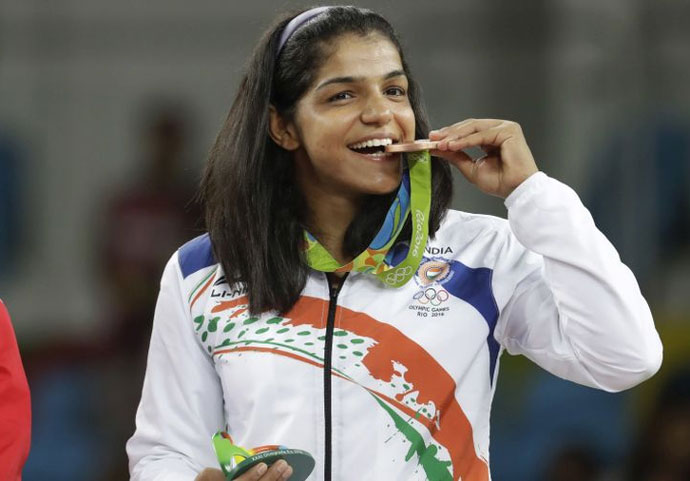 It is ironic irony that Sakshi Malik, the first Indian female wrestler and fourth Indian woman to win an Olympic medal hails from Haryana, the state with the highest rates of female foeticides.

Here in India, we seem all too familiar with the concept of a temporary cessation of hostilities. That is the status of Indian women during the Olympics.

For this ordained period, the shameful treatment of women is forgotten as the nation takes a break from its rampant and structural misogyny to claim India’s triumphant "daughters" as its own, to co-opt their labour into a sense of national pride, and whitewash their struggle against patriarchy and gender-based discrimination with a coat of Brand India. The media swoops in on the kill, penetrating the private domain of the female athletes in its efforts to own their narratives of victory.

Also read: Dipa Karmakar will be challenging death to win India a medal at Olympics

This is not news. We are no strangers to India’s quick and shameless adoption of anyone that has achieved greatness. But this only goes to expose the pervasive dichotomies that exist in our country. The bipolar nature of Indian society is laid bare through such events as the Olympics. Let us not forget that we only adulate women when they are achievers and winners; this is no reflection of their ground realities.

We only know, recognise and endorse women when they fall into certain tested tropes or categories: the daughter, the mother, the sister, the goddess, the saint. So it is no tribute to India but in fact the stuff of irony that Sakshi Malik, the first Indian female wrestler and fourth Indian woman to win an Olympic medal hails from Haryana, the state with the highest rates of female foeticides and honour killings, and the worst child sex ratio.

Sakshi’s accomplishment was quickly accommodated by Narendra Modi in his tweet, which referred to her not only as a daughter of India but also linked her victory with the auspiciousness of Raksha Bandhan. See what he did there?

On the other hand, a woman from Jaipur filed charges of abuse and rape threats on Twitter following her tweets on Dipa Karmakar. She was accused of being anti-national for criticising the government's pushing athletes to win medals without providing the necessary infrastructure, and faced death threats for lamenting that Karmakar had to perform the Produnova vault for winning a medal. She said risking one’s life to get a medal was not worth it for "any damned country". A moment of collective inspiration is ripe for the nation to pause and ask itself: If women are winning hearts and overcoming hurdles then why are attitudes toward them so primitive and regressive? Why are we so scared of women?

Is it because the sacred texts of Hindus tell us never to trust or give her too much power? Manusmriti tells us Triyacharitram, purushasyabhagyam, devo najanati, Kutomanushya, meaning "A woman's character and a man's destiny even gods can't gauge."

India accepts women in leadership roles in politics (or caricatures them into pigeonholes) only as behan (Mayawati), amma (Jayalalitha), didi (Mamata Banerjee), baji (Mehbooba Mufti), devi (Indira Gandhi), sadhvi (Pragya Thakur),the schism between saas-bahu (Smriti Irani), or the daughter or wife of a powerful man (Sonia Gandhi). As if being in politics and keeping the male members of one’s party in line must come at the cost of sacrificing one’s gender, or suppressing one’s sexuality by assigning to them some respectable, de-sexed honorific.

And it is only after a spectacular victory or a horrific rape that you become valorised as "India’s Daughter". The rest just get by, trying to find their way through a system that takes pleasure in suppressing its womenfolk.

A friend shared a Facebook status about how, when she asked a shopkeeper about the local train schedule at the train station, he accosted her saying working women were the reason men didn’t have jobs, and women were paid salaries for just sitting at home (referring to the amendment of the Maternity Benefit Act, where maternity leave was recently increased from 12 to 26 weeks).

The hostility has begun before the Bill has become a reality, even though the amendment doesn’t cover the crores of women in the unorganised sector. Perhaps this has to do with the fact that the Women's Reservation Bill, which seeks to reserve 33 per cent seats in Lok Sabha and the state Assemblies, has been pending in Parliament for 19 years now.

And despite attempts to link them, we must remember that there is no direct relation between Indian women shining in the 2016 Olympics and the beti bachao, beti padhao campaigns. Perhaps this poem expresses it best: 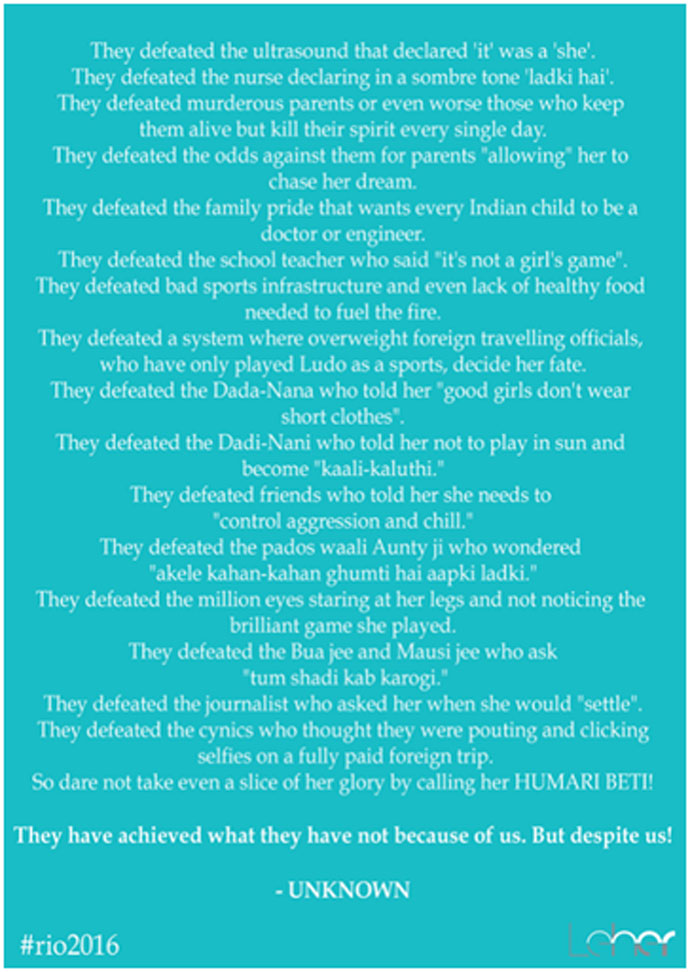 Of course the women athletes deserve to be celebrated. To overcome the social ills, the exploitation, the abuse, the discrimination, the sexism, the paternalism, the vilification is indeed a great achievement. But unlike the original pact of the Olympics in Greece, there seems to no significant moral obligation for improving women’s lot.

India, when it comes to women "beating all odds" to become victorious, funnily enough, one of the greatest odds is you.

#PV Sindhu, #Sakshi Malik, #Olympics, #Rio Olympics 2016
The views and opinions expressed in this article are those of the authors and do not necessarily reflect the official policy or position of DailyO.in or the India Today Group. The writers are solely responsible for any claims arising out of the contents of this article.