What stops India from clinching medals at Olympics

Our authorities need to select sports and games in which money can go a long way.

The Rio Olympics is over. India has come back with one silver and one bronze medal: both the medallists, PV Sindhu and Sakshi Malik, deserve our full appreciation, as do other Indian competitors who put up a good show and made it to the finals.

The competition is razor-sharp at this level, and the difference between making it to the finals and winning a medal is usually hair-thin.

Of course, there has been the usual breast-beating: a nation of India's size winning just two medals?

Denmark, where I live, with a population of five million, won 15 medals, two of them gold. There are many ways of looking at this. One can claim, as many on the Left do, that the very selection of games for the Olympics is Eurocentric.

Games that require a huge investment or are particularly popular in Western first world nations - gymnastics, swimming, etc - tend to have a lot of medals associated with them.

There is an element of truth in this, but it is also partly an excuse: there are games, like wrestling and badminton (to think of only two where Indians did reasonably well), where we can be in the running for medals.

The other point made is the difference in investment. Countries like UK, the US and Denmark invest at least 50 times more in a particular sport than we do in India.

This point is relevant, but it too has to be reformulated, for it is not enough to just notice this difference.

India, like most post-colonial nations, has a tendency to make huge "prestige" investments. One can easily imagine some major sports complex being sanctioned in the wake of our two medals from the Rio Olympics.

Such investments are insufficient. (They are even vulgar, keeping in mind India's other needs.) Why? Let me tell you a story.

The Danish gold medal that got the most attention in Denmark was won in swimming by Pernille Blume. She struck an immediate chord in a country where swimming is compulsory most schools.

This is what I mean by discouraging "prestige" investments. Just as one cannot develop a country by launching a bullet train or two, one cannot create a body of good athletes and sportspeople by building a major sports complex or two.

One needs to create an infrastructure that percolates down to the masses: not one but a thousand. Or, in India, ten thousand.

India also needs to select sports and games in which money can go a long way. Wrestling, lifting and badminton, for instance. There are many such.

If we start competing with the First World countries by building swimming pools or shooting ranges (with top-level and very expensive sports guns), we will be in a losing race right from the start. We simply cannot afford such facilities across the land yet.

Some sports require too much investment: they will perforce be confined to elite spaces (or the armed forces) in India, where they should be encouraged of course. But we need to concentrate on other sports and games nation-wide. 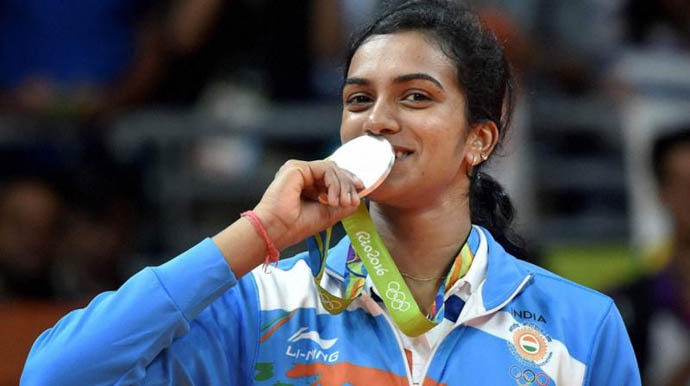 Given that most Indians tend to be smaller than most Europeans, Americans and Africans, we need to focus on the lighter weight categories even in such sports.

Here, again, it might be an advantage to focus on women, partly because Indian girls, as they tend to be less pampered by their families than Indian boys, often have more of a drive to succeed when given half a chance.

Finally, though, the relative failure of Indians in the Olympics is due to socioeconomic disparity: this is much greater in India than even in those African nations that, by concentrating on their strengths, bring in medals in a few areas.

The Indian middle class, with admirable individual exceptions, is too pampered at one level (physically) and too driven (vocationally and educationally) to do anything but study for jobs and degrees.

And the Indian working classes are often too deprived: not just in terms of opportunities and facilities, but even in terms of education and nutrition.

Until this ongoing tragedy at the heart of India is remedied, we will never be a great sporting nation.

Also read - What India must do to become an Olympic giant

Post your comment
#Sakshi Malik, #PV Sindhu, #Rio Olympics 2016
The views and opinions expressed in this article are those of the authors and do not necessarily reflect the official policy or position of DailyO.in or the India Today Group. The writers are solely responsible for any claims arising out of the contents of this article.