Mariyappan Thangavelu and Varun Singh Bhati put their heart and soul into the high jump and made us proud.

Every four years, we get to hear about a certain category of sportspersons called para athletes.

More often than not, stories revolving around para sport have to do with woes over kitting, support staff and poor treatment.

Yet, unlike some of the pampered athletes who fly out to the "main" Olympics and offer all kinds of excuses for failures, para athletes toil and deliver.

On Saturday morning, India woke up to great news that not one, but two athletes had won medals in the men's high jump. 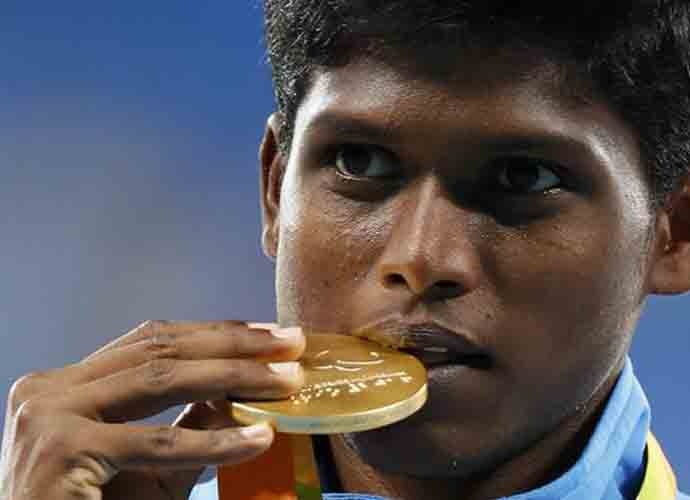 First things first, readers need to understand what T42 means. The various disabilities of the athletes are divided into categories in the Paralympics.

In the case of Mariyappan and Varun, they have disabilities which are a bit different in nature. Mariyappan was nine when a heavy vehicle ran over his right leg and he has had stunted growth after that.

He also lost his father soon after the mishap. It's his mother, who sells vegetables to make ends meet, who nurtured the dreams of her son.

And today, he is the toast of the nation as politicians and sports lovers keep viewing his 30-second effort for gold and glory.

Varun was polio-afflicted and also deserves credit for his performance. The difference between the two performers was not much.

Mariyappan had faith in his own abilities. When you talk of athletes with disabilities and how they overcome odds, the name of Oscar Pistorius comes readily to the mind.

Blade Runner, as he is popularly called, is now a disgraced man after he shot dead his girlfriend Reeva Steenkamp and is currently serving a six-year sentence.

Mariyappan never felt he had a disability. The way he competed at the district level in Salem, Tamil Nadu, was brave. He competed alongside able-bodied athletes and kept trying.

This year, before the Rio Paralympics, Mariyappan had received a Rs 20 lakh-grant from the TOPS (Target Olympic Podium Scheme) of the sports ministry. At a time when the ministry and other concerned agencies are critical of the scheme as it was not judiciously utilised by able-bodied athletes, Mariyappan toiled.

In the lead-up to the Paralympics, Mariyappan had competed in an invitation meet in Tunisia and done well. After that, it has been about training and staying focused.

Unlike other star athletes before the Games, he was not interviewed repeatedly. Yet, if you heard him speak last year, he spoke with full confidence.

"I don't see myself as an athlete different from able-bodied athletes," was his comment. How true those words have come.

On Friday night, at the historic Maracana Stadium where the likes of Usain Bolt lit up the track in August, Mariyappan was cool.

He weighs just around 43kg, which is a huge advantage. He concentrated, hopped fast on one leg (left) for about six steps.

There is a quick shuffle in the last few steps where he uses his other foot as well and then digs himself into the track and soars in the air.

Mariyappan completed the Fosbury flop action in a clear motion. The moment he landed on the cushion, the commentators were full of praise as the giant electronic scoreboard flashed 1.89m.

There was joy and ecstasy in Rio and all day long in India on Saturday. Close behind was Varun, who also hogged his share of the limelight by winning bronze.

Awards have started pouring in and Tamil Nadu chief minister J Jayalalithaa has set the ball rolling by announcing a cash award of Rs 2 crore.

The sports ministry will be giving him Rs 75 lakh. Varun will also get awards, though the amount will be lower in comparison.

At a time when PV Sindhu and Sakshi Malik are the toast of the nation and getting recognised in several cities, it is heartening to see Mariyappana and Varun make headlines.

Reactions from the sporting fraternity have been stupendous. From Virender Sehwag to other celebrities, they have heartily congratulated these two Paralympic medallists.

Mariyappan and Varun have put heart and soul into high jump and it's a tribute to their perseverance and support from their families that India feels proud today.

Inspirational stories like these will surely fire up those who have to deal with several challenges in day-to-day life.

Post your comment
#Rio Paralympics 2016, #Rio Olympics 2016
The views and opinions expressed in this article are those of the authors and do not necessarily reflect the official policy or position of DailyO.in or the India Today Group. The writers are solely responsible for any claims arising out of the contents of this article.