Why cheating sports icons hurt fans so much

But asking for Steve Smith's head on a tandoori platter is an overreaction to an act that isn’t all that terrible.

It’s the just-world fallacy. Sport, at its core, is a leveller. There’s an emphasis on fairness. Each sportsperson is on an even playing field at the start of the game, and the hardest-working/luckiest/most talented of them all comes out trumps at the end.

The little guy can beat the mean bully on any given day. Good, ultimately, will win out over evil.

Except when it doesn’t. That’s when we start scrambling.

It’s when we begin to lose faith. Hansie Cronje’s confession still rings in my ears sometimes. I was 12-ish at the time, and obsessed with cricket. Once the South African captain, a man who seemingly oozed integrity and honesty until then, admitted to match-fixing, it was all over.

I slowly began losing interest in the sport, taking my loyalties to the far superior football and tennis instead; my heart had been broken. In later years, Cronje and I made up; I sympathised with him, respected him even. But that initial shock has stayed with me. It was the end of my innocence. 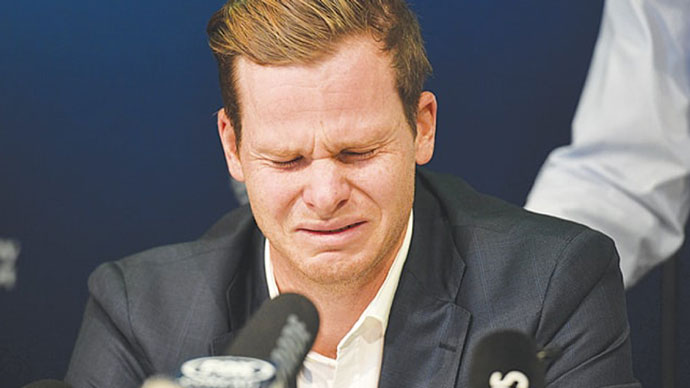 It all came back to me this week, as the ridiculously over-the-top reactions to Steve Smith’s transgressions began pouring in. Let’s be honest: asking for his head on a tandoori platter is an overreaction to an act that isn’t all that terrible. Tendulkar did it, apparently. Even Dravid did it.

But it’s not really about degrees here. It goes deeper than the fielding side gaining what is at best a miniscule advantage in a sport that’s steadily been tilting in favour of batsmen through the years. It isn’t even about the schadenfreude that a team notorious for its chest-thumping arrogance is now facing. What’s happened here is that a code has been broken.

Fundamentally, sport (like art) is just really stupid and absurd. There’s an arbitrary, made-up list of dos and don’ts that you must follow. You should ideally be born with some talent, and then you must work your brains off and master the set of skills that govern the sport of your choice.

It could be kicking a ball really fast, or smacking it with a wooden cylinder in your hand, or it could just be wiping the floor really quickly with a mop. And you must also be, like, the most perfect human being there is. You’re not allowed to have any flaws: you can’t have relationships outside of work; you can’t ask for the money you think you deserve; you must be loyal to a fault; you should be a family woman or man; you mustn’t have any vices. And we will worship the shit out of you for it.

We won’t care if convicted criminals run our country into the ground, or if people scam us of billions of rupees and flee, or if cold-blooded criminals swarm our streets with abandon. Because that’s to be expected. That’s just how the world works. But the second a sporting hero messes up - even just a little, like, say, appearing in a cocky ad campaign during a testing time for the team - we will crucify them. We place them on a pedestal, and we’re just as readily willing to throw them under the bus when it suits us.

It’s because sport is just so effortlessly aspirational for the common man. We’ve all thrown a ball around as kids, and we all like to believe that if we’d just stuck to it, or if our parents had supported us, or if our coach wasn’t such a prick, we’d be where Serena Williams is today, where Virat Kohli is, where Cristiano Ronaldo is. It’s just a matter of ifs and buts. And we like to believe that we’d be perfect humans at the same time. We’d uphold the same virtues we studied in moral science class. That their success over ours is, in a way, circumstantial.

Which is why, when someone messes up, we go a little insane. We attack them personally (sometimes to the extent of chucking stones at their family homes, or, in the tragic case of Andres Escobar, we murder them). It just evokes this mad passion in people.

And really, while most indiscretions can be still be forgiven, the one that really upsets us is the act of gaining an unfair advantage. Cheating. We’ve built up this idea of sport being fair and pure and real and uncorrupted, that any deviation from that will inevitably attract a kind of outrage that seems silly when you distance yourself from it. It’s why an entire country - England - hates one of the greatest footballers ever, Diego Maradona, for the goal he illegally punched in against them.

It’s why Lance Armstrong, a man who fought cancer (!) and won, like, every Tour de France ever, will forever have an asterisk against his name for being found guilty of doping. He was a superhuman who battled a life-threatening illness and returned a champion. But he was also a cheat.

It’s also why people were shouting for Steve Smith to be banned for life and thrown in jail and court marshalled and water-tortured. (Until he decided to shed some tears.)

Cheating upsets the delicate balance we’ve created - the mirage is briefly broken - and screws with our brain. Not just because the person cheating is gaining an unfair advantage. But also because it’s not a victimless crime. It’s a zero-sum game; for every advantage, there’s an equal opportunity lost for someone else for no fault of theirs. When, in the 2010 football World Cup, Luis Suarez handled the ball deliberately on the goal-line in the last minute of Uruguay’s quarter-final game against Ghana, it was the act of a desperate man.

And an understandable one; anyone in his position would have done the exact same thing. But Ghanaian striker Asamoah Gyan missed the subsequent penalty kick. And Ghana eventually lost the match. Did they deserve it? Hopes of a nation, of an entire continent, getting quashed, thanks to some good old-fashioned cheating.

I go back to when I was in school. At every exam, every single kid - from the nerd to the idiot miscreant - would cheat during an exam. And we didn’t care. But the second someone decided to pull some crap on the field - on the pitch, on the ground, on the court - that kid turned into a pariah. It’s just something you weren’t supposed to do. The field was a sacred space.

It’s hard to explain but, somehow, cheating - of any kind - in sport makes people question their own moral compass. We end up wondering what we would do in the same exact situation. And we may not like the answer, so we lash out. We finally start to notice the flaws in people we previously thought to be superhumans. And that’s a revelation no one wants to face.

#Ball tampering, #Cricket, #Australian cricket, #Steve Smith
The views and opinions expressed in this article are those of the authors and do not necessarily reflect the official policy or position of DailyO.in or the India Today Group. The writers are solely responsible for any claims arising out of the contents of this article.