World Cup 2019: How Team India came to be called the 'new chokers'

Mental toughness is one of the most vital cogs to sporting success. Sports, at the highest level, is often more about the art of handling pressure than the skills one possesses. Inevitably, ‘chokers’ is a dreaded word that scares sportsmen across the world. In the cricketing fraternity, 'choking' and the South African team have been virtually synonymous as the Proteas have lost a large number of tight games in crucial encounters.

After a shocking exit in the World Cup semi-finals, the Indian team is receiving a lot of flak. Countless tongues are wagging ever since New Zealand ousted the ‘men in blue’ — and one of the sharpest attacks being coined is that India is now the ‘new chokers’ of the cricketing world! The South African team was branded as chokers by the cricket fraternity but after India's loss against New Zealand, India has gained the chokers tag. (Photo: Reuters)

Given India’s splendid march to the semis, winning all but one of the matches they played in the round-robin, the disappointment of fans and the diatribes of critics were only to be expected. But the big question is: Does the ‘chokers’ tag fit Virat and his men?

Nobody, simply nobody in the world, with an understanding of cricket would have thought prior to the World Cup that India will not play the semi-finals. It was a given, especially as the format allowed the best teams to go through and India was a top team with the best ODI batsman and bowler at its disposal. But what has been painful for fans and experts alike is the manner of their capitulation. It was felt prior to the match that India could lose only in one way — Kiwi pacers taking quick wickets at the start — and on the crucial day we couldn’t prevent that. India's top-order batsmen were not able to keep up with the Kiwi's pace attack. (Photo: Reuters)

Top-order collapse showed the nerves and the weight of expectations that the players were carrying. The mental strength of their star batsmen is under the scanner now. Especially in knockout games, modern great Kohli has fallen well short of the legend, Sachin Tendulkar. Virat is seen as somebody who flourishes in pressure situations and is often compared to Sachin. But the stats present a different picture. In 14 knockout games in his career, Kohli averages just around 30 — half his career average — whereas Tendulkar’s career average of around 45 goes up to 53 in 52 knockout games.

Batting order confusion reflects an unsettled mindset in the dressing room and in the Kohli-Shastri think tank. 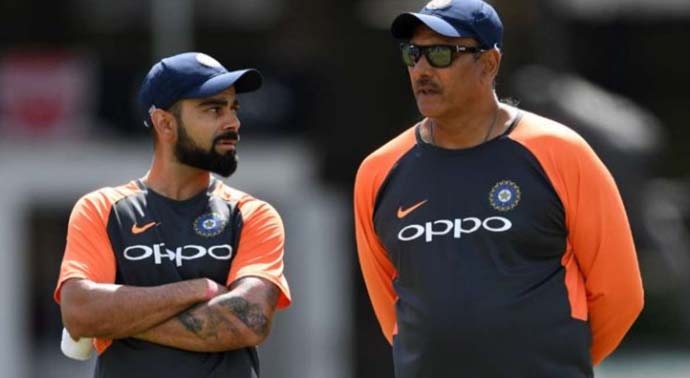 Virat Kohli and Ravi Shastri think tank backfired as they were not able to get the right combinations in place. (Photo: Reuters)

Dhoni being sent in at seven betrays an utter lack of understanding about the mental side of handling on-field stress and pressure. With nobody to guide them ball-by-ball, as Dhoni does so often with bowlers and batsmen both, young guns like Rishabh Pant and Hardik Pandya fell to reckless shots, which was their way of grappling with pressure. If Dhoni had batted higher, he could have guided young hot-heads and shepherded the chase. Instead, by the time he came in, the semi-final was all but lost.

But this is not the first time India has displayed nerves in crunch games. They did almost exactly similar hara-kiri in Champions Trophy, 2017, where Mohammad Aamir wreaked havoc skittling the star trio of Rohit Sharma, Shikhar Dhawan and Virat Kohli quickly. But the important difference two years ago was that India was chasing over 300 and was playing its arch-rivals. This time though they had a modest target of 240 to conquer and move one step closer to the Cup. India's loss of 180 runs in the ICC Champions Trophy, 2017, finals was an embarrassment for our batting side. (Photo: AP)

For the past two years, all that India had to focus on was to build a team to face such knockout games. A process was initiated after the terrible loss to Pakistan, with wrist spinners given a regular run in place of finger spinners like Ashwin and Jadeja. The middle-order needed grooming to replace a great like Yuvraj Singh. But unlike Chahal and Kuldeep, middle-order batsmen had to suffer constant chopping and changing. None of them — the list is too long to bear repetition — got an extended run to settle down in the side.

By the middle of 2018, the team looked like forming a consensus on Rayudu, and even Kohli had confidently affirmed that Rayudu is the No. 4 batsman India was searching for. But leading to the World Cup, more experiments were done, exhibiting the fickle mindset of the Indian team management. Ultimately, come the semi-finals, India looked as confused as it looked a couple of years back, with the middle-order almost in shambles. India experimented with more than six players at the number four spot, which is only proof of the fickle mindset of the management. (Photo: Reuters)

A miraculous knock by Jadeja took the team close but the thin margin of defeat doesn’t reflect how far India was on the day!

Many years ago, it was Sourav Ganguly who made India believe that it could compete at the world stage and win abroad. But there was a blip of 2007 World Cup, where India was out of the tournament just after the first round. After that, it was the Dhoni era that guided India towards cricketing supremacy. The team won all ICC tournaments and the No. 1 ranking under his leadership. The icing on the cake was the World Cup 2011, followed by the 2013 Champions Trophy. Now was the time to consolidate and remain at the top just like the Aussies of the 2000s or West Indies of the 80s.

BCCI has plenty of money and a plethora of talent at its disposal. Indian cricket team just can’t make an excuse, that it was a "bad 45 minutes of play that put them out of the championship” when the real reason lies in bad team selection and tactical blunders. It was these semi-final situations that India had to prepare for which they clearly did not. India can't make excuses that 45 minutes of bad play had put them out of the World Cup. (Photo: Reuters)

Fear, it is said, has to be acknowledged first to overcome it. At the moment, it looks as if Virat and his boys have a certain apprehension of losing as they are touted as champions even before any tournament begins. A billion wishes and the media hype only add to the weight on their shoulders and they seem to become extra-cautious and lose their rhythm in crunch games.

While currently, it seems a tad unfair and hasty to call the ‘men in blue’ as chokers, India will need to win an ICC tournament at the earliest to ensure that this tag does not stick to them. Or else, the dubious distinction that has for decades been monopolised by the Proteas may soon get transferred to Virat’s warriors!