Was it becoming of India's vice-captain?

An Indian cricketer is chatting with two Murdoch University employees when a journalist starts to abuse him. How do you think the cricketer would have reacted? Yeah, poor journo alright.

An Indian journalist is chatting with two Murdoch University employees when a cricketer starts to abuse him. The journalist does not react. Later, the cricketer's apology is sent via another journalist citing mistaken identity.

The journalist is Jasvinder Sidhu. Did Virat Kohli think it was Navjot? Kohli can claim it was Mitchell Johnson, still not on - this was not a sledge on the cricket field aimed at a cricketer or a random spectator in the crowd, this was an unprovoked abuse at a journalist. Kohli is not on vacation, he is representing India (though some will claim he represents BCCI, Nike, Star Sports) - in that case, is it on? For that, we must delve deep into the dressing room - BCCI jokes' culture - and their understanding of the BCCI culture that anything goes. But if Kohli is under the impression that he is representing India, it does warrant a rethink, young man. 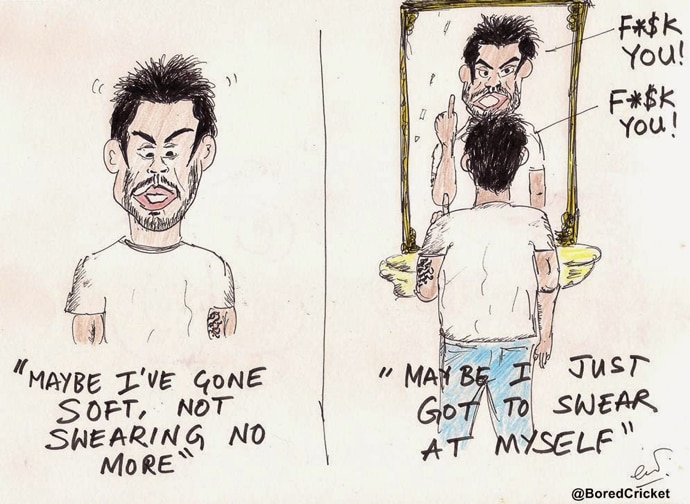 Glad to report, Kohli did break into English abuse - "Huffing and puffing, Kohli said, "Yes, you ba****d. You are here also". C'mon, why the ****s here, bastard is acceptable, no? But this last part, very dicey, especially if aimed at an Aussie cricketer who could misconstrue it as a racial slur - "Before I could gather myself, he walked towards the dressing room with his kit in hand, murmuring continuously, "m** ki c***." Not for a moment did I think disallowing WAGs and aiyas was a good idea. They're necessary to iron out wrinkled... and crumpled trousers.

Appears it's crucial to address the vice captaincy here - Kohli is still not the ODI skip, and this abuse was not in his capacity as Test captain. Is it becoming of a vice captain? What standards, if any do vice captains have? Or will Kohli just grow into the job and start mouthing platitudes instead of be***hoditudes?

For starters, Kohli should have, and still can, personally apologise to Sidhu. And while doing so, avoid any Hindi abuse and that one English word in particular, bastard, even in jest. You are not mates. This could be the beginning of a beautiful friendship but there is much work to be done.

After apologising in person, allow Sidhu to abuse you. Encourage him to wag and point his fingers as you did to him. Also, don't force him to use the same filthy language, if idiot, fool, bad boy, loser, big lips, obnoxious, depraved, national disgrace, filthy tongue, are more his scene, so be it. Hear him out, as he did, you.

Grant him an interview in private. Sure, get Shastri's ok on this, don't be surprised, Shastri could be the first to suggest this. Apologise to him in the interview. Tell him you thought it was Navjot, it works for most people who abuse someone called Sidhu.

Do a shinny, happy people photo-shoot with him and those two Murdoch University employees. Who knows, maybe even a story, how the two were basking in the mistaken glory of being abused by Virat Kohli.You love press conferences, do another one. Speak from the heart as you often do, it's not half as much fun as the abuse, and you'll leave the journalists asking for less.

#BCCI, #Virat Kohli, #Cricket, #World Cup 2015
The views and opinions expressed in this article are those of the authors and do not necessarily reflect the official policy or position of DailyO.in or the India Today Group. The writers are solely responsible for any claims arising out of the contents of this article.