When Virat Kohli pulled off a Sachin Tendulkar

While the Master Blaster was generally liked, the current skipper’s asset is his unlikeability.

Virat Kohli is unlike Sachin Tendulkar in far too many ways. It takes a special player to be so universally disliked. If you’re English or Australian, loathing the very ground that Kohli scores on comes easy. Kohli isn’t meant to be likeable. Not at least for adversary teams. By now, he’s comfortable being in that creepy, unlikeable skin of his. That itself sorts out a lot of issues — at least for him. 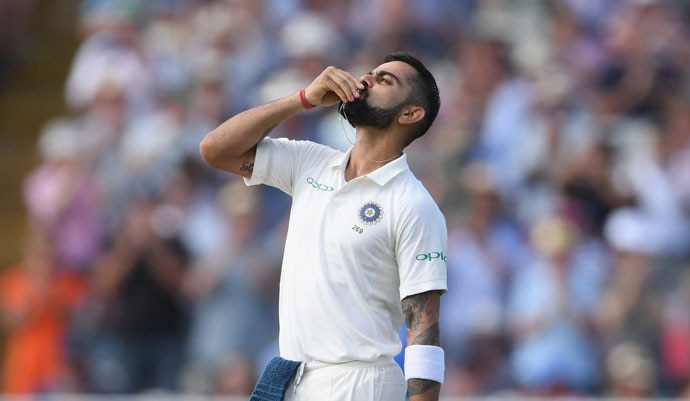 Kohli celebrated his century as only he does — roaring, kissing his locket, smiling, salaam-ing. (Photo: ICC/Twitter)

Every now and then, he sheds some of this creepy skin, and becomes a poised, likeable guy behind the mic. Then the mic drops. And the penny. And he’s out to get his pound of flesh.

To needle is Kohli’s currency. More so, when he senses he’s in the eye of the storm. Kohli will, like a Banarsi weaver, take that needle and shove it right through the storm. Often enough, the storm is of his making. Either way, he’s always a ready accomplice.

Kohli’s two lives courtesy Dawid Malan in the slips were a long time ago. Kohli likes his fast bowlers. That he trusts them deeply with the bat was a revelation. More so after Shami was done just 13 runs after Ashwin.

The last two wickets added a country mile to India’s final score. Never mind that Ishant Sharma and Umesh Yadav made only 6 of the last 92.

What began shakily for Kohli against James Anderson, with edges and nicks not going to hand, built into a thoughtful, yet dull, sameness of leaving-the-ball.  Anderson continued to bowl unchanged, mostly outside off, Kohli continued to leave unhinged. Scoring was sacrificed, but a battle — crucially, both an inner one and one against Anderson — was won. Anderson was England’s most economical bowler, but his main mission to prise out Kohli went unfulfilled. 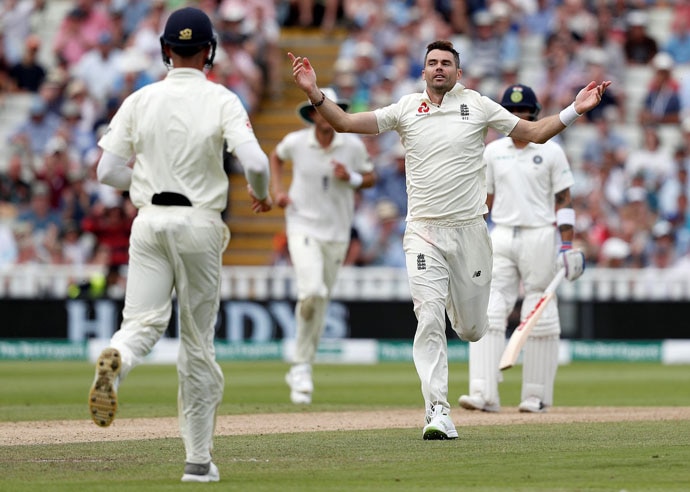 Anderson was England’s most economical bowler, but his main mission to prise out Kohli went unfulfilled. (Photo: ICC/Twitter)

It was hardly dramatic. Leaving the ball rarely is unless you’re Courtney Walsh. Through this mostly barren, long stretch against Anderson, Kohli sowed the seeds of his first century on English soil. And who’s to say how many more will inevitably follow. Growing hundreds, like flowers, takes patience, more so in tricky English conditions. Kohli, as do flowers, made the most of the sun that peaked through the clouds.

And then, six balls after Ishant’s wicket, after four dots, Kohli glanced one behind square to the IPA sign boundary. In a perfect world, beer would’ve served to all, with Shastri picking the tab. Instead, Kohli roared, as only Kohli roars — helmet off, right glove off, locket kissed, salaams, smiles. There was a lightness to it all.

Atherton called him a remarkable player on air. Kohli was by now batting on air. Introspective one-day mode had been activated. Which, in Kohli’s case, implied attacking shots strewn between deadpan defence and the occasional single.

In 12 overs, for the 10th wicket, India added 63 runs after Kohli’s century — eight fours and a six off the skipper’s bat, and four byes past Yadav off nobody’s bat.

It was his 22nd Test century. What this means to him, we may never know. If we do, it most probably will come at the end of a successful tour. One that he may have to hold together largely with his bat.

In the second dig, Kohli was in at 22/2. The top order hurried away, Ashwin walking in at 63/4. 110/5 overnight, with 84 for a win. Within two runs on the fourth morning, Dinesh Karthik was gone. Kohli went pass his fifty but when Stokes got one to go past his bat, he was trapped in front; a review only delayed it. Within a minute, Kohli was dismissed twice — first by the umpire, then by the review.

If anyone thought otherwise, Kohli’s dismissal had been communicated clearly — India’s chase was dismissed too. From 31 runs shy of the target, India folded within the next 21 runs.

A day after India’s defeat, somewhat ironically, it was announced that Virat Kohli is the world’s No. 1 Test player. An Indian on top after 2011, after Sachin Tendulkar. No cricketer has received a send-off anywhere close to that of Tendulkar. (Photo: Reuters/file)

That Tendulkar had many such days — like Kohli, doing all the dirty work — isn’t lost on anyone. The comparisons are out there. That Tendulkar had with him the likes of Sehwag, Dravid, Laxman and Ganguly isn’t lost on anyone either. But such was his reputation that few grew in his shade. Each might have played masterful innings, some far scaling those played by Tendulkar, but no cricketer received a farewell anywhere close to that of Tendulkar. He was, to put it bluntly, the first amongst equals. Not by numbers alone, but by his aura, his reputation, his likeability.

Kohli outscores Tendulkar — not with his likeability but how he can be vastly disliked. Kohli’s aura, reputation and numbers, though, are surging like some tropical storm. There is more than a hint of fear and awe that accompanies Kohli to the crease.

It’s up to the present lot whether they want to wither in Kohli’s shadow or grow out of it. Few will, but on the odd day that they can, they will only add to Kohli’s reputation — more as a captain. Something that Tendulkar often lacked.

If Kohli’s 200 runs in the Test can inspire both him and his batsmen to greater deeds, we will be treated to a memorable English August. Come September, and we will know who will drop the mic one last time this summer. And you can be sure, Tendulkar will be watching.