Remembering the revolt of 1857: When Hindus and Muslims were comrades in arms

Whenever the Bharatiya Janata Party-led National Democratic Alliance (NDA) comes to power, the media gets flooded with communal historiography — the main thesis of which is that Hindus and Muslims have comprised antagonistic cultural communities locked in combat since the early days of the Delhi Sultanate. The renaming of roads after medieval “Hindu” heroes is a corollary of this phenomenon. So is the search for good Muslims in Indian history. Since military conflict is made to play a special role in the communal writing of history officially promoted by the Sangh Parivar, we must examine military history seriously to counter and refute this claim.

Ironically, military history provides us the best example of Hindu-Muslim political cooperation and coexistence in India’s past.

May is a good month to re-examine the Hindu-Muslim element in Indian military history because one of the greatest demonstrations of military cooperation between the two communities was witnessed during the Revolt of 1857 which began in May 1857. This short intervention seeks to underline some facts of Indian history which disprove the main submission of communal history writing much in vogue today. Indian history and its communitarian memory changed dramatically with the rise of various nationalisms in India during the Raj post 1857. Photo: YouTube/screengrab

To begin with, we must note that the medieval Indian polities, ruled by Muslim and Hindu elite both, developed the tradition of employing Muslim mercenaries, especially cavalry, from outside India rather early. Mounted archers and later matchlock men using tufangs and bandooks were in great demand in India before the 18th century. It is well documented that Turks, Arabs, Persians, Pathans and Central Asian Muslims groups like the Uzbegs and Tajiks were employed in large numbers by Sultans and Badshahs of Hindustan from the 13th to 18th century CE.

The Mughals were particularly impressed by the Ottomans and their military technology was based on and often managed by the Rumis — that is the Turks from the Ottoman regions. What is less-known is the fact that Muslims also served as infantrymen, expert archers, cavalry troopers and sea captains in the heterogeneous armies of the so-called Hindu polities.

A contingent of Muslim archers served in the Vijayanagara Army in the 16th century. In the same century, Muslim commanders served Rana Pratap at Haldighati with distinction dispelling the myth that this battle was communal in character. The founder of the Maratha swarajya, Shivaji, employed several Muslims as commanders in his new navy and fast moving military columns in the 17th century, while his opponents the Mughals employed Rajput generals and troops in large numbers. After slaying the Bijapur general Afzal Khan, Shivaji got his mausoleum built as a clear indication that his conflict with the Deccan Sultanates was not about religion.

In the Deccan, the tradition of Muslims employing Hindu commanders and vice versa continued in the 18th century. The Peshwas maintained contingents of Muslims as part of their personal troops. The private troops of the Peshwas were a counterpoise against the various clan-controlled armies raised and maintained by the Maratha Sardars.

Many of these mercenary troops, following the military practices established by the Deccan Sultanates and later the Nizam of Hyderabad, were migrant Pathans who eventually settled down in the Deccan blending with the local cultures. Thus, the military labour market of India was far flung and diverse before being dominated by the Gangaplain during the rule of the East India Company.

The Portuguese also employed Malabari Muslims and half castes like the Topasses in their India-based fleets which conquered large parts of south east Asia.

No one can forget Ibrahim Khan “Gardi” (actually a Durrani like Ahmad Shah Abdali) and his French-trained artillery and infantry who gave a fine account of themselves against the Indo-Afghan alliance at Panipat in 1761. Ibrahim Khan and Sadashiv Rao “Bhau”, the de facto commander of the Maratha armies in 1760-61, were bound by a great friendship. The tradition of employing contingents of Muslim cavalry was continued by the Indian native states during the 19th century. 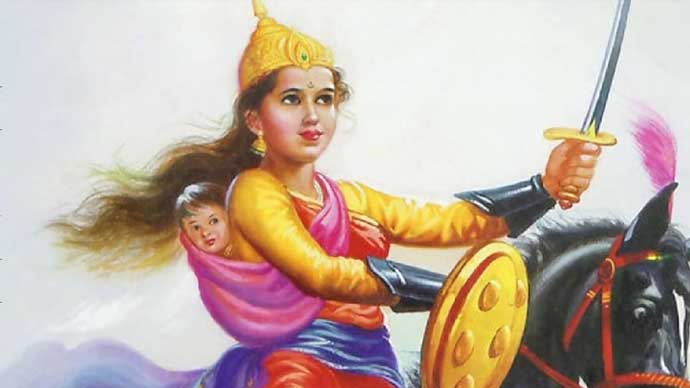 When Rani Laxmibai escaped from Jhansi and headed towards Kalpi to join forces with Nana Saheb and Tatya Tope in March 1858, her mixed escort comprised a number of Muslim bodyguards. Photo: YouTube/screengrab

Maharaja Ranjit Singh, the Lion of Punjab, was not averse to providing military opportunities to a large number of Muslims despite the memory of Guru Gobind Singh having rebelled against the Mughal. Rani Laxmibai of Jhansi, a Brahmin queen on the wrong side of the British in 1857 because of Lord Dalhousie’s policy of the Doctrine of Lapse, employed a disciplined contingent of 1500 Arab cavalry who fought hard against the British outside Jhansi under her command.

According to the eyewitness account of the 1857 Revolt in Jhansi left behind by Vishnubhattji Godse called Majha Pravas (My Travel), the Arabs lost 400 men in the battle with the advancing British but stood firm by the side of their employer in the Fort. When the queen escaped from Jhansi and headed towards Kalpi to join forces with Nana Saheb and Tatya Tope in March-end 1858, her mixed escort comprised a number of Muslim bodyguards.

This Hindu-Muslim unity against the British, which in the case of Brahmin-ruled states like Jhansi involved even the Arab mercenaries, was underlined by Sir Syed Ahmad Khan in the first analytical study of the 1857 Baghaavat, The Causes of the Indian Revolt (Asbab e Baghaavat e Hind) in 1858, published not long after the Rani of Jhansi was killed in action.

Students of Indian history nourished by communal drivel these days must remember these facts on the eve of another anniversary of the 1857 Ghadar. They must also remember that Indian history and its communitarian memory changed dramatically with the rise of various nationalisms in India during the Raj post 1857.

The history buffs of our times and the weekend historians of the Sangh variety must pay attention to the facts mentioned above before approaching the media with their ahistorical communal assertions. Communal politics and Indian history are incompatible. The factual history of our civilisation does not support the “clash of civilisations” thesis.

Also read: How they built Vijayanagara — the divine capital of Hindu sultans