The Sveriges Riksbank prize in Economic Sciences 2019 in memory of Alfred Nobel was jointly awarded to Abhijit Banerjee, Esther Duflo and Michael Kremer. Esther Duflo is now the youngest economist ever to get a Nobel Prize for Economics and only the second woman to receive it. 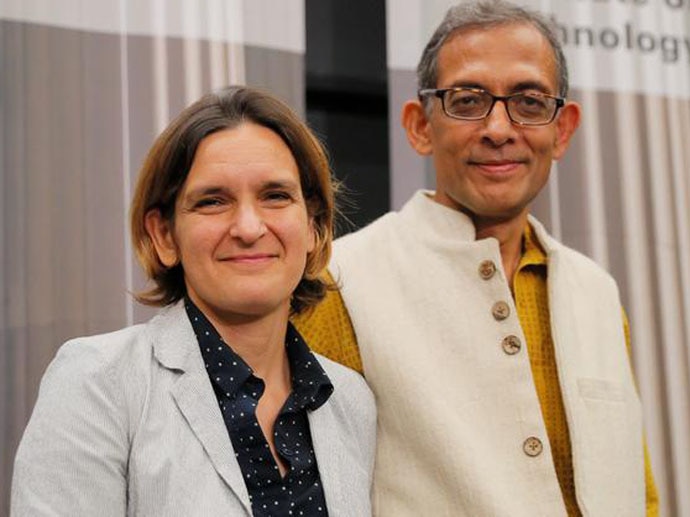 Abhijit Banerjee and Esther Duflo have been declared winners of the Nobel Prize in Economic Sciences. (Photo: Reuters)

This announcement merits high praise and is significant on several counts.

First, the laureates, despite their relatively young age (from the perspective of receiving a Nobel) have been instrumental in the push for evidence-based policy diagnosis in the field of development economics, which was seen as one of the peripheral fields of marginal thinking. In its current form, the discipline owes a lot to the contributions made by these three economists.

Their collective works have also bridged a wide gap between 'theory' and 'praxis', the bane of traditional neoclassical economics. Kremer initiated some of these aspects with his experiments on field-design during his work on de-worming in Kenyan schools. Duflo and Banerjee expanded this micro-experimental design to many more countries.

Over time, through their interventions, developing nations (like India) could change policy designs on improving delivery outcomes for healthcare, education, etc.

Their methodological innovation of using Randomised Controlled Trials (which have also received a fair share of criticism in recent years), offered a useful field-based design for scholars and policy evaluators to conduct trials of assessment with concerned subject groups.

Banerjee, Duflo and Kremer have been instrumental in showing how 'practical insights' shape 'economic theory'. Michael Kremer along with Banerjee and Duflo have been instrumental in showing how 'practical insights' shape 'economic theory'(Photo: Twitter)

In 2003, Banerjee and Duflo helped set up J-PAL, the Abdul Latif Jameel Poverty Action Lab, at Massachusetts Institute of Technology. Soon, J-PAL became a global network of development researchers united by the mission to improve the 'quality' of policies that affect 'poor people' worldwide and by ensuring that policy decisions are based on 'scientific evidence'.

The application of RCT can be explained here with an illustration. For example, if the government of a given state has come out with a new advanced technological tool to enable better learning outcomes for school students belonging to a specific class-grade (say, between grade six and eight), RCT would involve sampling a quantum from the total number of schools where the scheme needs to be actually implemented.

So, through a random sampling, any 100 schools out of 400 (total to be targeted) will have the advanced technological tool allowed for implementation, while others will continue to use the status quo methods, and this would be done to see whether the new pedagogical experiment makes any difference in student learning outcomes (which was the goal of the government policy). This micro, field-based approach brought an experimental turn in economic analysis.

Today, J-PAL remains engaged in conducting about 850 to 880 distinct RCTs in close to 80 countries, whose research spans across the subject areas of healthcare, microfinance, labour market governance, environment and designs of social support programmes.

India has been the largest office for J-PAL and the institution's first set of partners included organisations such as Seva Mandir and Pratham (from civil society). It is an ironically sad state of affairs to witness a gradual degradation in India's own national income accounting and other statistical infrastructure, considering how India became an incubation centre for pursuing major development experiments for J-PAL and in conducting RCTs to improve governance.

Another critical aspect of the laureates' work has been gauging incentive compatibility within existing (or new) policies. This entails using RCTs here to know what kind of incentives work and under what conditions. A context-dependent scenario for designing an appropriate set of incentives is key to policy effectiveness. Banerjee and Duflo's work allowed a parallel network of researchers to pursue context-dependent trials to test the effectiveness of social policy outcomes.

For the nature of chronic developmental challenges faced by countries (like India) today, a closer review and assessment of each of the laureates' scholarship, and their contributions in areas of social and economic policy within developing nations, is a must. More importantly, the sum of their contributions reflects how often an armchair, exclusivist approach to social science research and academic scholarship is counter-productive to designing and implementing policies.

Constant collaborative engagement with different stakeholders provides a mutually reinforcing feedback loop of sorts to conduct, design and develop research methods for those considered, and this is something that each of the laureates have always laid emphasis on in their conversations and work. Similarly, a process of constant experimentation institutionalised in the form of J-PAL would not have been possible without a collaborative, experimental spirit of fieldwork.