Ever wondered what happened to the little green-eyed Afghan girl on the cover of National Geographic, whose sharp gaze tore through the conscience of millions in the world? This is her story after the Taliban takeover of Afghanistan.

Unknowingly, a 12-year-old girl shook the conscience of millions around the world and forced them to turn an eye towards one of the biggest humanitarian crises unfolding during the time. It was Sharbat Gula, an Afghan refugee at a camp in Pakistan. Sharbat Gula and her piercing green-eyed gaze tore through the cover of National Geographic in 1985. At the time, Afghanistan was at war.

The Soviet Union had invaded the country and the Mujahideen were hard at battle with them. Amid the chaos were innocent people and children like Sharbat Gula, who were rendered homeless, and stateless overnight.

After nearly 4 decades of war, Sharbat Gula still represents the anguish of the displaced population of Afghanistan. Recently, US decided to end its 20-year war in Afghanistan. And the Taliban took over the country.

SO, WHERE IS SHARBAT GULA NOW? Fortunately, Sharbat Gula and her family are alive and well. She is 49 now. However, she’s become a refugee all over again. After the Taliban takeover of Afghanistan, Sharbat Gula was evacuated by Italian officials. She has now sought refuge in Rome. 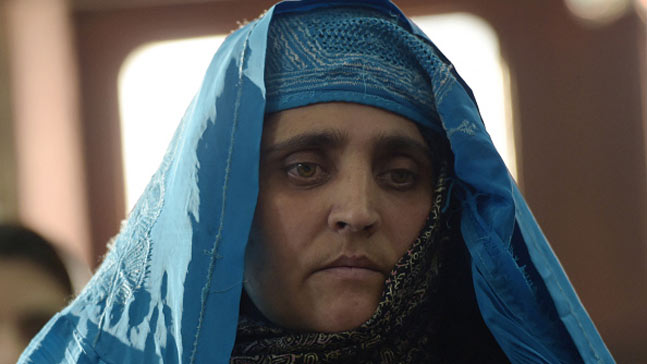 Sharbat Gula pictured at the President's palace in Afghanistan in 2016. Photo: Getty Images

WHERE WAS SHE BEFORE BEING EVACUATED? Sharbat Gula lived life peacefully and anonymously in Pakistan for over 30 years after fleeing Afghanistan in the 80s. However, she was arrested by Pakistani officials in 2016 on charges of possessing fake identification papers. She was jailed and eventually deported to Afghanistan.

Finally, Sharbat Gula went back to her birthplace. The previous Ashraf Ghani government in Afghanistan welcomed her with open arms. She was given a house and a land of her own, and also a monthly stipend for her and her family’s expenses. Fast forward 5 years, Ashraf Ghani has fled the country and there's a Taliban government in power.

WHAT WAS HER LIFE AFTER NATIONAL GEOGRPAHIC? After the picture was clicked in 1984 and published the next year, Sharbat Gula went on to live life normally without knowing about the publication of her picture or how famous she had become. She was married off at the age of 16, just 4 years after the picture was taken.

She lived most of her life in Pakistan. In an interview with the BBC, she said it was a good life. She also felt that Afghanistan was only her birthplace and Pakistan was her homeland.

17 years after the iconic picture was taken, photojournalist Steve McCurry, went on a search for the Afghan green-eyed girl. He found her. It was then that she came to know about the famous picture and the difference her picture made to the struggle of Afghan refugees.

Sharbat Gula's life centred around her husband and their three children. However, she lost her husband in 2012 to Hepatitis C.

CONTROVERSY OVER THE PICTURE: The famous moment frozen forever in time and history also brought along a bit of controversy.

When the picture was clicked, we didn’t know much about the Afghan girl; not even her name. In the 2002 National Geogrpahic cover story, A Life Revealed, we got to learn more about who the girl was. We also got to know that Sharbat Gula felt sad, angry and nervous when she learned about her world-famous photograph. Sharbat Gula is a conservative Pashtun. It is against their culture for a woman to reveal her face or be photographed by a man outside of her family.

In the BBC interview, Sharbat Gula said that the picture created more problems for her than benefits. She also blamed her picture for her arrest in Pakistan.

Sharbat Gula and her family have become refugees again. Now, she’s living in land far from her birthplace or her homeland. Looking back, it seems her powerful world-famous picture changed the course of even her life.

#Taliban, #Afghanistan, #Italy, #Afghangreeneyedgirl
The views and opinions expressed in this article are those of the authors and do not necessarily reflect the official policy or position of DailyO.in or the India Today Group. The writers are solely responsible for any claims arising out of the contents of this article.