All publicity is not good publicity.

'Customer is king' — every marketing class must have started with this fundamental lesson. Going by this, everybody today is a king and their kingdom is geographically defined by the number of likes and retweets they get on social media every time they bash some corporates online, often at the drop of a hat. If customer is 'king', then everybody has an empire today.

We are not talking about some Pooja Singh, who is a “proud Hindu” with over 18,000 followers on Twitter, who apparently has no belief in the work ethics of a Muslim. Neither are we talking about “pure vegetarian” Abhishek Mishra, the VHP member who cancelled an Uber as the driver was Muslim.

We are talking about less bigoted customers whose Twitter activities are only confined to outraging against corporates. There are many of them. Every minute, dozens of angry tweets are being manufactured

They have angry tweets ready in drafts, and thumbs on the tweet button. Make them wait a split second more in a queue, or tell them that their orders are 15 minutes behind in schedule. They will immediately take to Twitter and spend the next 15 minutes in reframing the angry tweet before hurling it on the rant-platforms. No better way to spend the extra minutes waiting for the order! 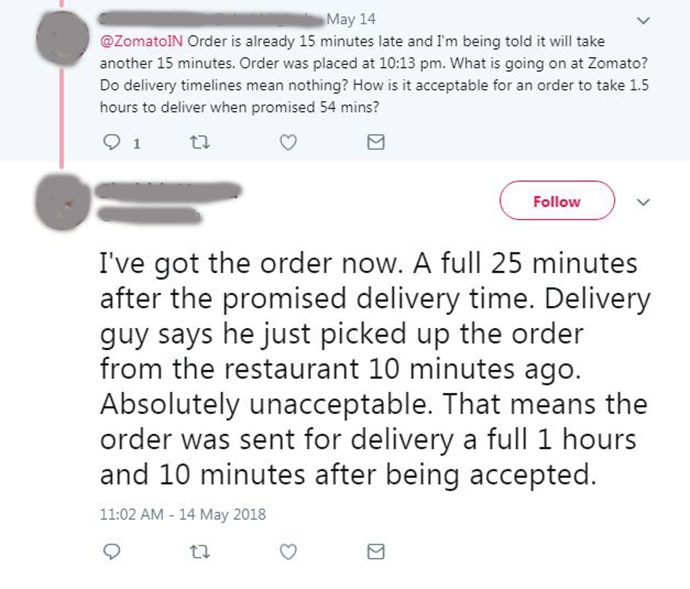 For the corporates, it must be a show of transparency and responsiveness that they don’t keep their customers waiting.

But such prompt replies from corporates on a platform where getting noticed (read retweets, likes and followers) is not at all easy - it must offer a sense of entitlement to these angry customers. It becomes harder for them to shed the garb of anger which won them apologies from the likes of Airtel, Ola, Uber, Swiggy, Zomato, the list goes on.

So, they are generally angry and they will tell you that on all possible social media platforms. Then they will leave a nasty review on the site.

This can be called flexing muscle on social media. Hello Airtel, I am surviving with Reliance Jio!!

If you are Airtel, your angry customer will tell you that he/she is thinking of switching to Vodafone, or how your network is almost non-existent while Reliance Jio is what has kept his/her life running.

Obviously, this is a cheap trick to make you jealous, so that you pull up your socks and immediately fix everything.

But then, these whiny customers often forget that they are probably not in a romantic relationship with the corporates, and the name of the rival company will actually not make their blood boil. The difference between "look into" and "look at"

Those who love small talk

They indulge in some small talk with customer care representatives and make sure they say the last words.

For example, if the representative replies, “we are looking into the issue”, they will make sure that it’s “look into” and not “look at”, which may remind you of your school teachers who used to tell you that just looking at the books will not enrich you any way.

As we talk about these angry individuals on social media, who love disciplining the corporate giants on social media, there remains the hate brigade who often storm Twitter with their ban/boycott/uninstall agendas. Those tailor-made threats are not everyday affairs and they don’t mess with some Shoaib or Gagandeep. They give clarion calls to boycott SnapDeal for its association with Aamir Khan, Amazon for Swara Bhaskar and JW Mariott for taking Atul Kochhar to task. In the age of Twitter, teeming with over-entitled consumers, it’s time the marketing books were revised. Customers are not always right and all publicity is not good publicity.

In this instance, one may remember how US candy brand Skittles shut down Donald Trump Junior when he had posted a photo of the candies and compared Syrian refugees to a bowl of poisoned Skittles. This was before the 2016 Presidential election and Skittles put out a statement saying that skittles are candy and refugees are people. “We will respectfully refrain from further commentary as anything we say could be misinterpreted as marketing,” it had said.

Also read: A fictional account of what went down at the Airtel office where Shoaib and Gaganjot work

Post your comment
#Social Media, #Ola Cabs, #Airtel controversy, #Twitter Trolls
The views and opinions expressed in this article are those of the authors and do not necessarily reflect the official policy or position of DailyO.in or the India Today Group. The writers are solely responsible for any claims arising out of the contents of this article.