Alwar lynching: How on July 20, India turned into one big lynch mob

The mask is off.

An epidemic of mob violence has been unleashed and it's apparently a free-for-all. What began with faceless mobs lynching people in the name of cow protection now has the state, its legislators and those tasked with ensuring the safety and security of Indians, all of us Indians, turn active participants and patronisers of this violence.

Alwar, Rajasthan, has seen the consequence of what happens when the state turns against a section of its own people and seems to allow its instruments, such as the police department, to wreak havoc with horrifying impunity. Who killed Rakbar? This lynching has state sanction written all over it. (Source: Twitter)

The lynching of Rakbar alias Akbar on July 20 is a chilling case of police complicity with lynch mobs, euphemistically called 'cow vigilantes', specifically out to target Muslim men.

Sample this. The police received information about a suspected case of cow smuggling at around 12.41am on the intervening night of July 20-21. It managed to take Rakbar to hospital only around 4am by when he had succumbed to internal bleeding caused by broken ribs.

What happened between 12.41am and 4am is a story of a failed state where minorities and their bodies are traded for votes, their killers garlanded and offered sweets, making it clear that our hearts no longer beat for the widows of the dead and their children — some so young, it will take a few years for them to even know what happened to their fathers.

At 12.41am, the police in Ramgarh received a call from the chief of the VHP's local Gau Raksha cell, a Naval Kishore Sharma, apparently stating that "some people (Rakbar and his associate Aslam) are smuggling cows from Rajasthan to Haryana on foot". Police officials in Ramgarh then met Sharma outside the police station and headed towards Lalwandi, just 4km away, where the incident took place. An Indian Express report claims Sharma was informed about the incident by his nephew. Sharma has also told the newspaper that the police reached Lalwandi by 1.15am-1.20am and found Rakbar lying in mud.

Two cows, in whose name the terror was unfolding, were found tied to a nearby tree. Most people, who got hold of Rakbar and Aslam had fled, but some stood there. Aslam too had managed to escape.

The police then put Rakbar in a jeep and, instead of taking him straight to hospital, allegedly took him to the village first. Villagers have confirmed to multiple news agencies that they saw Rakbar being kicked and abused by the police. He was given water and a wash. On the police's instructions, the villagers then gave a pair of clothes for Rakbar. They apparently put him in the jeep again and headed for the police station in Ramgarh.

But they were in no hurry yet.

They apparently stopped on the way for tea.

After this tea break, the team reached the police station, where Rakbar's clothes were changed.

Sharma claims Rakbar was beaten up by the police officials even as he was being questioned. Sharma left the police station at 3am to take the cows found with Rakbar to Sudha Sagar Gaushala on Alwar Road. He says Rakbar was alive when he left — but when he came back at around 4am, he had collapsed.

He was taken to Ramgarh CHC but declared brought dead.

The easiest thing to do is to pin the blame on the faceless and nameless 'cow vigilantes', or even the police officials who have apparently behaved like bloodthirsty ruffians having fun in the misery of a dying man. But these men are just puppets in a bigger game, one based on the premise that political battles must take precedence over the lives of the poor, the marginalised, the powerless.

No police official in this country can behave in the manner in which Alwar police reportedly behaved without at least a tacit backing of the state — a state which has maintained such a deafening silence over the issue that it threatens to now blow us apart.

Rajasthan is not new to lynchings, nor is Alwar. In 2017, Pehlu Khan, a dairy farmer from Nuh district in Haryana, was lynched in Alwar. All six accused named by him in his dying declaration went on to get a clean chit from the police. Many columns were written on the need for Prime Minister Narendra Modi and Rajasthan chief minister Vasundhara Raje to break their silence and condemn the killings, issuing a firm warning that such actions won't be tolerated under their rule. Yet, the two leaders and many others across India remained silent.

More shamefully, when some spoke about lynching, they only ended up supporting the violence. Union Minister of State for civil aviation Jayant Sinha went so far as garlanding and posing for pictures with people convicted for lynching in Jharkhand. Both Sinha and Meghwal continue in their respective positions. Nobody has even reprimanded them for their behaviour, forget about being sacked as ministers or even suspended as party members.

Worse, India's home minister Rajnath Singh, during his recent speech in the Lok Sabha on the no-confidence motion, said lynching is not new as the anti-Sikh riots of 1984 were also a case of lynching.

Singh needs to be reminded that he was not voted to power to follow in the footsteps of the Congress which the BJP has replaced. He and his party were given a brute majority to not rule with brute force but to ensure a rule of law that doesn't threaten snatching away from people their right to life.

But lynching is now legitimate in India

Coming from Union ministers, these speeches have now legitimated killings in the name of cows. It is thus not surprising that the police in Alwar thought it was okay to pack a man callously into their jeep, sipping cups of tea even as the man lay groaning in pain, near to death. Give him a wash, force him to change clothes, beat him, abuse him — then take his body to the hospital.

Is it possible that if the chief minister issues a stern warning to the police department stating that cases of mob violence targeting communities is to be dealt with utmost strictness, the order won't be followed? Why haven't these chief ministers issued this warning? Or has the police received some other message?

Police in Alwar were only following a precedence set by the police in Uttar Pradesh's Hapur, under whose supervision a man named Qasim was recently dragged after being brutally beaten up by a mob. 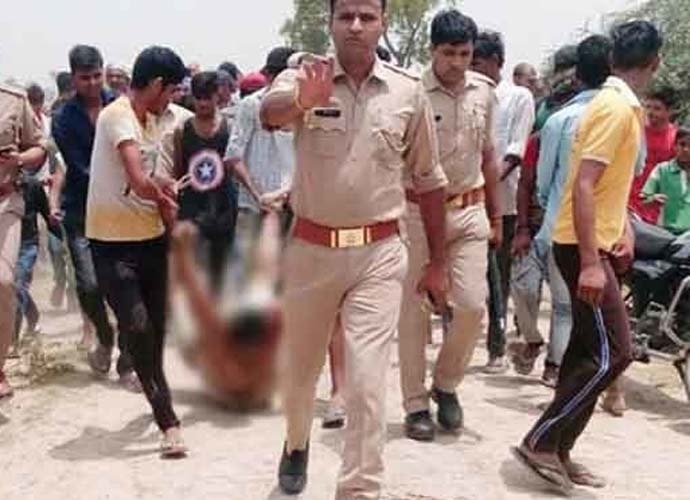 Qasim was dragged after being beaten up even as the police watched.

There is an acrid debate on social media about the 'data' on lynching presented by IndiaSpend. It is a shame that we need to prove the true horror latent in these cases by showing that the numbers are colossal.

The state is accountable for every single life lost to hate and non-existent law and order. The BJP can't get away by comparing (or refusing to compare) numbers with what happened under the Congress, it is every bit answerable for what is happening in the new India that it promised us.

Why do we need data to tell the state that it needs to act on cases of lynching at a time when even those who do not consume news are aware of this? Why can the state not see what we can see?

And, more importantly, is it possible to make the state see if it refuses to?

The BJP showed this country a dream of a new beginning, but it has given us instead a medieval society where violence is so normal that it can be planned and executed, while law enforcers sip cups of hot tea.

We are in deep, deep trouble.

PS: A high-powered committee has been constituted to look into the allegations against the police in the Alwar case. No committee, no matter how powerful, can bring back the dead. We need measures to ensure not one more drop of blood is shed in this manner, no matter how 'sacred' the cause.