With Amitabh Bachchan sending a condolence message to Amar Singh and Singh regretting his overreaction against Bachchan, we wonder if the two are ready to bury the hatchet.

Friendship Day 2020 is months away, but Tuesday saw an old friendship show signs of revival. A friendship between politics and Bollywood. Actually, a politician and a Bollywood superstar. You guessed it right if you guessed that we are talking about Amar Singh and Amitabh Bachchan.

It all started when Bachchan sent a condolence message to Amar Singh today because it was the death anniversary of the latter’s father. And that message, it seems, has melted all the anger and angst Singh held in his heart for Bachchan and the Bachchan family.

In case you missed it, this is what Singh tweeted:

Today is my father’s death anniversary & I got a message for the same from @SrBachchan ji. At this stage of life when I am fighting a battle of life & death I regret for my over reaction against Amit ji & family. God bless them all.

Singh did indeed say a lot about the family. So much so, that it became difficult to believe that the two had ever been friends. The two were such thick friends that they used to attend each other’s family functions and even go to parties and events together.

At one such event organised by actor Shah Rukh Khan and producer Karim Morani, where the two went together, Singh entered into a physical scuffle with Morani. Do you know why that happened? Amar Singh and Amitabh Bachchan were apparently given seats in the 10th row. The two got so miffed, they got up to leave. At this point, Khan and Morani stepped in and offered to shift the two to the front row. But Singh, who had cajoled Bachchan into attending the event, got angry, and hence the scuffle.

As the story goes, it was Amar Singh who turned things around financially when Bachchan's company ABCL was going bust. According to Singh, Bachchan said it on record, “Had it not been for Amar Singh, I would have been driving a taxi in Mumbai.” 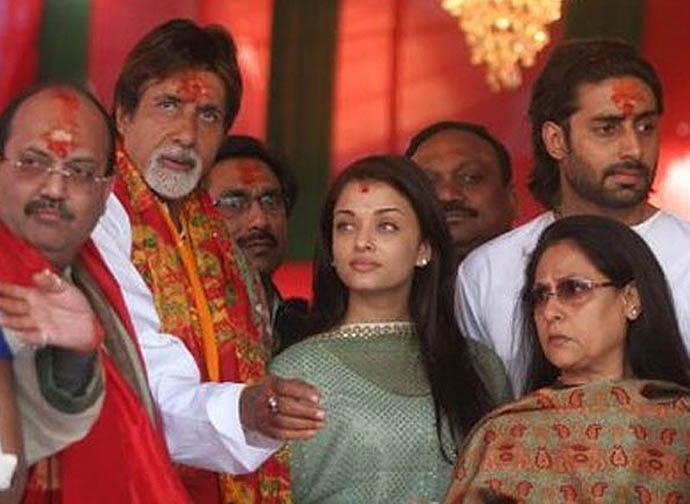 Amar Singh was at one close not just to Amitabh Bachchan but his entire family. (Photo: Twitter)

Now, we have no records of Bachchan saying it, but it is in Singh’s records.

You may be wondering how and why did such a strong friendship break. Have you ever been miffed with a friend who hasn’t spoken to you or not visited you during your tough times?

That’s exactly the grudge Singh claimed to have held against Bachchan till the latter messaged him. In 2011, Singh was arrested in connection with the cash-for-votes scam. He was lodged in Delhi’s Tihar jail. During this phase, Bachchan never visited Singh. Even Reliance Group chairman Anil Ambani, who was a close friend of Singh, stayed away. And Singh couldn’t forgive his friends for the same.

In an interview to a TV channel, Singh called Amitabh Bachchan a “a self-centred man, practical man”.

Amar Singh even accused Bachchan of being involved in the Bofors scam.

In a tweeted video message to Amitabh’s wife, Jaya Bachchan, Singh went to the extent of asking why Jaya never stopped Amitabh, her son Abhishek and daughter-in-law Aishwarya from doing indecent roles and songs. He even named the movies, songs and scenes he considered indecent.

Listen to one of the songs Singh questioned Jaya over.

Did you find it difficult to believe what Singh said it?

Anyway, we are glad that Singh has decided to let bygones be bygones. Singh is 64 and ailing. Bachchan is 77. We are told he too has some health complications. Why hold grudges at this stage? Why hold grudges at any stage? Well, because some people can totally force you down the grudge path. Try to ignore and move on.

Talking of Amitabh Bachchan and Amar Singh making up, there are two Bollywood directors breaking it up. Director Shekhar Kapur is angry with director Ali Abbas Zafar for announcing a Mr India trilogy. As soon as the news came in, Kapur tweeted, “I can only guess that they using the title to get a big weekend (sic).”

Be that as it may, Mr India (1987) was such a classic. We don’t think there is anyone who hasn’t enjoyed the movie. Everyone acted so well. Even the little kids.

Remember that scene where the kids are shown to be hungry because Arun Verma/Mr India (Anil Kapoor) doesn’t have money to buy the ingredients, and then Sridevi gets them samosas and jalebis?

The kids actually looked like they hadn’t eaten in days. Actually, it was shot right after the lunch break on the set and the children had eaten to their heart’s desire! Now, that is what we call good acting (unlike a lot that passes off as acting these days, you'd agree).

It suddenly occurred to us that we haven’t told you anything about the anti-Citizenship Amendment Act (CAA) protests going on in Shaheen Bagh over the past few days. So, yesterday, the apex court appointed senior advocate Sanjay Hegde and advocate Sadhana Ramachandran to talk to the protesters about moving the protest to an alternate site. The court will hear the matter again on February 24.

This has been going on for so long that some of us might have forgotten how it all started. While there had been opposition to the CAA, it got heated up after police entered Jamia Millia Islamia on December 15, 2019.

Did you see that video in which the police enter the reading room of Jamia and beat up students? Some police officials even had their faces covered.

Watch this and realise what kind of trauma and brutality #JamiaMilliaIslamia students faced on the hands of @DelhiPolice. Students studying in library are being attacked and brutalised for no fault of theirs.#JamiaProtests pic.twitter.com/1yxRK0Ic7b

And in its chargesheet filed today, the police have accused JNU student Sharjeel Imam of instigating the Jamia students. Read the details of the chargesheet here.We hope the court will take a fair view of the situation.

But do you know how the latest video of the police brutality came out? Actually there is no clarity on the issue. Jamia says it hasn’t leaked the video. But the video is part of the recordings of the CCTV camera in the reading room.

No matter who leaked it, it is crucial evidence.

CCTV cameras have really transformed lives. We say in both good and bad ways.

A CCTV system was first installed by a German engineer named Walter Bruch. That happened in 1942. But the country that has the maximum number of CCTV cameras isn’t Germany. If Arvind Kejriwal has his way, maybe India could get that distinction one day. Just kidding.

As of today, it is Britain. Research suggests, in Britain, an average person is caught on CCTV about 300 times in a single day. Perhaps, there should also be a research to suggest how much pressure that puts on people to look good. Or maybe it is so much a part of life that it has ceased to matter. According to a BBC report, many of the 4-6 million (40,00,000-60,00,000) cameras that Britain has, may not be functional.The country has about one camera for every 14 people. But then, the number of people in Britain is also nothing compared to India.

In India too, the sale of CCTV cameras is rising.

The word camera, our Word Of The Day, comes from camera obscura, which means "dark chamber" and is the Latin name of the original device for projecting an image of external reality onto a flat surface. The modern photographic camera evolved from the camera obscura.

Closed Circuit Television (CCTV) involves the use of video cameras to transmit signals to a specific location and a specific set of video monitors.

In the run-up to the Assembly elections, Delhi Chief Minister Arvind Kejriwal announced that 2.8 lakh CCTV cameras will be installed across the national capital. We have mixed feelings about being constantly under such surveillance. But maybe it will help check crimes in the city, who knows.

Have you watched that movie The Circle? It’s based on a dystopian novel by the same name, written by Dave Eggers. Watch — better still read — it to know what a world under such high-level surveillance would be and feel like.

For now, you can watch the trailer here:

And tomorrow happens to be the birthday of the founder of an organisation whose current chief’s comments over divorce have created quite a controversy. Want to know who we are talking about?

Follow this space tomorrow. We will have that and much more.