Pulwama Attack: Amit Shah’s dig at Congress is totally uncalled for. BJP must not play politics over tragedy

All parties have backed the government's leadership after Pulwama. The Opposition has as well. Then, why is the BJP making digs at the Congress?

The divisions that mark a nation are what strengthen the nation’s enemies.

In the face of grave provocation and attacks from the enemy, a nation can only stand strong if it can stand united.

After 20-year-old Adil Ahmad Dar from Lethipora village in Kashmir drove a car full of explosives into a CRPF convoy, killing at least 40 jawans in Kashmir’s Pulwama district, several calls have been made to remain united, rally behind the country’s leadership and speak in one voice — as one nation. Jaish-e-Mohammad terrorist Adil Ahmad Dar, the suicide bomber who carried out the terror attack on a CRPF convoy on February 14. (Screengrab: Twitter)

Many political parties vowed to support the government in all its efforts to give Pakistan a befitting reply for the deaths of our jawans. National Democratic Alliance (NDA) partners such as the Janata Dal (United) leader Nitish Kumar and Lok Janshakti Party (LJP) chief Ram Vilas Pawan, who had of late been bickering over various issues with the BJP, affirmed their support to the government unequivocally.

Alongside, Congress president Rahul Gandhi and former Prime Minister Manmohan Singh promised the party would not talk politics over the next few days and the Opposition would stand united with the government.

Given how vicious the political discourse has been in the recent past, this effort by parties to rise above partisan politics was indeed remarkable.

However, less than three days after the Pulwama terror attack, it has clearly been the ruling party that has tried to capitalise on the situation politically.

Shah’s comments came while addressing a convention of the Bharatiya Janata Yuva Morcha, the BJP’s youth wing in Lakhimpur, 380 km northeast of Guwahati.

BJP President Amit Shah in Lakhimpur,Assam: I pay my tributes to Assam's son Maneswar Basumatary, along with the other CRPF personnel. Their sacrifice won't go in vain as it's not the Congress government which is at the Centre, it is the BJP which is at the Centre. #PulwamaAttack pic.twitter.com/Y7F3K2HXrr

For a party that is asking the nation to stand together and back the government unitedly in this hour of a national tragedy, to then talk in such divisive tones is a hallmark of hypocrisy.

This is no time to settle political scores but to ensure that Pakistan pays for the blood of Indian soldiers lost in Pulwama.

At a time when Pakistan has not just succeeded in targeting our soldiers, but is also apparently winning at the Kashmiri narrative because of targeted attacks on Kashmiri youths in some parts of India, it is incumbent on the BJP government to take everyone along.

To say that India is in a position to give a befitting reply to a nation because of the party in power is a great disservice to our brave soldiers.

After all, it the soldiers who face enemy bullets and grenades — not parties — and it is for this reason that the soldiers should know the entire country is behind them — in one voice.

Yes, the leadership of the country is important. In times like these, a country looks to its leaders, not to politicians. The BJP must focus on providing the strong leadership it promised — it can leave the politics out for now.

It is also time for India to know that if it believes Kashmir to be an integral part of the nation, it cannot attack Kashmiri students just because some have chosen to pick up the gun.

At times like these, it is generally the political leadership which has to speak up and speak out to calm tempers and tell people not to take the law into their hands — any differences between us are only going to help the evil designs of Pakistan.

It would also have been far better if Shah, being the president of the BJP, would have questioned a party mayor who was seen laughing during a march organised to commemorate the Pulwama martyrs. 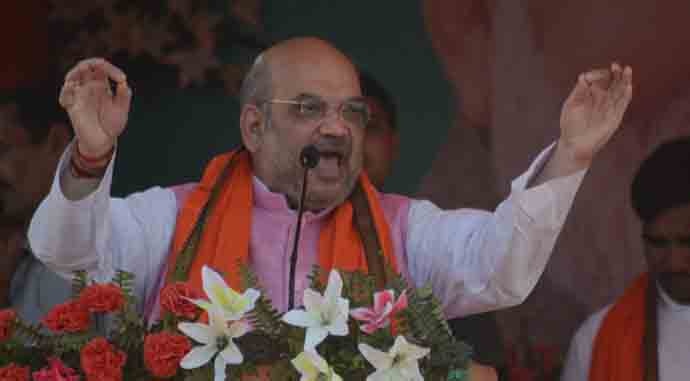 Amit Shah should have focused on cooling tempers, not stoking them. (Source: Reuters)

Elections are around the corner — but so they are every five years. Parties fighting parties at a time of national tragedy could set a precedent that India would find hard to break.

Other parties are showing restraint. The BJP must do the right thing too.

All parties can then leave it to the voters to decide which party can provide the most able leadership to the country, in times of normalcy and strain.

Post your comment
#CRPF, #Pulwama terror attack, #Pulwama, #Amit Shah
The views and opinions expressed in this article are those of the authors and do not necessarily reflect the official policy or position of DailyO.in or the India Today Group. The writers are solely responsible for any claims arising out of the contents of this article.