Amritsar to Howrah: Why a rail tragedy is waiting at every corner

Close on the heels of the Amritsar tragedy when a speeding train mowed down more than 60 people on the day of Dussehra, another accident in Santragachi, Howrah on October 23, exposed the callousness and lack of rail safety.

The latest incident caused two deaths and critical injuries to many, once again pointing at the miserable track record of the Indian Railways.

More than 60 innocent lives were lost and so unceremoniously. The blame game began immediately. Video footage showing the organiser running away, reports pointing at former MLA Navjot Kaur Sidhu for her indifference and more. 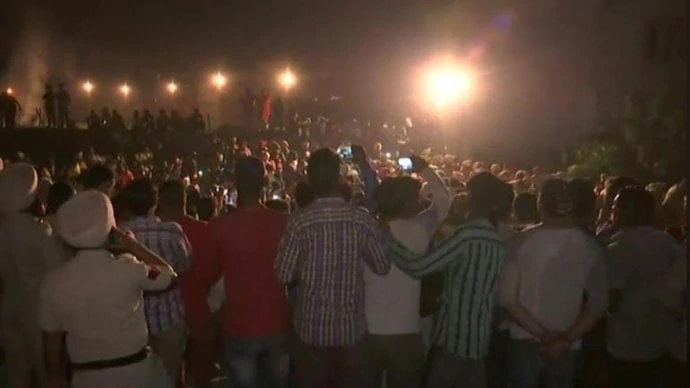 People had gathered on the tracks to watch Ravan burning and the firecrackers display. (Photo: ANI)

The engine driver says that he was given a green signal so went ahead. The engine driver and the signal man, both were totally oblivious of the disastrous consequences which was completely avoidable. It is hard to imagine so much lack of awareness of the railways operating staff. This shows that proper training and assessment of situation remain missing from the railways scheme of things. Besides, there is the Railway Protection Force (RPF) and part of its charter of responsibilities is to ensure that rail tracks are safe and secure.

Didn’t they ensure that?

A committee, comprising department heads of the South Eastern Railways says it will bear the expenses of treatment of those who sustained injuries in the stampede on a foot over-bridge at Santragachi railway stationRead @ANI Story | https://t.co/pMaMNNUEvK pic.twitter.com/brCeILOgPM

Dussehra date being in the almanac is known to all well in advance. In that case, the district administration, along with the organisers of the Ram Leela, must have liaised with the rail police and other stakeholders to ensure that trains didn’t cross the path of the bystanders.

Clearly, this was not done and the mishap occurred. Those killed are reported to be poor people, not really expected to know that trains would be killers on the day when festivities were peaking.

Perhaps if the casualty was not limited to just the ‘have-nots’, reaction and action would have been more vociferous. Judging from all accounts, the railways cannot escape the responsibility. Similarly, the state administration, including the district authorities, must apportion the blame for the deaths precisely for the same reasons. The railways’ own track record in terms of accidents at unmanned gates is dismal. Not very long ago, 13 schoolchildren, all under 10 years of age, lost their lives when a fast-moving train hit the school bus at an unmanned gate near Gorakhpur.

It would perhaps be unfair to blame the Indian Railways alone. The European Union (EU) has a record of an annual deaths to the tune of 400 and the US has 300. As many as 22 people were killed following a stampede at the Elphinstone Road station in Mumbai last year. (Credit: PTI)

The Indian Railways has a huge strength of Indian Railways Service officers (traffic services included) with the best of the civil servants. Their collective brain-storming to address this problem must be imperative and result-oriented. This is least expected of the ‘steel frame’ of the railways and from their leader, who headed the Air India too, for his managerial skills. With the introduction of the bullet train and modernisation of the Indian Railways, the tax-payer must be comfortable with the safety measures.

Just as the nation was coming to terms to the Amritsar tragedy, news came of the Santragachi foot overbridge stampede to remind us that there's a lot that's not well with the railways.

The latest incident was also avoidable like the incidents that occurred in Mumbai's Elphinstone station (2017) and the one in Uttar Pradesh almost a year-and-a-half ago.

It’s high time collective efforts are put in place to secure innocent lives and the railways need to clean up its act to check the recurrence of such events. On their part, state administrations too cannot be absolved of responsibilities.