An Icy Mystery: God, demon, prehistoric beast, the magic of the Yeti shall always endure

Some legends say the yeti prey on intruders scaling the peaks. At other times, they have been known to appear out of raging blizzards and help mountaineers find their way.

Ancient dwellers of the high mountain reaches, they are seen only very rarely — and that too, just a distant glimpse. They are feared, and yet explorers seek out signs of these strange beasts. Mountain dwellers dread attacks by them — and yet, mountaineers often hike large distances for a sighting of these otherworldly beings.

They are the stuff myths and mysteries are made of.

These beasts — half animal, half human — have intrigued mountaineers and writers for ages. Barely sighted, much written about, they are shrouded in magic and mystery. In most cases, the only indication is an enormous footprint in the snow. Past explorers who have tried to track these beasts in the Himalayan ranges spanning Nepal, Bhutan, Sikkim and India have even found strands of hair — which have proved to be a DNA puzzle — as well as scraps of skin. 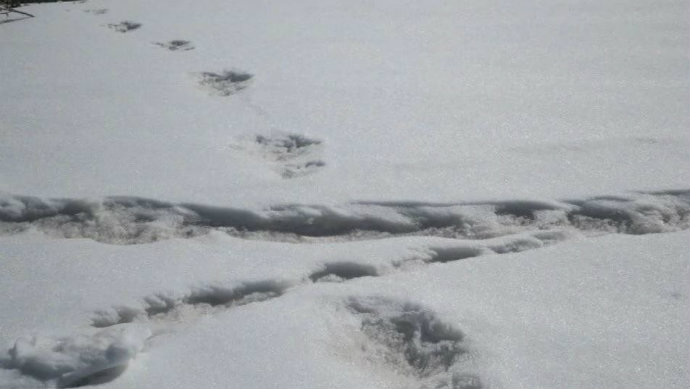 Recently, the Indian Army spotted mysterious footprints in the snow which they believed belong to a Yeti. (Photo: Twitter)

These strange beasts go by many names. Most commonly, they are called Yeti — or 'magical beast.' In Nepal, they call it a demon or 'rakshasa.' Tibetans tell of a large 8-foot-tall Yeti, called Dzuh-teh, which is violent and eats cattle and livestock. Another Yeti, Mehteh, is shorter, like an ape, and resembles humans. European travellers called the snowman ‘abominable’ because of the fear with which the Sherpas regarded it.

The first photographs of an alleged Yeti footprint were taken at the base of Mount Everest by mountaineer Eric Shipton in 1951.

Sir Edmund Hillary subsequently led a Yeti hunting expedition to Nepal — and found strange footprints in the snow believed to belong to the Yeti.

The Yeti is a mountain beast — and yet almost human. Sightings over the years have talked of how it walks on two legs and is covered with reddish-brown hair. Sherpa legends speak of how its average lifespan is believed to be more than a hundred years, and how it lives in high altitude caves in small clusters of families. Strangely, the female of the species is believed to have supernatural powers and is feared by Sherpas because they say that to sight one even from afar is sure to bring ill luck. On the other hand, if they find any bone or hair believed to come from a Yeti, it is preserved as a sacred relic — said to bestow protection upon the people.

However, if one goes further back, the old settlers who dwelt in the Himalayas were said to worship a ‘Glacier Being’ who had magical abilities. His blood and skin were said to be especially potent in certain pagan rituals and were believed to have miraculous healing properties.

High in the reaches of Nepal, the Pangboche Monastery holds a strange treasure — part of a skull and a skeletal hand, believed to be of a Yeti.

Edmund Hillary heard of this and went to Nepal in 1960, seeking the truth (or untruth) regarding this mythical animal. The scalp was in the safekeeping of an elderly woman of the village who held it for the community because they believed it brought them good luck and protection. After many attempts, Hillary managed to persuade her to part with the skull for purposes of zoological examination on the condition that he would return it soon after. While Hillary’s findings showed it to be moulded from the hide of an antelope, the locals as well as the monk in the monastery who looks after it believe it to belong to a Yeti. Pop culture has often made references to the Yeti. The most significant was in the comic book Tintin In Tibet. (Photo: Twitter)

Stories speak of how the Yeti are actually guardians of the mountains. That they watch, with glittering eyes, the intruders who scale the higher peaks, and wait for them to make a false move. When they desecrate that which is sacred to the snowy peaks, they then swoop down with anger. At other times, they have been known to appear out of raging blizzards and help mountaineers find their way. Perhaps, like a very intelligent animal, they can sense the inner person, and so, follow their own wild code as they deem fit.

A report was filed in 1938 by a Captain d'Auvergue, curator of Calcutta's Victoria Memorial, who had temporarily been blinded by a snowstorm that had swept over the Himalayas. He would have died of hypothermia in the blizzard, he said, if a 9-foot-tall figure hadn't suddenly appeared out of the raging winds and snow and sheltered him from the worst of it.

When he recovered and could see his surroundings, the creature had disappeared.

Gods. Demons. Or prehistoric beasts. The magic of the Yeti shall always endure.

Also read: Run away, Yeti: Why the Indian Army sighting 'Yeti footprints' is not good news at all