Anthony Bourdain taught me to have no reservations about life

If there ever was a good example of a bad boy, it was him. He was so bad that it was impossible not to see the good in him.

Anthony Bourdain, the chef, TV show host, writer, is no more. Bourdain was a culinary rock star, a food intellectual. Rarely does someone inspire so much about anti-life with so much humour, politics and such love for food. He once said, “Your body is not a temple, it's an amusement park. Enjoy the ride.”

Quite an anti-thesis to what one is told, again and again. To exercise restraint, to live the right way, to be a good girl/boy. If there ever was a good example of a bad boy, it was Anthony Bourdain. He was so bad that it was impossible not to see the good in him.

One of my true heroes left us today. RIP Antony Bourdain pic.twitter.com/SqvIFBj1ku

I was born in a family who did not eat meat. When I travelled abroad for the first time, if I could, I would have carried my kitchen with me. Then I came across Anthony’s writings and I realised how narrow-minded and naïve it was of me to not cut my umbilical chord with my cultural food. He taught me that food is not just a culinary delight, rather it’s a philosophy, while food habits are political.

I learnt how important it was to acquaint myself with the local cuisine to understand the local culture. As it turned out, the moment I was open to local food, I made more friends and understood an alien culture better, so much so that after a while, it ceased to be alien. Many of my childhood friends from similar backgrounds are fanatical about their "dal makhani" and "shahi paneer". They really are stuck in more ways than just their food.

What one eats is one’s choice, but you know a lot about a person who is fanatical about her/his food choice and judgmental about the other's. Without my exposure to Anthony Bourdain, I would have been a closed-minded person, and not just with regard to food.

“Low plastic stool, cheap but delicious noodles, cold Hanoi beer.” This is how I’ll remember Tony. He taught us about food — but more importantly, about its ability to bring us together. To make us a little less afraid of the unknown. We’ll miss him. pic.twitter.com/orEXIaEMZM

Anthony’s TV show No Reservations was by miles the best food and travel show. It was mesmerising to see a host being in awe and assimilating the local at the same time. Watching Anthony host this show in different parts of the world, it was impossible to miss the twinkle in his eyes, mischievous smile and an awe conveyed by the raised eyebrow. His loose shirt and denims conveying a disdain and carefree aspect at the same time. The moment he would take the first bite of an alien food, the viewer’s eyes would be transfixed on his face to know the verdict. Most food show hosts, when they have the first bite go overboard with their reactions. Not Anthony Bourdain. His reactions were a tribute to the food. And if he ate something he did not like, he would say so with a laugh, almost suggesting that he is not good enough for the food he just had.

Watching Anthony host his TV shows was like watching a reckless god, who marvelled at the chaos around him, yet who could get order just by a flick of his fingers. That’s genius.

In one particular episode of No Reservations, he was in Haiti after the devastating earthquake. Hosting a food show amongst hungry children, he did not miss the irony of it all. That’s what made Bourdain unique. He was always aware of the food around him and no less aware of the politics of privilege associated with it.

He was the quintessential bad boy. He had a history of drugs. He loved alcohol, smoked in joy and sorrow and in between. He was the perfect counter to anyone who has a disdain for any form of substance (abuse). Yet he was a phenomenal intellect.

Anyone who has read Kitchen Confidential would vouch how unflinchingly honest, wickedly funny and terrifyingly intelligent he was.

Anthony Bourdain while alive was casually walking all over the world, talking about food, culture and politics with a swagger, as if saying, "look at me – not all alcoholics are a waste". The way the ex-heroin/crack addict, self confessed alcohol lover, smoker lived his life, very few yoga gurus can.

In his 61 years on this planet, he proved that there is no one way to live a perfect life. 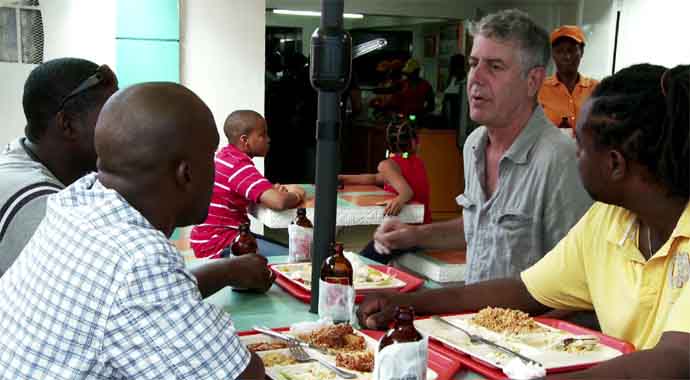 In Haiti after the devastating earthquake. [Image source: Travel Channel]

Why did he commit suicide then? Was he depressed? Was he lonely? Did he need help? Did anyone reach out to him? These are the questions that follow every suicide. Because for most of us, life is the most precious gift we have got. We want to live and we want to live happily. If someone decides to take her/his life, we assume that person must be unhappy. And we wonder why on earth why?

Not everybody who commits suicide is depressed. There are people who are pragmatic enough to realise the finality of a life, people who know when the final act is over and it is time to walk out of the theatre happily.

Post your comment
#Suicide, #Food, #Celebrity chef, #Anthony bourdain
The views and opinions expressed in this article are those of the authors and do not necessarily reflect the official policy or position of DailyO.in or the India Today Group. The writers are solely responsible for any claims arising out of the contents of this article.