Uttar Pradesh can’t run without its cops. Why one murder should not be held against the entire force

A force of 1,98,919 is all that is deployed to police a population of 204.2 million in India’s most populous state of Uttar Pradesh.

The same state also enjoys the dubious distinction of being one of the most lawless in the country. Where are the rest? The UP police is one of the most understaffed forces in the country. (Source: Reuters)

While police forces across the country are sharply understaffed, the situation in UP is particularly dismal because the number of vacancies are more than the actual strength of the personnel. UP has 214,335 vacancies as compared to the sanctioned strength of 413,254 armed and civil police personnel.

It is by far the highest in India.

A study by the Bureau of Police Research and Development (BRPD) and Administrative Staff College of India (ASCI) has found that 90 per cent police officers work for more than eight hours a day — 73 per cent do not get a weekly off, even once a month.

The study titled 'National Requirement of Manpower for 8-hour Shift in Police Stations', observed that long working hours were the reason police officers were not fit and healthy and also behaved rudely with the public, which further diminished the image of the police in general.

Against this background, the scathing criticism directed against the UP police seems a bit over the top. While there is no justification at all to the manner in which constable Prashant Chaudhary shot Apple executive Vivek Tiwari dead, branding all police men as 'killers on the prowl' is unjustified.

Children holding up posters asking police “not to shoot” after Tiwari’s murder goes on to simply create an atmosphere of deep mistrust between the people and the police. This is also highly demoralising for the police personnel who are tasked with maintaining law and order 24 hours in the state. 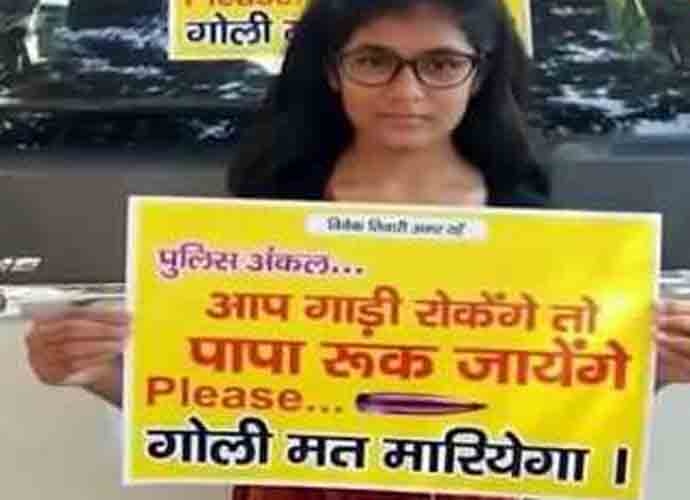 Posters asking police 'not to shoot' could be demoralising for the personnel. (Source: TV grab)

The issues of occupational stress and associated mental and physical health-related issues are simply not given adequate importance. The callousness meted out to the force also creates further callousness within the force.

Chaudhary could have been a trigger-happy police official.

But is it fair to call the entire police force that?

Does it not add to the overall demoralisation of underpaid, over-worked police officials?

No state, including Uttar Pradesh, can save itself from turning into a lawless den of constant crime if the cops are taken off the streets, even for one day.

Because they protect, they do not enjoy the licence to kill — but because one official or one group of officials goes awry, we shouldn’t brand all as lumpens simply wanting to kill citizens.

While police reforms have been ignored in the country, the lowest rung of the department has been further marginalised. The most glaring omission has been the welfare of the constables who serve as the actual interface between citizens and the police.

In July, when the Supreme Court issued a slew of directions on police reforms, the constabulary remained an ignored lot. The SC focused on measures like fair selection and job security to the DGP — completely ignoring the fact that the core of Indian policing remains the constabulary. There are good cops too. UP Police has seen its members give up their own lives to save citizens. (Source: Facebook)

The neglect starts early on. Policemen are trained in the most cavalier manner in UP. Most training camps across the state lack even essential facilities.

Without paying any heed to the conditions in which they operate, this value judgment being passed on the entire force now will not help the cause of administering a state that, according to the National Crime Records Bureau, is the worst in terms of law and order.

A total of 479 policemen lost their lives while on duty across India between September 2015 and August 2016 — as many as 116 belonged to the UP police force.

To ignore this sacrifice would be a disservice to those who serve us even at the cost of their own lives.

It is difficult to quantify the loss that UP would have suffered, had these 116 people not stood in the way of lawbreakers.

Chaudhary’s crime should not be used to blemish this sacrifice.