'A masterclass in how you can turn anything into a press release.'

This one comment accurately sums up Arnab Goswami’s much hyped AMA (Ask Me Anything) on Reddit India. The funny thing is the name Ask Me Anything does not imply that the person being questioned will answer. And that is what the great Arnab Goswami did. Of course, no one really expected the man to answer hard-hitting questions, but to blatantly answer everything but them was what made this AMA beautiful.

Of the handful of questions Goswami did manage to address, the replies were nothing more than a few of his core (and delusional) beliefs, some military fetishisation, a little PR for his new news channel Republic TV, and aggressive nationalism. Oh, and pot-shots at an editor’s nationality, just because the man in concern seems to disagree with him a lot. In short, it was basically your bigoted WhatsApp-forwarding uncle answering nuanced questions on media, governance, accountability and ethics. 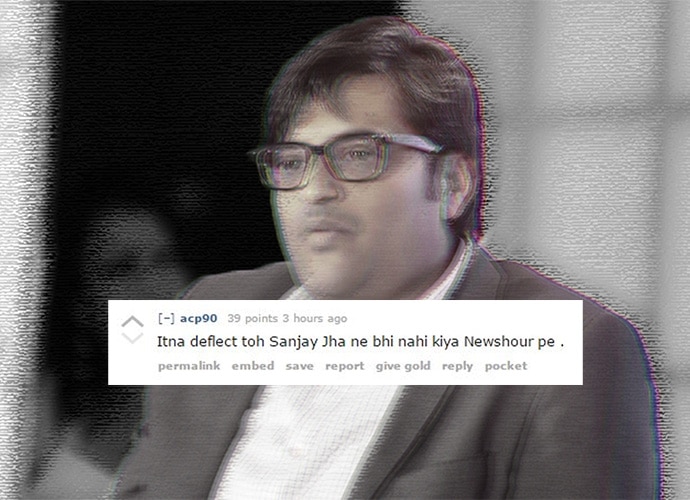 Both Reddit and Twitter users had a field day with Goswami’s answers. After all, when the most controversial (and loud) television anchor is on the receiving end of tough questions, who wouldn’t grab the popcorn?

Have you ever seen Arnab Goswami getting roasted? Dodging questions? No? It's happened on @redditindia right now.https://t.co/VmkIYgyJOJ pic.twitter.com/ZWnd2g0XTi

.@redditindia Answered the 'Toothpaste मे नमक है?' question but nothing about press freedom & whether media in India is truly free. Yeah OK. pic.twitter.com/EnvYypAnzO

Sadly enough, even Priyanka Chopra’s disastrous AMA on Reddit India, looks like an adorable kerfuffle when compared to Goswami’s.

.@redditindia Oh man. Who gave him this idea of doing a Reddit AMA? These things become a disaster in a jiffy. He should have consulted Priyanka Chopra.

THE NATION WANTS TO KNOW WHY ARNAB COULDN'T GIVE STRAIGHT ANSWERS TO ANYTHING ON REDDIT EXCEPT ABOUT SALT IN HIS TOOTHPASTE.

A Redditor calling him “Desi Sean Hannity” is extremely on point.

Hopefully, Goswami realises just how badly this Q&A went. If his guests start taking a page out of his book and refuse to answer his questions, and instead ask him to breathe (which he should, given how much he shouts), it would be highly amusing.

Arnab Goswami reading his own answers in the Reddit AMA pic.twitter.com/RBwgFpG73N

Of course, while a lot of people laughed, some realised this AMA is more disturbing than funny.

He's "pro-military", he believes the army should have greater power in Kashmir & he doesn't seem to care for freedom of press in India. pic.twitter.com/0fIcrZ0BQ2

This is scary stuff, coming from a journalist. A journalist who's channel will most probably be one of the most watched here.

Worst of all. He's an editor who can only think of diminishing the work of another editor by questioning his nationality! pic.twitter.com/OVYHl4PFDc

8/x: Asked about freedom of the press, he replies that freedom is a state of mind: https://t.co/5AmbMxfqdD (cont.)

Read the question, read Arnab's answer, and know why he is so popular among the unintelligent, the despicable, and the raving bigots. pic.twitter.com/MY9O2QHKTe

To sum things up:

Arnab's AMA is a masterclass in how you can turn anything into a press release.

PS: Some genius on the interwebs made a comparison of the answers given by Goswami in his AMA and those given by Rahul Gandhi during his interview with Arnab Goswami. The pattern is uncannily similar. 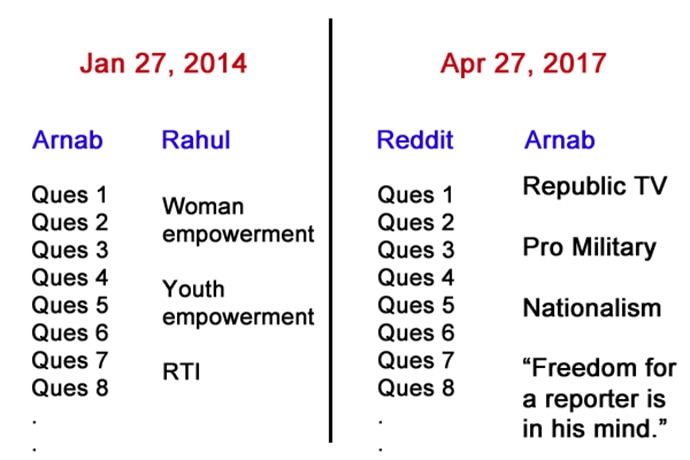 Also read - This is Arnab Goswami. Ask me anything, Redditors. I won't answer

#Republic TV, #Reddit, #Arnab Goswami
The views and opinions expressed in this article are those of the authors and do not necessarily reflect the official policy or position of DailyO.in or the India Today Group. The writers are solely responsible for any claims arising out of the contents of this article.