This is Arnab Goswami. Ask me anything, Redditors. I won't answer

The master of shouting marathons on his own TV show happily evaded every hard-hitting question thrown at him.

The nation finally gets a chance to know.

One of Indian television media’s most iconic and controversial figures, Arnab Goswami, has finally been on the receiving end of questions. The man (in)famous for his loud, kangaroo court-style TV debates – “The Newshour” on Times Now, had today made himself available for an AMA (Ask me Anything) on Reddit India.

After quitting Times Now as the editor-in-chief, Arnab Goswami had announced the launch of his own news channel Republic, a venture that would mark departure from what is traditional journalism and something that would decidedly be “independent” of biases.

The independence of Goswami’s venture, of course, has been one that has been highly contested. According to reports in January 2017, one of the largest investors and a director in Republic TV was found to be Rajeev Chandrasekhar, who has been a Rajya Sabha member from Karnataka since 2006, and was appointed vice-chairman of NDA in Kerala in September 2016. Chandrasekhar, according to reports, had invested over Rs 30 crore in ARG Outlier Media Private Limited, the company that owns Republic TV.

According to a report in The Indian Express, on September 21, 2016, Amit Gupta, CEO of Jupiter Capital – a company founded by Rajeev Chandrasekhar in 2005 - in an email to editorial heads, specified a few requirements for the editorial staff.

His mentioned the criteria required the editorial staff to be "right of center", "Pro-India”, “Pro-Military", etc. The email ended: “Offers being rolled out shall be summarised and shared with Chairman’s office as regards the credentials (only) and hiring managers have to ensure that the above has been ticked appropriately.”

The following day Amit Gupta requested the editorial heads to ignore the email.

And while Arnab is being asked the right questions, the man himself is not so on point when doing the same. After the Maoist attack on CRPF personnel in Sukma, an ambush that cost the nation the lives of 25 jawans, Republic TV decided to ask a few "hard" questions.

These question, of course, were not directed towards the state, the measures taken towards the long-standing problem that is the Maoist insurgency in central India, or towards the centre and its half-hearted measures to empower the CRPF, but rather towards the liberal media, something he is a known hater of. 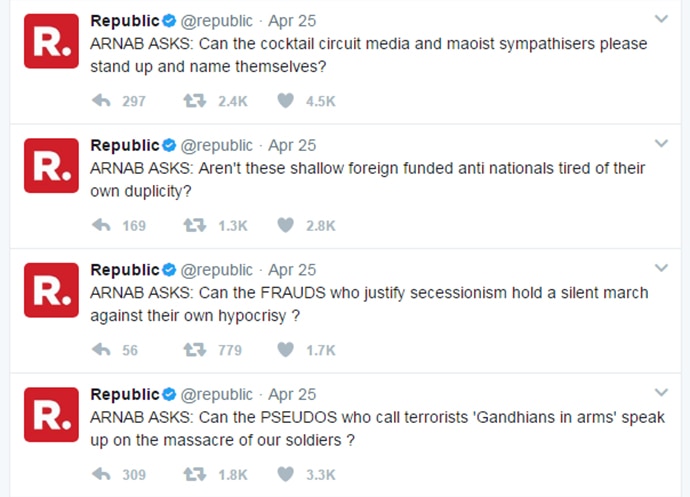 Then again, directing empty questions towards the "pseudos" and the "cocktail media" is the easier way out, when the alternative is questioning a government he's famously partisan towards. Unsurprisingly, the master of shouting marathons on his own TV show, seems to have happily evading hard-hitting question thrown at him.

One of the first questions he “answers” is about his new channel and its ownership.

"You have been promoting Republic TV as an unbiased media outlet with no conflicts of interest. But with Rajeev Chandrashekhar, a strong BJP supporter and Rajya Sabha MP running the show, and Anupam Kher, another vocal BJP supporter whose wife is a BJP MP, being associated with the channel, how can you say that there won't be bias? And why was an article by The Wire highlighting the same taken down when you yourself advocate freedom of press?

You have talked about creating a media outlet with an Indian focus and a global audience, similar to the likes of BBC, CNN and RT. Do you aim to take Republic TV in that direction, or is it just a right-leaning news channel for local audience, a la Fox News?"

Goswami successfully strung a few sentences together that did not address a single one of the points in the above question. He wrote, “I am very proud of all my partners. Each one of them believes in my journalism. I am proud of the investment we have received from Asianet News. It is India's oldest private news channel. Rajeev is a nationalist and we share a great rapport. About The Wire, less said the better. They are using my name to try and get some followers on their crumbling news site.”

User “swacchreddit” asked two important questions: “It is generally held that the majority of Indian mainstream media have a politically left-liberal bias. The number of media outlets and journalists that are 'right leaning' are much fewer. Do you think this is true?

Why is what we regard as 'national media' mainly limited to a handful of English and Hindi news channels based in the Delhi/NCR region? Most of their reporters are based around the capital so their coverage is quite skewed by what Rajdeep Sardesai calls 'the tyranny of distance'.”

Goswami’s “insightful” answer is testament to his ultra-nationalist ideology.

“The whole left-liberal phrase is a charade. How can the Delhi Gymkhana circuit be leftist? Leftists cannot be liberal and those who are liberal cannot be leftists. So it’s also an oxymoron.

Yes there is a need to balance the narrative. We have had historians who had the temerity to classify Bhagat Singh as a terrorist. These people must be brought off their pulpits. These people have had a disproportionate share of voice because a large section of the traditional legacy media has co-opted them and given them space in editorial pages and TV. I’m trying to change that. We need a fresh new group of people who lead opinion in India. They need to be from across India, not a 5x5 km zone from Malcha Marg to the JNU campus. Trust me; we will make that happen with Republic.”

Another question that is poignant in illustrating Goswami’s disdain for the existing liberal media was asked by user “TheDreamr”: “You have been one of the most vocal TV journalists India has ever seen. There have been a lot of attacks on journalists lately. Where do you see India in terms of Freedom of Press in next 10 years?”

The answer is woefully self-centred and blind to others' predicaments. Goswami says, “Freedom for a reporter is in his mind. I broke many scams and many more are to come. Nobody threatened me. Threats should be water off a ducks back, for journalists.”

Of course, the best of the AMA comes in the form of a really long list of pertinent questions asked by user "jaunty2410". Every question in was about Arnab not holding the government accountable where they failed, about his channel's connection to the ruling party, and his obvious disdain for intellectuals.

Almost exactly like an episode of "The Newshour", Goswami behaved like a panelist and did not answer a single thing. Instead, he asked the Reddit user to breathe. So much for an "Ask Me Anything", eh? On the issue of Kashmir, Arnab Goswami’s Army fetishisation and nationalism is cloying as he defends the Army tying a civilian to a jeep, as a shield against the stone pelting in Srinagar.

Goswami says, “I feel the army and paramilitary needs to be given greater powers in Kashmir. The state government must empower the J&K police. Before every election in the state, the party in power softens versus the separatists. I am appalled at the pictures of Kashmiris assaulting a soldier. That soldier must be decorated for his restraint and each of those goons rounded up. People have questioned why a Kashmiri was put in front of an army jeep. If that is the only way to stop an attack on our soldiers, I see no problem with it. No man in an Indian uniform can become prey to the cowards who shoot in stealth. I wish the legacy Indian media saw the reality.”

Ultimately, what was most apparent in Goswami’s AMA is that this was a PR exercise for his new news channel, Republic TV. Goswami, it seems, did not at the outset intend to answer any question thrown at him. (What did he expect, was this his own show?)

While he will continue to happily grill the “pseudos” on his new channel, it is unlikely that he will ever entertain questions directed towards him.

So when will the nation get its answers?

Also read - How deep is Arnab's love for Modi: Nation wants to know

Post your comment
#Reddit, #Republic TV, #Arnab Goswami
The views and opinions expressed in this article are those of the authors and do not necessarily reflect the official policy or position of DailyO.in or the India Today Group. The writers are solely responsible for any claims arising out of the contents of this article.