Such moves only deepen the sense of alienation on the ground and push Kashmiri youths towards militancy.

Article 35A gives special rights to the permanent residents of Jammu and Kashmir. It prohibits people from outside the state from buying or owning immovable property, settling permanently, or becoming beneficiaries of state-sponsored scholarship schemes. 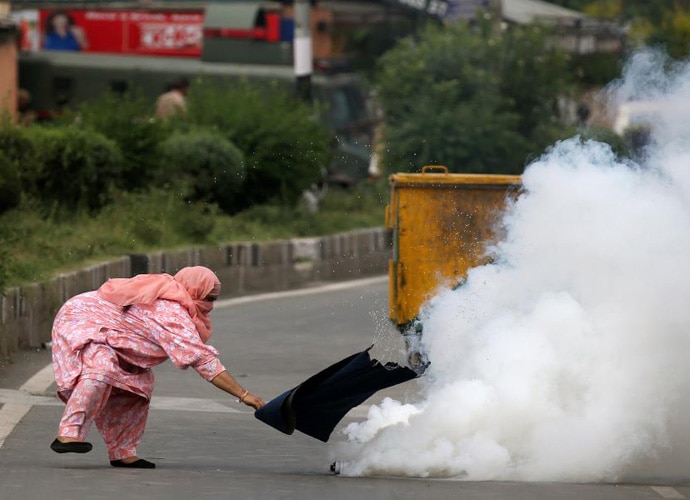 Will the smoke spread? A woman tries to cover a tear gas cannister in Kashmir. (Source: Reuters)

It also forbids the J&K government from hiring people who are non-permanent residents.

To be precise, Article 370 of the Constitution grants special status to Jammu and Kashmir, while Article 35A empowers the state legislature to define the state's 'permanent residents' and their special rights and privileges.

Even though the hearing over Article 35A has started in the Supreme Court on August 6, tension over it became palpable on the ground in Kashmir almost a week ago.

People, irrespective of their particular ideologies, have rallied behind the call given by the separatists on this issue.

The issue of Article 370 and Article 35A has always been associated by Kashmiris with their identity, irrespective of their demography or political leanings. All political parties in the Valley, including the Peoples Democratic Party (PDP) and the National Conference (NC), are on the same page when it comes to the two provisions which are seen as contentious across the rest of India.

The PDP leader and former chief minister Mehbooba Mufti has warned that no one will be left in the state to hold the national flag if Article 35A is fiddled with.

THe NC leader Omar Abdullah, on his part, has said that questioning the validity of Article 35A would be as good as challenging the accession of J&K to India.

The Centre should take the statements of these leaders as an eye-opener because these do show how seriously the matter is being taken on the ground in the state. The government of India should respond positively to his peace overtures and start a dialogue to bring normalcy to the Valley. This would help reduce militancy and give new hope to the people of the state.

Keeping in view the prevailing situation in Kashmir, the Centre should not make any attempt to tinker with Article 35A. Such moves only deepen the sense of alienation on the ground and push Kashmiri youths towards militancy — abrogating Article 35A may permanently alienate the people of Kashmir.

In fact, intelligence agencies have warned that the abrogation of Article 35A could create a divide within the rank and file of the state's police force, which has been at the forefront of bravely fighting militancy in the Valley.

For the first time, the police are allowing protests while appealing for peace. The Director General of Police, Shesh Paul Vaid, said: "I am sure people will express their views peacefully and will not take to violence. I am hopeful that things will pass off peacefully." Vaid also said that the separatists are also fighting to safeguard a provision of the Indian Constitution and that this was "a good change".

The timing to scrap the Constitutional provision is certainly not opportune. It has not been very long since the BJP-PDP alliance ended and Governor's Rule was enforced. There is a belief among the people that the Centre is ruling the state through the Governor. The abrogation of Article 35A, even the heated discussions around the same, will only deepen the belief and cause widespread discontent.

The BJP and its allies need to understand that if the situation in the Valley turns ugly, it will have an impact on the whole nation.

So, instead of trying to score political points before the 2019 elections, the BJP should be concerned about how to prevent any conflict from flaring up in the country — and how to bring the whole nation together through development.

Post your comment
#Militancy in kashmir, #Article 370, #Kashmir crisis, #Article 35A
The views and opinions expressed in this article are those of the authors and do not necessarily reflect the official policy or position of DailyO.in or the India Today Group. The writers are solely responsible for any claims arising out of the contents of this article.

The author is a socio-political activist based out of Srinagar, the summer capital of J&K.