Sukhpal Singh Khaira, AAP’s leader of opposition in Punjab, has been burning stubble, claiming to support farmers in the state.

The recent outbreak of smog all over Delhi-NCR has forced the Delhi government to take certain mitigating measures like the Odd-Even rule. The rule was first announced on December 4, 2015 by the Arvind Kejriwal-led Aam Aadmi Party government in Delhi, and was implemented in the beginning of 2016 for 15 days.

A Hindustan Times report cites sources in the government who have confirmed that the scheme will be implemented from November 13, and will continue till November 17. This scheme is a part of the Graded Response Action Plan designed by the Supreme Court-appointed Environment Pollution Control Authority (EPCA) to combat pollution at different levels. GRAP was enforced in Delhi-NCR on October 17.

Despite the AAP government claiming the scheme’s success in both the phases (January and April in 2016) it was implemented, the move in itself has not been a popular one. Even when it was first introduced, the rule received a lot of flak from not just the citizens of Delhi, but also from all over the country on social media.

Of course, there have been a few supporters of the re-implementation of this unpopular scheme.

Why are people raving against #OddEven at least the cars will be halved? Do they have any solutions? https://t.co/iyUF3mw7dq

As Delhi govt planning to reintroduce #OddEven rule, remembering the epic take by an elite. pic.twitter.com/iXaUObChwj

The number of people opposing Odd-Even far outweighs those who support it. The principal reason behind opposing the plan is simply that it is a last-minute knee-jerk reaction to Delhi’s apocalyptic pollution levels. In addition, while the Delhi government claims its success, most people are not so sure of it.

A report submitted by a Delhi government-appointed six-member panel suggests that the second round of Odd-Even fell short of expectations, because there were an additional 4 lakh cars and 1.3 lakh two-wheelers on the roads in the second round in April as compared with January in 2016. Additionally, the report added that when the first round of Odd-Even was enforced, schools were shut for winter vacations, which was obviously not the case during April 15 and 30.

Odd Even is back pic.twitter.com/yVHFE04YVE

When clueless, pull out a ghisa-pita, failed-idea yet again: like silly old #even-odd when smog is coming not from cars, but road-dust and stubble-burning. Dilliwalas are crybabies, so shove a soother in their mouths and shut them up

"Knee Jerk Reaction When Damage is Done"Whole year these jokers did nothing serious to control pollution and smoke. Now with pollution getting worse than Beijing, planning to implement #OddEven again in Delhi! pic.twitter.com/YRW9iM6fIa

If at all 'Odd-Even' has to come back, why can't we have @ArvindKejriwal as CM on Odd days and @KapilMishraAAP on even days !

Yeah @ArvindKejriwal ji what a 'masterstroke'; & just by doing this exercise for 4 days the pollution problem for Delhi will be solved for once and all (sick)#OddEven https://t.co/HXJZEuKO83

Air pollution in Delhi is another thing that needs expertise. There is no time left for silly ideas like odd-even.

But barring the supposed success or failure of the scheme, an important fact that should be taken into account is its reach. According to Central Pollution Control Board (CPCB) data, the Odd-Even exercise tackles only three per cent of the total vehicular pollution, which, in turn, is not a major contributor to the smog at present.

Stubble burning – the practice of setting fire to the straw stubble that remains after harvest – is a huge factor behind Delhi’s air pollution levels being categorised as “severe” by the CPCB. And that is where the AAP’s move becomes not only ineffective, but also hypocritical at best. 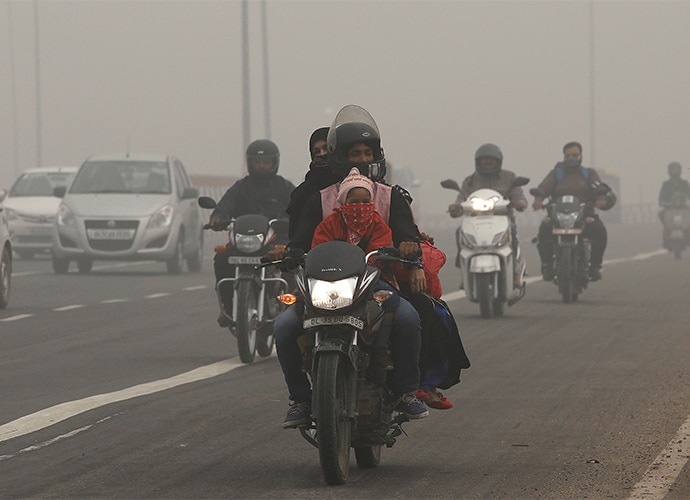 While chief minister Arvind Kejriwal is trying to seek discussions with Punjab CM Amarinder Singh about tackling stubble burning in the state, his own party members in Punjab seem to hold differing opinions, and some of them are extremely opposed to Odd-Even rule.

Financial Express reported that Sukhpal Singh Khaira, AAP’s leader of opposition in Punjab, has been burning stubble, claiming to support the farmers in the state. Khaira has openly opposed the Punjab government’s decision to book farmers for burning crops and proceeded to burn paddy stubble at a farmers’ protest in Samrala in Ludhiana on October 15. If that wasn’t all, Khaira also posted a video of the protest where he can be seen burning stubble along with AAP leaders carrying flags with Kejriwal’s photograph.

According to Khaira, the state government ought to provide equipment and machinery on rent to dispose the stubble to farmers, instead of arresting the ones who are forced to burn stubble due to its affordability. “The Punjab government has failed to carry out the instructions of NGT and farmers are suffering huge losses and committing suicide. Insofar as Delhi government is concerned, their stand is also right. If the farmers were to plough the paddy stubble into the fields, it would cost them Rs 4,000-5,000 per acre and the state government says it cannot compensate them”, Khaira told Indian Express.

Pic 1: Odd AAP - We will burn stubblePic 2: Even AAP - Why isn't Punjab doing something about burning stubble. pic.twitter.com/zw5ZTIsFYx

While individual politicians in a party are entitled to hold their own view about various issues, conflicting ideas resulting in severe environmental degradation, which, in turn, would result in skewed policy is something that the AAP should look into. Infighting should never be the cause of public discomfort.