No one's clapping: Why Arvind Kejriwal protesting at Raj Niwas fails to impress

The national capital is facing a water crisis. The Supreme Court of India has called the situation "semi-critical". Very soon, the monsoon will arrive and roads in Delhi will be submerged in knee-deep water. The court will rap the authorities for not doing anything about it. No, we don't need to talk. AAP leaders wait in the waiting room of Raj Niwas. (Source: Twitter)

It happens every year. It will happen this year too.

And it will happen because at a time when the AAP government should be busy addressing these — and many more civic issues that ail Delhi — top functionaries of the government, including chief minister Arvind Kejriwal, are "relaxing" at the office of lieutenant governor Anil Baijal.

Accompanying Kejriwal in this sit-in inside the Raj Niwas are deputy CM Manish Sisodia, home minister Satyendra Jain and rural development minister Gopal Rai. Outside the Raj Niwas, several other AAP leaders are protesting against the L-G. The AAP leaders reached the L-G's residence at about 5.30pm on June 11 and stayed the night in the waiting room. Photos of how the four spent the night lying on sofas have become a laughing stock on social media.

Joker is back in town , let's enjoy entertainment! ????????#DramebaazKejriwal pic.twitter.com/KLRCSdKTjw

The four leaders want Baijal to persuade Delhi's bureaucrats to end their four-month-old strike. AAP claims bureaucrats in the city have been striking work since an alleged assault on chief secretary Anshu Prakash at the chief minister's residence. The assault reportedly took place on February 19 when Prakash was called in to a meeting over the issue of difficulty in the release of certain TV ads relating to the completion of three years of the current government in Delhi.

The bureaucrats association has denied allegations that they are striking work.

So basically, the current protest is aimed at asking the L-G to intervene in a protest, which started after a protest', in which Kejriwal was present and protesting. That's how bizarre the situation in Delhi is, with a chief minister who is perennially in protest mode.

And Delhi isn't taking too kindly to this protest politics, which has been the hallmark of AAP's politics ever since it came to power. AAP, it must be remembered, was born out of the 2011 anti-corruption protests that started in Delhi, support for which poured in from across the country. AAP came to political life with the promise of becoming a part of the system in order to cleanse the system. But it has somehow failed to draw up an effective strategy to deal with the system (that it is now a part of) apart from launching an agitation every time it wants something from the L-G, who is the Centre's appointee in the state.

The problem with the party has been its holier-than-thou approach in dealing with political adversaries.

Led by Kejriwal, the party went about making wild allegations (with no proof whatsoever) against all political opponents, only to embarrass itself with a series of apology letters over the same allegations.

Kejriwal is the same man who, while he was chief minister in 2014, threatened to disrupt the Republic Day celebrations — a move that drew a lot of flak for the leader and the party.

But the AAP national convener has been rather slow at learning his lessons. The apologies reportedly came when the party realised its coffers were drying up and the defamation cases were getting a bit too costly — not just politically, but also financially.

He may not realise the political cost of compromising on governance for protests till it's too late. 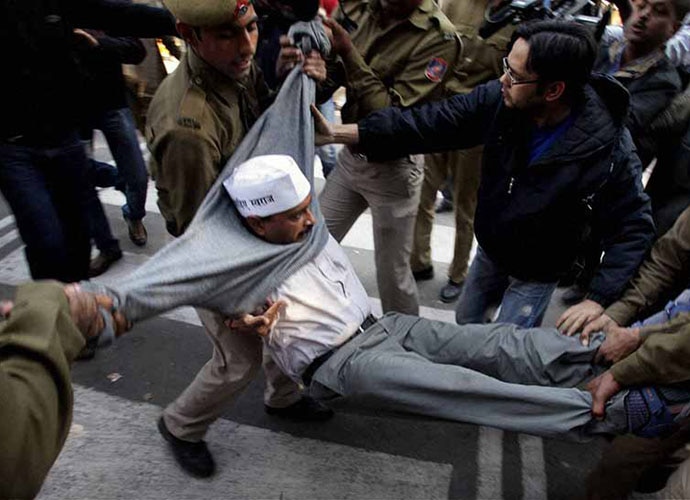 A scroll down the Twitter timelines of the L-G and the Delhi chief minister paint two starkly different accounts of what they seem to have been up to. While the L-G has been posting photos of projects inaugurated and work undertaken, Kejriwal's timeline is full of direct attacks on the L-G.

It's been more than 70 years since independence and people want change. It is this hope for change in Delhi that Kejriwal bartered for votes.

While it is understandable that his political opponents may be trying to obstruct him from working in the capital, he has only himself to be blamed for not being able to open channels for dialogue. Most state governments, which are not represented by the party grabbing power in the Centre, complain about not receiving support, about their work being obstructed. But the AAP's case is unique because the party's protests have come to define all that happens in Delhi in the name of work.

The bureaucrats have denied that they are striking work, which may or may not be true.

But an elected government is not voted to power to sit in protest.

Protests got AAP to power. But continuing in protest mode might ensure it is finally thrown out of power.