As Khloe puts up $20 tights for sale on her family website, fans question why a second-hand item is being sold for three times its original price

A tweet about selling her daughter's second hand clothes was supposed to be a nostalgic tweet. But it turned out enraging her followers who could not understand why someone would sell second hand clothes at a price more than twice higher than the original price.

It all began with a normal nostalgic tweet that Khloe posted which also had a link to the kid's section of the Kardashian website Kloset. But in a few hours, Khloe was suddenly being shamed left, right and centre for a move that everybody in her family was used to making.

Omg I miss seeing True in these outfits ?? https://t.co/LV8cTMe4O5

Khloe Kardashian had listed her daughter True's old outfits on ''Kloset''. Kloset is a Kardashian website where all family members sell a range of second hand clothing items which they have worn themselves. This includes their purchased outfits and gifted outfits by designers as samples. As each of the Kardashians has large walk - in wardrobes, each of them have enough clothes to donate or sell on their website. As per the homepage of Kloset, they provide authentic items exclusively on their website for fans to purchase. But looks like Khloe did not put two and two together when she listed daughter True's socks online.

FIRST, THE DEFINITION OF AUTHENTIC

As per Merriam Webster, the meaning of authentic is ''real or genuine''. Something that is not ''copied or false''. So when someone lists a clothing item from Target on another website, it may be the original Target item but it does not mean that it is an original Kardashian item. 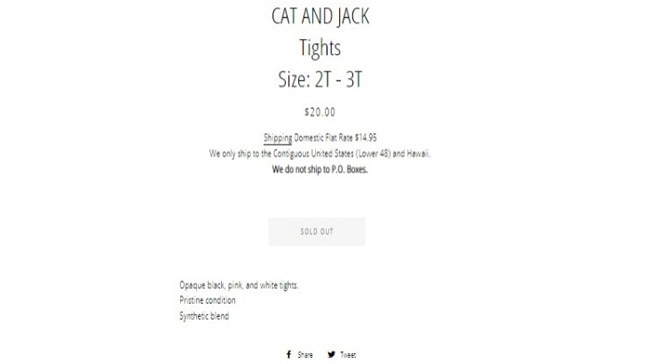 Khloe has listed many of her daughter's clothes for sale as they probably dont fit anymore. Nothing wrong with that.

Her followers particularly felt wronged when a particular ''premium'' tights was put for sale. Why? Because the listed price was $20. When you flip the sock, you can see the original price tag marked on it as $6. If you look closely, the socks are from Target.

Here are the expensive tights: Since this definitely does was become a part of ''Authentic", something that the website boasts about, fans were disapointed.

Fans were also wondering about why someone would buy $6.99 tights, use them and sell them to their fans for $20? Also why was she not donating these tights instead of selling them? It's not like she needs the money (because she is a Kardashian right?). HERE'S WHAT HER FOLLOWERS SAID:

Who would pay thar much for children's clothing let alone used. Who gives a damn about brand names. So disgusted when these clothes could be donated to people I'm need. Everything is about money with Kashdashians! I gave all my stuff away to people that could use them.

Why dont you donate you really need the $40?

I love Khloe but this should be illegal. I had no idea they were doing this. I have definitely changed my view. Remember….god is watching!

5. WHAT IS THE LOGIC BEHIND SELLING GIFTED CLOTHES ?

I don’t understand this. The family gets almost all of their clothing donated to them, they’re billionaires and the rest of us regular folk that buy our stuff donate what we no longer need. This doesn’t even go to a charity. Make it make sense.

6.  BUT SOME OF HER SUPPORTERS STOOD BY HER

Why are y’all mad about this? Why do we as non-rich people always have to count rich folks pockets? People sell clothes all the time and y’all have no idea how much she donates to feel confident to make a statement on it. If she wants to sell clothes SHE bought, mind ya business

O please! She's done more for charities and people in a month then you probably have. Why shouldn't she sell them? O cuz she's rich?! So that means she has to give her stuff away? I sell my stuff AND I give stuff away. Stop bashing her and mind your own til your perfect!

What do you think? Was Khloe right in her intentions?

#Khloe kardashian, #Kloset, #Second hand items, #Target
The views and opinions expressed in this article are those of the authors and do not necessarily reflect the official policy or position of DailyO.in or the India Today Group. The writers are solely responsible for any claims arising out of the contents of this article.