Assam floods: The tragic story of death and damage every year

The need of the hour in Assam is to have a holistic strategic plan to break this cycle of misery that has been recurring annually for decades.

The story remains the same for decades now, about the havoc and disaster caused by the devastating floods in Assam each year, resulting in loss of human lives as also of animal and livestock, destruction of crops and waves of disease, hunger, despair and dislocation. One can only imagine the state of real estate properties and infrastructure battered by floods, further disrupting the already-poor drainage system. Several hundreds of crores of rupees are washed away each year. And when the floods retreat, the destitute are sought to be rehabilitated in relief camps with poor health and sanitation facilities. The internally displaced people housed in school buildings find themselves homeless once the schools reopen. The cycle of floods and skeletal rehabilitation continues, year after year.

The topography of Assam and the meteorological factors do not help the state either. There has been a long history of negligence and misplaced priorities of the authorities regarding the overflowing Brahmaputra, dating back to the British colonial period, and perhaps even earlier. When Assam and Bihar were considered for establishing cash crops by the British, the fear of damage by floods led to the idea of building embankments. More embankments sprung up to protect crops in the flood-prone areas. The post-Independence era did not witness major changes in the policies to deal with the floods in Assam. The Assam Embankment & Drainage Act, 1953 was enacted by the state for building and maintaining embankments after the major earthquake in 1950. The successive state governments are said to have spent over Rs 30,000 crore on building embankments in the last 60 years. 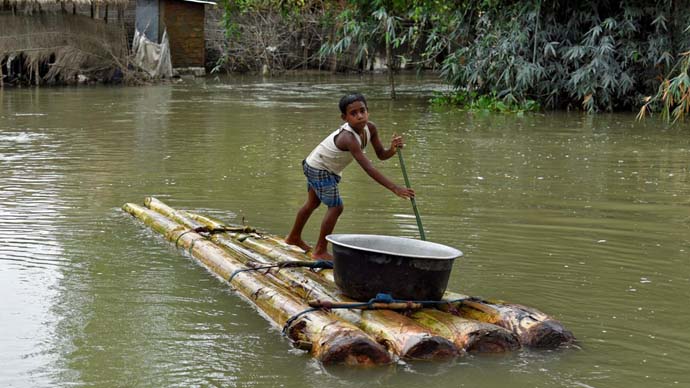 There has been a long history of negligence and misplaced priorities of the authorities regarding the overflowing Brahmaputra, dating back to the British colonial period, and perhaps even earlier. (Photo: Reuters)

The increasing intensity of floods every year speaks volumes about the ineffectiveness of these embankments. Even where embankments have been successful in protecting one target region, it has led to disaster in other areas. To illustrate: the embankment near Dibrugarh protects the town during floods, but the change in the direction of the flow has been disastrous for the nearby villages. Embankment failures have been common due to the large quantum of water that it confines and the increases in hydraulic pressure during monsoons. Yet, the policy seems to be to merely continue building embankments as the only solution to the recurring floods.

The spectacle of the blame game among the authorities has also become an annual feature — both between the Centre and the state and between the district administration and contractors. Indeed, one of the reasons behind no proper analysis of the problem and its consequences is the lack of an integrated approach by the Centre and State. The Brahmaputra Board formed under the Brahmaputra Board Act, 1980, lacks coordination with the state government, with New Delhi taking the decisions on major operations. Similar lack of coordination can be seen between the Assam Disaster Management Authority (ASDMA) and National Disaster Management Authority (NDMA). In an audit by the Supreme Audit Institution of India in 2013, the Comptroller and Auditor General revealed that the NDMA is "ineffective in its functioning in most of the core areas", and that even its rescue and relief team was inadequately trained.

No lessons seem to have been learnt for decades. Aggrieved by the apathetic attitude of the Centre, the All Assam Students' Union (AASU) has led various protests over the years demanding not only more funds but that the disaster be declared a national problem rather than that of only the state. The Centre seems to be content by simply announcing the release of funds under the flood management programme of Assam — the latest announcement being of Rs 346 crores. The response of the local populace has been to take matters in their own hands. For instance, the villagers in the Baksa District of Assam, piqued by inaction by the authorities to repair the damaged embankment, came onto the streets and initiated the repair work themselves, while roundly criticising the government and expressing gratitude to each other for the support.

It has become imperative for Assam to take urgent remedial measures. To start with, there must be a collaborative approach involving all stakeholders — the Centre, the state, the district administration and most importantly, the community. The focus has to shift from mindless construction of embankments to flood-mitigating policies that complement the existing embankments and extenuate the impact of floods.

The dams in Assam mainly focus on the hydropower benefits and lack storage space for flood control — one of the established objectives behind the construction of any multipurpose dam. Incorporating storage space in the reservoirs could be considered as a preventive measure during the floods. Hazard maps, which highlight areas that are vulnerable to floods or affected by floods, could help prevent serious damage and deaths.

Raising awareness among communities residing in the flood-prone areas, and ensuring the efficiency of the local authorities could help mitigate the effects of the disaster. It is equally important for Assam to work together with neighbouring states like Meghalaya, which shares the basin of Brahmaputra. The need of the hour is to have a holistic strategic plan to break this cycle of misery that has been recurring annually for decades. But then, is anyone listening?

Also Read: Why do the devastating floods in Assam fail to sweep national headlines?

#Brahmaputra, #Assam embankment and drainage act, #Asdma, #Assamfloods
The views and opinions expressed in this article are those of the authors and do not necessarily reflect the official policy or position of DailyO.in or the India Today Group. The writers are solely responsible for any claims arising out of the contents of this article.

The author writes on environmental issues and women's rights. She is currently pursuing a degree in law.