There was a recurrent theme in all the pictures - bearded men in skull caps or checkered lungis or kurta and pajamas rolled up until their knees.

That was around 3.09pm. But much before that these images started inundating Twitter and Facebook after Mizanur Rahman, an assistant teacher from Naskara LP school in Dhubri district, broke the news early on August 15.

Every news channel and website, including DailyO, picked up the news with pictures of headmaster Tazem Sikdar and two children standing chest-deep in mucky waters, saluting the national flag, and assuaging the fears of millions of hypernationalists that all those living in the minority-dominated district of Dhubri (which borders Bangladesh and is suspected to have a large number of illegal migrants from Bangladesh) love their country - India - and won't be told to go back to Bangladesh or to Pakistan henceforth.

For the skull cap-wearing men and burqa-clad women in Dhubri proving their patriotism becomes more important than their counterparts living in other parts of Hindu-dominated India. Bengali-speaking Muslims in Dhubri and other districts of Assam bordering Bangladesh often complain of harassment in the name of detection of illegal migrants from Bangladesh.

Who would know this better than Mizanur Rahman, who was also involved in the process of updating the National Register of Citizens 1951, according to the same The Telegraph report.

More pictures followed from more locations across the state with similar headlines. 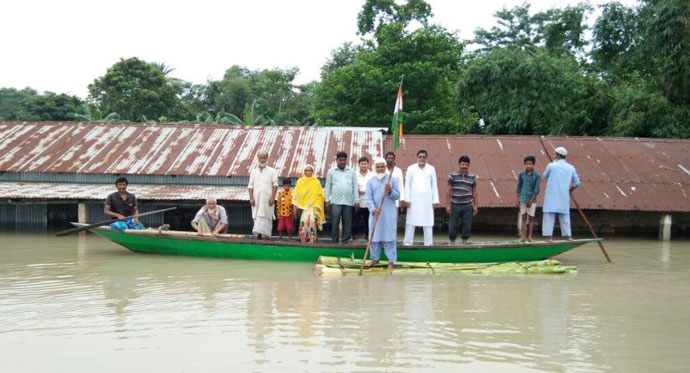 But just like the repetitive headlines, there was a recurrent theme in all the pictures - bearded men in skull caps or checkered lungis or kurta and pajamas rolled up until their knees. Some even in their gamchas.

(One can't help but wonder why didn't the education minister of Assam - Himanta Biswa Sarma - or any other senior government official join any such Independence Day celebrations in the flooded schools of Assam, something that would have definitely encouraged the students and teachers for more brave endeavours in future.)

Next day, headmaster Tazem Sikdar told The Telegraph that he had no clue how to hoist the national flag in the floodwaters.

This is what the report said:

"On August 15, there was no rain but the water had risen further. Still, by 7am on Independence Day, at least 25 students stood on a road about 10 metres away, waiting to hoist the national flag. Since it was chest-deep water for the kids, we selected two Class III students, Jiarul Ali Khan and Haidor Ali Khan, who know swimming, while the rest waited on the road."

Sikdar and three assistant teachers - Rahman, Nripen Rabha and Joydev Roy - and the two students then hoisted the flag at the school, some 2.5km from Fakirganj town and 200km west of Guwahati.

'We hoisted the flag, sang Jana Gana Mana and Vande Mataram while the rest of the students followed us from the road," Sikdar said. "In my 22 years of service, this is the first time we faced flood on Independence Day.'

Roy, one of the assistant teachers, clicked pictures of the flag. Mizanur Rahman, his colleague, uploaded on Facebook the pictures that went gone viral, drawing over 61,000 likes and more than one lakh shares by that evening."

The same report said the photographs had to be sent to Amir Hamza, the cluster resource centre co-ordinator who monitors at least 11 schools.

"That's the state government's rule. Any school event must be recorded through photographs," Rahman was quoted as saying by the newspaper.

The coordinator, a government official, then sends the pictures to the block officer, who then forwards them to the education department in Dispur, Guwahati.

While the efforts of the teachers may or may not have been motivated by the instructions of the Ministry of Human Resource Development - which had reportedly issued a circular on August 7 to all states, instructing schools to organise programmes revolving around Independence Day - the incident certainly shows traces of the prove-your-patriotism syndrome which has swept the country of late.

In Uttar Pradesh, where more than 70 children died in a government hospital in Gorakhpur just days before the Independence Day, madrasas were aksed to send photographs and videos of Independence Day event to district minority welfare officers.

After Naskara LP school managed to make national headlines - with its pictures flashing on TV screens as the ultimate example of how-to-prove- patriotism -  the school teachers and others in the village and nearby areas hope the "problems they have been facing for years will finally get the attention they deserve".

That seems unlikely though.

Ironically, this is not the first time that Rahman, who sadly lost his 18-year-old cousin to the floodwaters in Fakirganj a few hours after the flag-hoisting, posted such moving images floods.

If one scrolls down his Facebook timeline, there is a video, with the caption "flood everywhere", of a National Rural Health Mission centre crumbling due to flooding. It was posted just a day before his flag-hoisting images went viral.

Sadly, there weren't many takers for it, nor did it make to the Twitter timeline of the state health minister (which again is Himanta Biswa Sarma).

Unlike patriotism, the flood fury - worst in 36 years - that continues to wreak havoc across Assam, fails to sweep the popular sentiments of 'New India'.