How Alberto Uderzo's Asterix comics made me get through Kashmir's lockdowns

As a boy, sitting in my room overlooking the Dal through Kashmir’s many lockdowns, I rolled with laughter at the wit of Rene Goscinny and the artistic genius of Alberto Uderzo.

My father owns all 38 titles of the Asterix comic series. Given that he lovingly covered each comic with talc sheet as a teenager himself and has not allowed even a single comic book of this series to be moved from his personal library, they are in as good a condition as can be expected. My father has guarded his entire collection the way the sword-wielding Asterix and the roly-poly Obelix guarded their village from the Roman legionaries.

As a teenager, I coined the word “overcare” for my Dad and his Asterix series. The overcare piqued my curiosity. The curiosity made me promise my Dad in all solemnity that I would take care of the comic books as well as he did if he allowed me to read them. And one of the ways ‘like father, like son’ fits is here. For both of us, Asterix is right up there with all the Superhero series – with guffaws and hoots thrown in.

As a boy, sitting in my room overlooking the Dal through Kashmir’s many lockdowns, I rolled with laughter at the wit of Rene Goscinny and the artistic genius of Alberto Uderzo. Asterix with his winged helmet, bulbous nose, and horseshoe moustache and Obelix, a stonemason who had fallen into the cauldron when he was a baby (Asterix lovers know it by heart) became my childhood companions when I couldn’t go out. Druid Getafix, Chief Vitalstatistix, bard Cacofonix, Geriatrix, Unhygienix, Fulliautomatix, Roman Gluteus Maximus (I never saw it as a muscle again), Centurion Crismus Bonus and more were the cause of happy cheer in those long weeks of lockdown – and Dogmatix no less. 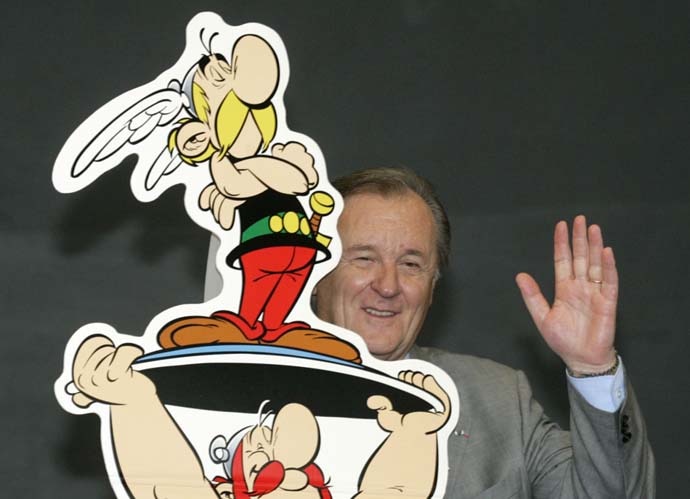 Albert Underzo, one of the two creators of the beloved comic book character Asterix passed away on March 24, 2020 at the age of 92. (File photo: AP)

What as a schoolboy I missed out on, my Dad delighted in enlightening me. Goscinny mixed shrewd wordplay with razor-sharp gags and caricatures of French politicians such as Jacques Chirac. The Fresh President made his way into the comic series disguised as a Roman economist.

Of the 38 Asterix titles, 24 were written by Rene Goscinny, with Uderzo working on the art. After Goscinny’s death in 1977, Uderzo took over the writing as well. I was thrilled to discover that Asterix and the Black Gold, which was rated as Uderzo’s best writing work, had a tribute to Sean Connery’s James Bond (Dubbleosix). Uderzo, who died on March 24 as the world grapples with coronavirus, cleverly put in a tribute to his late friend Goscinny (Saul ben Ephishul) as the Jew who guides Asterix and Obelix from Jerusalem to the Dead Sea. I can bet that if Uderzo were still writing, the charmingly named coronavirus would have found its way into the comic book – as a sidekick to Impedimenta, maybe?

Goscinny died too early, but not before witnessing the stupendous success of Asterix, which began as a French comic. The series became iconic in France during his lifetime. The country’s first satellite was named Asterix. When Goscinny died, one French obituary likened his passing to the collapse of the Eiffel Tower. Asterix in Belgium is the last book in the series that Goscinny wrote. It is said that Uderzo took over his friend’s job with much hesitation. The Asterix comic series went on to outsell Voltaire, Flaubert, Hugo and every other French author before. The books created an international record – more than 380 million Asterix books sold in more than 100 languages worldwide.

The story of Uderzo’s own name seems to be lifted from the Asterix series. His father Silvio Uderzo, an Italian immigrant who moved to France, wanted to name him Albert. It was registered as Alberto because the government official misunderstood Silvio’s heavy Italian accent. Uderzo said in an interview, “I once asked my father: Why did you give me an Italian first name, considering we live in France? His reply was typical of him: "I didn't try to register you as Alberto, but instead as Alberto." It was hopeless. Without noticing it, my father pronounced 'Albert' the Italian way.”

Albert or Alberto, the cartoon character that this man co-created, became a mainstay of French culture for more than six decades. After debuting in the French satirical magazine Pilote, Asterix spawned dozens of books as well as animated movies, radio and television shows. Uderzo would have turned 93 a month from now – on April 25. French writers have admitted that Uderzo, the son of Italian immigrants who lived in France, helped the nation rediscover her proud ancient roots.

Also read: Comics are not children's books. Why outrage over Comic Con handing out 'Saga' to children?