Why did Atif Aslam walk out of Islamabad Taste Plus concert?

Do you love a good concert? Concerts are fun; you can see your favourite singer live, groove with the crowd, feel the vibe and feel connected.

Of course, concert-lovers have to put up with the ringing in the ears, burning eyes, the sweat of 1,00,000 others, people stepping on each other’s feet all the time, and pushing and pulling around the crowd giving and taking a bitch stare. Oh, and now there's Covid too. It’s more or less a game of survival of the fittest in open ground concerts.

It’s all worth it for the adored artist, right? But where do you draw the line? Where do you say this is a shit show and a criminal act by the event management and the artist too?

When people die? When someone is sexually harassed?

Pakistani playback singer Atif Aslam walked out of the Islamabad Taste Plus concert midway on December 10.

The alleged reason: Women and their families were being harassed by male audience members. In a video that went viral on social media, a woman is seen crying on the stage next to Aslam. The singer then confronts someone and exits the stage.

Someone misbehaved with a girl from crowd and she came to Atif Aslam and he left the concert ❤️. Respect?#AtifAslam #TastePlus pic.twitter.com/IioJyOGoJC

Those who attended the Islamabad Taste Plus event at Jinnah Convention Centre claimed on social media that the concert was badly organised, and had a bad, unmanaged crowd.

Pathetically organized Taste Plus festival in Islamabad. Advising people to not attend the rest of it because faida hi nae hai. Is no place safe anymore? Atif left midway cuz he couldn’t tolerate how the crowd was behaving.

An unverified Instagram conversation with the Pakistani playback singer quoted him as saying, “Don’t be sorry. I love Islamabad. At least we saved the families from any mishap by stopping the event.”

Dm'ed #AtifAslam regarding the Taste Plus event and this is what he replied. ?❤️ pic.twitter.com/SW0uEQDQkH

Some even claimed that the crowd was throwing bottles at Atif Aslam, forcing him to leave.

Atif aslam actually left the concert just after 5 mins bcos of the guys who were hitting him with bottles but not only that they were also slapping and punching the girls in the crowd like wtf man.

This is not the first time that Atif Aslam stood up against harassment at his concerts. In 2017, he called out a few male audience members for harassing a woman in the audience.

Netizens are applauding the singer’s stance, for not putting up with the management or the raucous audience.

If Atif Aslam actually left because people were being ill mannered then I'm proud of him. We really need to deprive people of fun until they learn how to behave. High time everyone expresses their disgust over bad behaviours. Its not cool at all. Big respect and adore.

OVER 90% OF WOMEN REPORTED SEXUAL HARASSMENT AT CONCERTS IN US 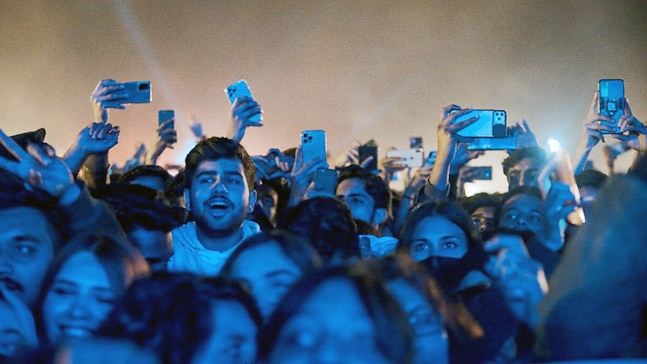 The incident at the Pakistani concert is not limited by geography. A 2018 survey by non-profit OurMusicMyBody found that 92% of concert-going women said they went through some sort of sexual harassment or misconduct at a concert.

55% reported being groped, and 3% reported sexual assault. A female reporter for TeenVogue wrote that she was groped 22 times in 10 hours at the Coachella festival in 2018.

At the 2015 Coachella festival, a photo of a man wearing a T-shirt that read ‘Eat Rape Sleep Repeat’ went viral. In India, just last year, girl students at Delhi’s Gargi College reported mass harassment during a college festival and even protested against the college management for their bad management.

It’s not just sexual harassment that plagues these massive concerts. The Astroworld tragedy is still fresh in memory.

Crowd mismanagement has led to fatal stampedes. 11 people were killed at the Astroworld concert and scores other injured when a stampede broke out. Travis Scott, who was performing at the concert, went on to deny any responsibility, despite having been the creator of the event.

Props to travis for doing this. You can’t tell me this isn’t genuine. pic.twitter.com/soHJQYmEWN

Travis Scott was removed from the Coachella 2022 line-up following the controversy. But this festival itself has some skeletons in the closet.

The 1989 Hillsborough Stadium stampede in the UK is perhaps the most horrifying mass event that went wrong. Over 90 people were killed in the human crush and hundreds of others were injured.

Then, there are the gruesome fire incidents at concerts. The 2003 Station nightclub fire in the US killed nearly 100 people. Fireworks are a common scene at concerts. And a small glitch can result in a trapped human fireball.

It is high time that event managers and artists are held responsible for the safety at concerts. It is also the duty of artists and their companies to perform and endorse events which demand safety of their fans. Another recent concert that is facing the heat even as I write this, is singer AP Dhillon's December 10 Mumbai concert. An FIR was filed against the organisers of the concert for flouting Covid protocol.

Across the border in Islamabad, Atif Aslam did walk out of an unruly concert, demanding better from event management companies, but it is also a fact that the 3-day event went on despite the complaints.