The silence of Aung San Suu Kyi - Why has Myanmar's leader not been stripped of her Nobel Peace Prize yet?

Aung San refuses to condemn terrible crimes against the Rohingyas, reported now by the UN. Yet, the Peace Prize stays put. The only reason the Peace Prize Committee gives for this is — ‘We just don’t do it’.

Since last August, Myanmar’s military has launched a violent campaign against the Muslim Rohingya community living in the Rakhine area of the country, whom it says are “militants and illegal immigrants”.

For 12 months, the Rohingya have been killed, tortured, raped, their homes and rice fields burnt. They have fled their homes only to end up as refugees in neighbouring countries, which don’t know what to do with them. India alone has over 14,000 registered Rohingya refugees. Thousands of Rohingya have been killed, and lakhs forced to live as refugees. (Photo: PTI)

For the entire period, the country has been headed by a woman once heralded as a champion of democracy and non-violence, a recipient of the Nobel Peace Prize.

Who has done little to control the violence, or even condemn it.

Aung San Suu Kyi, in fact, has taken the side of the Army, and claimed that the reports of the violence are overblown and inaccurate.

However, as her reputation is torn to shreds and the international community demands answers, the strongest endorsement of her ‘non-violence champion’ credentials — the Nobel Peace Prize — remains steadfastly stuck.

The Norwegian Nobel Committee has made it clear that Suu Kyi will not be stripped of the honour. Their reason for this — they “just don’t do it”.

Let’s put this in perspective: Suu Kyi heads a government whose military has been accused of “genocide” by the UN, the most serious crime a state can be accused of, and a term the body uses very selectively.

On August 27, a UN report was released on the Rohingya violence, indicting by name six senior military leaders who it says should face trials. Mentioning leaders by name is again something the UN does not usually do — it was not done even in the case of Syria. The UN has accused the Myanmar Army of 'genocide', a term it uses very rarely. (Photo: AP)

The report does not spare Suu Kyi either— “through their acts and omissions”, the report says, “the civilian authorities have contributed to the commission of atrocity crimes”, and that Suu Kyi, “has not used her de facto position as Head of Government, nor her moral authority, to stem or prevent the unfolding events in Rakhine”.

Can such a head of state still be called a Nobel Peace Prize laureate? The Peace Prize is awarded to people who have “done the most or the best work for fraternity between nations, for the abolition or reduction of standing armies and for the holding and promotion of peace congresses”.

Suu Kyi, since the Rohingya conflict worsened, seems to have done the exact opposite. Suu Kyi does not have control over the Army. But she does have moral authority and popularity. (Photo: Reuters)

Does not the continued association of the prize with her name sully the values the prize stands for?

Admittedly, Suu Kyi does not have much power over her country’s Army. Her official title is ‘state counsellor’, and she shares power with the military.

What she does have is immense moral authority and popularity. Her failure to condemn — in fact, her subtle endorsement — of the violence has given it the kind of legitimacy an Army campaign alone could never have enjoyed.

And what is the Nobel Peace Prize committee’s reason for not stripping her of the honour?

Olav Njoelstad, the secretary of the Norwegian Nobel Committee, said on the day the UN report came out that the rules regulating the prizes did not allow for a prize to be withdrawn.

The Guardian  quoted him as saying: “It’s important to remember that a Nobel prize, whether in physics, literature or peace, is awarded for some prize-worthy effort or achievement of the past. Aung San Suu Kyi won the Nobel peace prize for her fight for democracy and freedom up until 1991, the year she was awarded the prize.”

Does it mean that peace prize winners are then free to do whatever they want, no questions asked?

The committee seems to think exactly that.

When similar demands against Suu Kyi were raised last year, the-then committee chief, Berit Reiss-Andersen, had said: “We don’t do it. It’s not our task to oversee or censor what a laureate does after the prize has been won. The prizewinners themselves have to safeguard their own reputations.”

But when a prize winner acts in a way that is antithetical to everything the prize stands for, does not the committee have a responsibility to at least condemn them?

Again, the committee seems to think not.

Last year, The New York Times  had quoted Gunnar Stalsett, who was a deputy member of the committee in 1991, the year Suu Kyi received her award, as saying: “A peace prize has never been revoked and the committee does not issue condemnations or censure laureates. The principle we follow is the decision is not a declaration of a saint. When the decision has been made and the award has been given, that ends the responsibility of the committee.”

If this is the stand of the most reputable body recognising and honouring peace efforts across the world, it puts a serious question on the credibility of their choices. 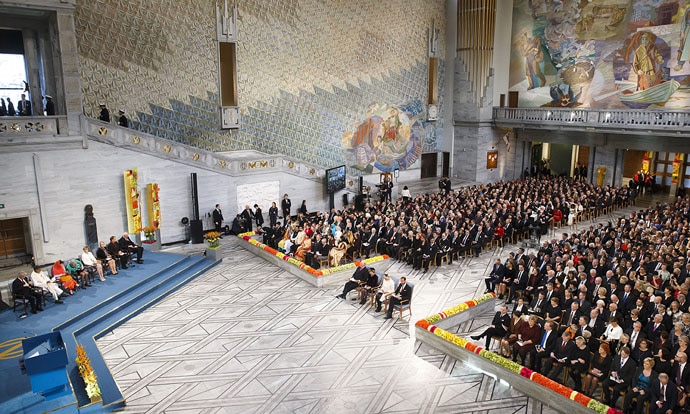 The hallowed Nobel Peace Prize committee needs to do more to live up to its glittering reputation. (Photo: AP)

The only reason the Nobel Peace Prize Committee is not stripping Suu Kyi of the honour is that it is not stated in their rules. But what is stopping them from changing the rules?

This is not the first time that questions have been raised on Nobel Peace Prize winners. But as the liberal world order, established post World War II, experiences possibly its worst-ever strains and violence rises across the world, international bodies, especially those that seek to stand for justice and equal rights, need to re-assert and re-affirm their credibility.

The world has changed, and the Nobel Peace Prize Committee needs to keep pace. As the Rohnigya crisis shows no sign of reaching a solution and Suu Kyi continues to head a civilian government that is indifferent at the least and complicit at the worst, the path before the Peace Prize Committee is clear. No prizes for guessing what.