Avni was perhaps not a habitual man-eater. A bunch of inept people could not understand this

Attempts to look for the cubs after Avni's death reveal how shoddy the operation was.

Media has erupted into a vociferous discussion on whether Avni, the maneater of Yavatmal, absolutely had to be shot dead or there was another way.

On one hand, villagers were too scared to continue their regular farming activities and, therefore, deserved to be protected. DNA tests established that the tigress was linked to the deaths of the villagers in question. It was never confirmed whether Avni was a habitual man-eater. (Photo: Facebook)

On the other, she had not attacked any human being in the past three and a half months.

So was she a habitual man-eater? Or, did she seek human prey for a short period only?

It appears that the tigress could not venture far from her cubs, because she had to breastfeed them and it is at this time that a tigress is the most reactive.

Consequently, this might have compelled her to turn to attack humans, although they were not part of its regular prey.

Naturally, she also required immediate nourishment for herself. This could be the reason why the tigress had killed a few villagers, as that area has low prey base.

Once those compulsions were over, she returned to hunting animals as before. A confirmed man-eater would not suddenly have stopped killing the villagers and would have entered villages and shown its presence near humans, which in this case did not happen.

The circumstances also suggest that the decision to kill the tiger was made beforehand, and the claim that she was killed in self-defence does not hold water. A tigress is the most reactive during breastfeeding her cubs. (Representative image: Reuters)

The shooter, given the task, was traveling on top of a jeep, and experienced forest officers know that no tiger would attack a jeep.

Likewise, the statement that attempts were made to use darts in the dark is technically incorrect, as according to protocols, darting has to be done in the daytime.

Further, no effort was made to track the tiger cubs before the mother tigress was killed.

A bid to track the cubs afterwards reveals an astonishing lack of experience in tracking animals, because if the cubs are not located very quickly, they will starve to death for no fault of their own!

Besides, the shooter was armed with a 458-magnum rifle that carries a heavy slug, with which he had to shoot at a close range.

This rifle is not accurate at a distance. The brief was “shoot to kill.” It is hard for cubs to survive without the mother in the wild. (Representative image: Reuters)

Senior government officers should have thought of other alternatives, which the shooter armed with this heavy weapon could not.

The animal should have been localised within a few days after the last human death by tying baits.

Why was the tigress not localised?  Why were there so many jeeps and men moving around, throwing stones and bursting crackers?

The first thing is to isolate the area so that the tigress can move freely and take its natural prey, which is substituted by giving a young buffalo. 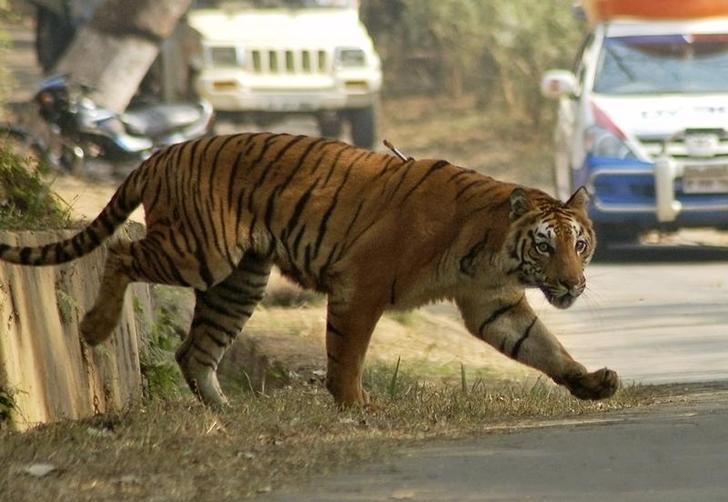 Was Avni transquilised after being shot? There are so many unanswered questions. ( Representative photo: Reuters)

Once the tigress takes the bait, all you have to do is tie another one so the tiger remains well-fed and consequently so do the cubs. Even after taking the baits if the tiger attempts killing humans, then it can be confirmed that it is a man-eater.

In Avni’s case, no such analysis appears to have been done.

I have developed a technique that I found very effective, though it requires courage to implement.

I feed a tiger till it settles down and then surround it with a chain-link fence. You need trained staff as they have to get close to the tiger. The tiger’s attempt to attack is prevented by blocking the tiger with 3-4 elephants standing as close to it as it would allow.

The chain-link is kept towards the tiger so that even if the tiger attacks, it would be unable to bite or claw anyone. I have trained staff and range officers who have actually done it. Once the chain-link is enclosed, the fencing has to be doubled to avoid the tiger jumping out.

When enclosed, the bait can be removed with the help of the elephant, and the tiger can be tranquilised easily. In this case, the enclosure that I have explained above could be used to keep the entire family and wait for the decision of the NTCA (National Tiger Conservation Authority) regarding what to do with the man-eater. The time has come to develop a core team within the department to deal with such cases.

On no account can a police officer or an Army man deal with this, as it requires out-of-the-box thinking that only a person who has spent hours tracking animals can do.

Tracking requires knowledge of animal behaviour and a consequent development of a sixth sense, which actually stems from knowing the terrain and the ways of the wild.

This is evident in old shikaris (hunters) when they were employed, when blocks were permitted to hunt.

Besides this, forest staff outside the core areas need to be trained on how to deal with such an animal and how to generate trust among the locals, once such an incident takes place so that there is no reaction that can damage the animal and other wildlife.

This is now important as evident from the Dudhwa incident.

Also Read: We could not save Avni. Can we now save her cubs, please?

Post your comment
#Yavatmal, #Wildlife, #Man-animal conflict, #Avni
The views and opinions expressed in this article are those of the authors and do not necessarily reflect the official policy or position of DailyO.in or the India Today Group. The writers are solely responsible for any claims arising out of the contents of this article.

A 1984-batch Indian Forest Service officer in Madhya Pradesh. He is presently the principal chief conservator of forest.