India's govt not only believes in homeopathy, it spends money on it

From snake charmers, we have officially progressed to placebo peddlers.

Homeopathy is growing by leaps. We have a ministry for AYUSH that, along with traditional medicine systems like Ayurveda and Unani, promotes homeopathy as a genuine medicine system. While there is now a consensus among the scientific community that homeopathy is nothing more than placebo, India continues to pursue the belief, officially as well.

The government keeps pretending homeopathy works while many government regulators like those in the US and Russia have mandated that the medicine must carry the warning that they do not work.

If you read the official announcement of the AYUSH’s latest move to justify spending money on homeopathy, you would think the ministry were doing something important. That’s the power of official language.

“Minister of State (Independent Charge) for AYUSH, Shri Shripad Yesso Naik will inaugurate the World Integrated Medicine Forum on Regulation of Homeopathic Medicinal Products: National and Global strategies in New Delhi  tomorrow. This is the first-of-its-kind forum considering the increased perception of the international world towards India as a key player in the progress of the homoeopathy drug industry, drug lawmakers, regulators, manufacturers and pharmacopeial experts from various regulatory authorities, eminent scientific organisations and pharmaceutical industries from 25 countries, are participating in the two days forum to strategise the  actionable aspects in the homoeopathic drug industry, which, in turn, will promote global harmonisation in the sector.” 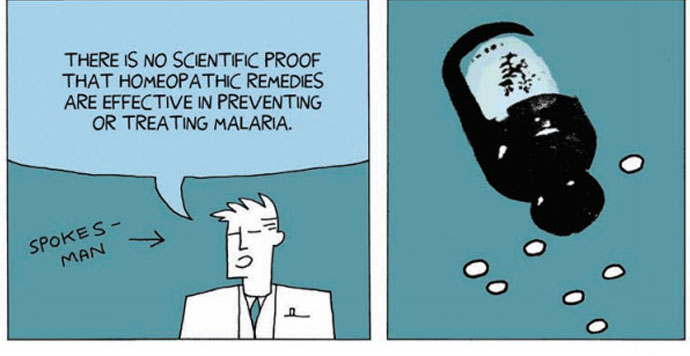 That’s breathtaking. It also contains the word scientific. But what should worry Indians is the part that says “increased perception of the international world towards India as a key player in the progress of homeopathy drug industry”. From snake charmers, we have progressed to placebo peddlers, while Prime Minister Narendra Modi almost convinced us that we were the mouse charmers.

"One of the highlights of the forum will be exchange of Memorandum of Understanding among Homoeopathic Pharmacopoeia Convention of the United States (HPCUS) and Indian bodies — Pharmacopoeia Commission for Indian Medicine & Homoeopathy (PCIM&H) and Central Council for Research in Homoeopathy (CCRH) on cooperation in the field of Homoeopathic Medicine. It is hoped that this agreement will be a benchmark for many more agreements to follow with the aim to develop and harmonise homoeopathic pharmacopoeias and to strengthen regulatory provisions for homoeopathy in the whole world.”

Do not bother understanding that. Just understand that the US homeopathy pharmacopoeia is looking at India as a market because the US FTC has forced them to declare on label that homeopathy does not work?

Since it’s the job of the Federal Drug Administration to ban a product, the Federal Trade Commission can only force them to make declarations. “It recognises that an OTC homeopathic drug claim that is not substantiated by competent and reliable scientific evidence might not be deceptive if the advertisement or label where it appears effectively communicates that: there is no scientific evidence that the product works…”

We are a billion-plus people. And we have homeopathic colleges. The graduates are doctors who would open clinics and the demand for homeopathic medicines will go up. That’s manna from heaven for US pharmacopoeia, right?

The participants will be engaged in conversation and discussions about homeopathy a serious topic because they believe they are doing a good thing. One cannot question their sincerity like one cannot question Telangana chief minister KCR’s sincerity when he offers jewellery worth Rs 5 crore to Tirupati temple. The problem is both KCR and Shripad Naik are spending public money on beliefs, benefits of which cannot be proven. Only felt by believers.

Homeopathy poses very little danger to users. Since the concoction that passes off as a medicine is actually nothing more than water, it has no effect, hence no side effects. Few people with serious ailments opt for homeopathy. But there’s always a chance that some who need real medicines may get it too late to help because they relied on homeopathy. One reason, there’s a demand in many countries to proscribe the system.

India is one of the few countries where homeopathy is not only recognised as a valid medicine system, but it is taught in universities. We have now graduates coming out in this stream. As the government announcement added: "Homoeopathy is one of the most followed medical systems in India and its strength lies in the fact that its medicines are gentle, safe as well as cost-effective. In the era of growing adverse drug reactions and auto-immune and lifestyle-related illnesses, Homeopathy has a crucial role to play in the well-being of mankind.”

Now, the real threat: The use of homoeopathy is steadily growing in India and as per an analysis by Ministry of AYUSH, this sector exhibited an annual growth rate of 26.3 per cent in the past year, the highest among the other AYUSH modalities.

Yes, homeopathy is growing faster than Ayurveda and Unani, two systems that are effective in many ways because they have medicines in their medicines. Neither of these make false promises and exaggerated claims. Except, homeopathy which has been tried on even cancer. And failed, of course. It works for many if you consider the testimonials as evidence. Just like Tirupati’s blessings work for KCR or a baba’s mumbo-jumbo works for his disciples.

Also read: Homeopathy is dangerous, it can kill you. You're stupid to follow it

Post your comment
#Medical science, #Placebo, #Homeopathy
The views and opinions expressed in this article are those of the authors and do not necessarily reflect the official policy or position of DailyO.in or the India Today Group. The writers are solely responsible for any claims arising out of the contents of this article.