The battle also paved the way in moulding the present-day Indian Army.

Indians have had an important role to play in West Asia. This is not a recent occurrence; rather, it has been the case since millennia. Unfortunately this significant part of history has been long forgotten. One major event, related to our military exploits, is the Battle of Haifa during World War I, where only 400 brave Indian men defeated 1,500 officers, troopers and their artillery. It sealed the fate of the Ottoman Empire and led to its demise.

For Indians, the Battle of Haifa is of particular significance, as it was fought by the cavalry of the Indian princely states which were commanded by Indian officers. All other units had only British officers. The charge was led by the Jodhpur Lancers and supported by the Mysore Lancers, and contingents of Bhavanagar, Baroda, Idar and Jamnagar state forces.

September 23, 2017, marks the beginning of the centennial anniversary of the Battle of Haifa, when exactly a hundred years ago, 400 Indian soldiers charged the fortified town of Haifa and Mount Carmel. They took 1,500 Turkish, German and Austrian prisoners captive at the point of their lances and swords; the opponents were armed with modern weapons. This feat of arms and display of courage remain unmatched in the annals of warfare. At the time, the contribution of the Indian officers and troops was acknowledged by one and all, including the House of Lords. This is clear from the proceedings of the House of Lords. 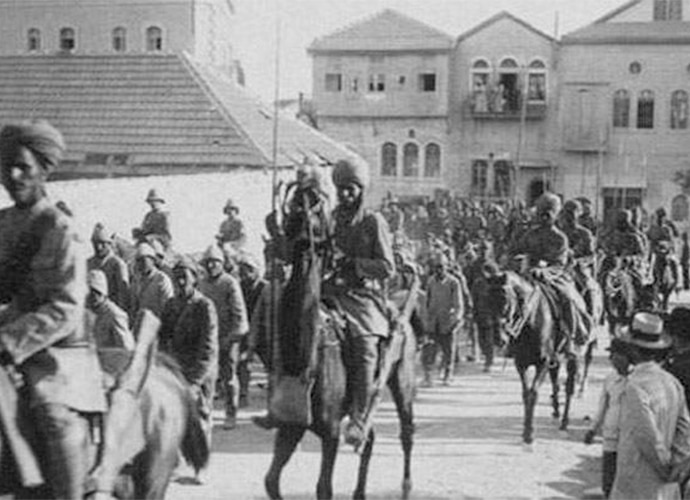 The seventh Earl of Mayo said on May 21, 1919: “My Lords, there were two divisions of Indian cavalry employed in Palestine including an Imperial Service brigade. I believe I am right in saying that they were all Indian. It is well-known to the authorities at the War Office and to the military authorities that these brigades did very good work indeed. They had tremendously hard work to do, so hard indeed that they were the first troops to go into Damascus... What I should like to ask is why the Indian cavalry did not get sufficient credit for what they had done. They fought the Turk and they beat the Turk.”

A noteworthy aspect of the battle is the Abdu’l-Bahá connection. The Bahá’í faith has its origins in northern Iran, on the banks of the Caspian Sea. At the time of the Turkish revolution, the Turks felt that Abdu’l-Bahá was not supportive of them. Therefore, they took him captive and sentenced him to death. On hearing from the British intelligence that Abdu’l-Bahá was supportive to British allies, Arthur Balfour, who was foreign secretary then, ordered the troops to rescue him. The nearest troops then were the Jodhpur and Mysore Lancers who stormed Haifa on September 23, 1918, at 2 pm to capture Abdu’l-Bahá.

It is striking to note that the battle also paved the way in moulding the present-day Indian Army. Right since the time of the British, there have been three types of armies: British troops; British Indian Army, in which the officers were British and the troops were Indian; and, armies of the princely states. The armies of the princely states each had one or two British officers as advisors. During the 1899 Boxer Rebellion, the Indian troops (as part of the British Indian Army) were rubbing shoulders with the armies of Russia, France, Germany and America. Their performance in the battle was noticed. Two regiments from the princely states that took part were Jodhpur Lancers and Bikaner Ganga Risala.

The result of the participation of the Indian troops was the setting up of an institute called the Imperial Cadet Core, in 1903. The main objective of the institute was to train Indian troops so that they could become officers. In a matter of 10 years, the British killed the institution as they realised how good the Indian officers could be.

It was soon after the Battle of Haifa that Lt-Gen Maharaja Sir Pratap Singh led efforts to establish the Prince of Wales Royal Military College in 1922, in the same premises of the Imperial Cadet Core which had been shut down by the British in 1914. The institution is today called the Rashtriya Indian Military College, a necessary stepping stone for commission in the Indian Army. The college has seen several distinguished alumnus, one among them being KS Thimayya, who served as the Chief of Army Staff between 1957 and 1961. Subsequently the Indian Military Academy was also set up in 1933.

On the eve of India’s independence, the Indian Army was one million strong. Field Marshal Lord Wavell, the then Viceroy of India, wrote to Clement Atlee, the then British Prime Minister, that the Indians in the British Indian Army had strongly identified with the fight for India’s independence. Thus the time was ripe for the British to leave India. “Britishers realised they can’t rule India without the army and the army was clearly not with them,” says Major General Dhruv Katoch, editor of the Salute magazine and secretary general of the Indian War Veterans Association.

One finds similar sentiments in the book, Thimayya of India, by Humphrey Evans. In the 1920s, soon after being commissioned as an officer from the Prince of Wales Royal Military College, Gen KS Thimayya, along with a few other officers, met Mahatma Gandhi expressing their interest to join the freedom movement. But Gandhi advised them to continue serving the Army as their services would be most required there. It’s sad that such a battle which has contributed in so many significant ways remains a lesser known fragment of history.

Post your comment
#Ottoman empire, #Indian Army, #British Raj, #Battle of Haifa
The views and opinions expressed in this article are those of the authors and do not necessarily reflect the official policy or position of DailyO.in or the India Today Group. The writers are solely responsible for any claims arising out of the contents of this article.