What I discovered filming penguins in Antarctic's icy wilderness

The aim is to find how climate change, fishing, pollution are affecting the peninsula's penguins.

After sailing for two days on a nauseatingly rolling Southern Ocean, arriving in crystal clear, calm Antarctic waters feels like waking from a long, uncomfortable sleep.

For cameraman Dave Cheeseman and me, arriving in this stunning icy wilderness was also the culmination of months of planning - the beginning of six-days' filming that would bring us close to Antarctica's wildlife.

We were there to follow the work of Oxford University zoologist Dr Tom Hart. I met Tom in 2012 at London Zoo's Institute of Zoology. I was on the hunt for stories, and when Tom told me about his unusual penguin conservation project, I was fascinated.

Tom has set up Antarctic CCTV - a network of cameras in penguin colonies on the frozen Antarctic coasts. He's now monitoring more sites - year-round, 24/7 - than have ever been monitored before in this large, rapidly warming area.

The aim is to find how threats including climate change, fishing, pollution and disease are affecting the Antarctic Peninsula's penguins.

Tom and colleagues have already found a link between climate change and declines in two penguin species on the peninsula. In recent years, concern has also been building among experts about the impact of fishing. Antarctica might look untouched, but there is an active fishery harvesting krill - tiny shrimp-like creatures that are used to feed farmed fish and to satisfy demand for Omega-3 fish oils.

Krill, though, is a foundation of the Antarctic food chain, so the fishery is taking food that penguins and other Antarctic wildlife rely on.

Tom's remote cameras capture hourly images inside penguin colonies, recording the birds as their environment changes. As well as a visual barometer of this change, they're also a year-round window onto Earth's greatest wilderness - an irresistible story.

BBC World News' current affairs series, Our World, approached me two years later. So, in late January of this year, there we finally were.

Tom warned though that sunshine can lull you into a false sense of security here. Before we went ashore to the first penguin colony, he and his colleague Hila Levy ran through a checklist of survival kit, including a bivvy bag in case we got stranded.

Tom and Hila operate from a tourist cruise ship - it's an ongoing partnership with an American tour company, meaning that each season the researchers essentially hitch a lift to Antarctica. During our trip, the company's expedition guides ferried us ashore each day in a small rubber boat.

As well as safety gear, we had cameras and other kit in our waterproof backpacks, which, before we left the ship, had to be vacuumed out. We also washed our boots in disinfectant on every departure - biosecurity measures to avoid bringing anything onto the pristine continent that might cause damage.

The first Gentoo penguin colony we visited was a walk from shore, up to elevated, ice-free rocks that are ideal for nesting. As well as filming Tom and Hila as they retrieved images from their camera and gathered other data, we spent an hour lying low and filming the birds. 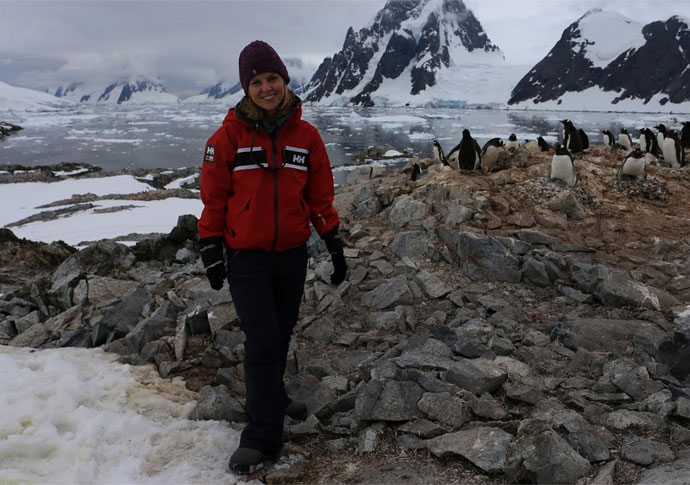 The next site we visited required a hike in snow shoes to reach a colony where all three species of penguins that inhabit the peninsula - Gentoos, adelies and chinstraps - nest together.

Here, Hila had to get much closer to the penguins. As well as helping set up and service the cameras, she is carrying out disease research, requiring swabs from a few of the penguins.

Over the following few days, we visited ten colonies. For this film, which you can see on BBC World News this Friday, we captured the early stages of an ambitious long-term monitoring project.

And the cameras left behind remain on the freezing wilderness as the winter draws in, watching over Antarctica when no one else is there to witness it. I'm looking forward to seeing what else they discover.

(Our World -The Penguin Watchers with Victoria Gillon is scheduled on BBC World News on Saturday, April 9 at 5pm, 10pm and Sunday, April 10 at 10am, 11pm.)

#Pollution, #‎Conservation, #Climate change, #Wildlife
The views and opinions expressed in this article are those of the authors and do not necessarily reflect the official policy or position of DailyO.in or the India Today Group. The writers are solely responsible for any claims arising out of the contents of this article.

The writer is a science reporter and video journalist with BBC News.