The art and science of eternal confidence

Successful people are often perceived as confident but it is less acknowledged that it is immense confidence that makes people successful. An exclusive excerpt from Bedazzle by Shamoly Khera.

Shamoly Khera's Bedazzle deconstructs the core aspects of subconscious motivation in all scenarios and handpicks the triggers to understand confidence on a deeper level so that anyone can use it to their best advantage. Successful people are often perceived as confident but it is less acknowledged that it is immense confidence that makes people successful.

Author Shamoly Khera reveals multiple action plans that can aid a person in developing and maintaining consistent confidence, awakening deep motivation in the self and actualising one’s full self-potential.

We present an excerpt from the chapter titled Dress Like It Matters. 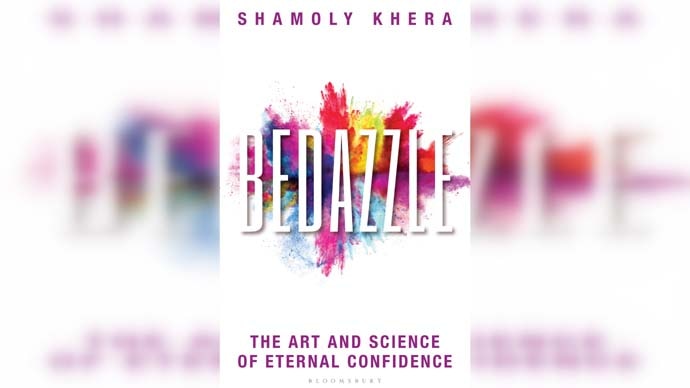 By now, I think most of you are pretty aware of how I was an awkward kid and an even more awkward teenager. I didn’t quite know what to do with my body. For example, I found my hands extremely annoying and attracting unwanted attention, when all I wanted to do was be invisible and focus on my work. I was just plain awkward. More than that, my childhood pictures are a volley of embarrassment, something that is neatly tucked away in the darkness of a long-forgotten suitcase, lest my husband finds it and discovers my dark awkward past and reconsiders his decision of choosing me as his life partner!

Exaggerations aside, my dressing sense was quite a disaster. Not that I gave it much importance, because I did believe that what I wrote in my exam papers mattered more than what I wore. And I believed it for the longest time. I did not like spending money, time or even a thought on my clothes, I was someone who would rather buy books. Growing up, I grew conscious of how I looked (like every teenager does at some point) and how good clothes made me feel—they actually made me feel good about myself, even on a bad or average day. I also remember feeling awkward when I spotted someone better dressed than me. The old, nerdy me, who would ignorantly strut in her colourful retro leggings and long shirts in a desperate attempt to cover her butts, would feel uncomfortable when a well- dressed person walked in, irrespective of how good or bad their IQ was. My confidence would take a beating and I realised that I didn’t like that. Even if I was smart in my head, I wanted to ensure that I looked impressive. This whole compartmentalisation of ‘this or that’ was now looking quite silly to me. Why did it bother me so much if someone better dressed walked into the room, especially when I had put in absolutely no effort and turned up underdressed?

Because the truth is, it matters.

This is why first impressions matter.

Thin Slicing: How We Dress up

We briefly discussed the concept of thin-slicing in the previous chapter. Let’s understand it a little bit more in the context of how people judge us by the way we look and dress up.

Thin slicing refers to observing a small section of an interaction, usually for less than five minutes and accurately draw conclusions about the emotions and attitudes of other people, based on their appearance and body language. While non-verbal communication and body language form a major part of our ‘bedazzling’ science (as discussed in the previous chapter), how you dress up is an essential part of creating the right first impression about yourself in someone else ’s mind!

Researchers have found that we make decisions about other people within seconds to minutes of first seeing them. Making judgments about others based on our initial observations is certainly natural. In all likelihood, our inclination to make these snap judgments is rooted in our early evolutionary need to determine whether or not a stranger poses a threat.

It doesn’t take long for someone to form an opinion about you. In fact, research shows that it takes one tenth of a second. People tend to look at our appearance, body language and how we are dressed and subconsciously make an evaluation in an instant.

So, whether you’ve just started your small business or are looking to expand, it’s important to know how your personal brand is influenced by your clothing.

Now we are certainly not here to construct the workings of a style diva or a model, ready to sashay down the runway. The point is to dress up in a manner that makes you feel confident of who you are; that doesn’t undermine what your personality has to offer. If you believe you have intelligence and wit worth your weight, you have got to put some effort to let your appearance reflect that.

The brain is bound to draw comparisons when it notices you and someone else in the room, say multiple candidates who have come for an interview. We draw random conclusions in our head, and how one dresses up is certainly one of them. Again, the point is to wear something that will let you be you and not distract the viewer from your core personality. You shouldn’t be waiting to run home or be embarrassed to bump into someone at any point. Someone can be in casuals and be confident because maybe that’s who they are; while someone can be in a three-piece suit and be super awkward. You have got to find your fabric and rock it.

‘What you wear is how you present yourself to the world, especially today when human contacts are so quick. Fashion is instant language.’

I can recount many incidents that prove how turning up well-dressed mattered. But it is this particular incident that is still clear in my memory, even after nine years. As a presenter for UTV television channel, we were shooting for a show called Live My Life, produced by Red Chillies Production. Shooting this show was a big deal for everyone, for the amount of detailing and planning that went into it. I had an entourage of make-up, hair and wardrobe stylists, with a stylist assistant constantly with me, making sure I fully looked the part of the host—the narrator of the show, the connector between the fan and the superstar, the fan’s confidant and the superstar’s friend. We also put in a lot of effort to pick the right fan who would get to meet the superstar at the end of the show. The fan meeting the superstar was an emotional moment for everyone on the show—some fans were overjoyed, some were overwhelmed, some cried happy tears—because the reaction of the fan was unprecedented. We also put equal effort in picking the right look for me—to dress me up as fashionable as well as approachable, with outfits that were aspirational, yet those that would help me connect to millions of young viewers watching me. The time to reach the venue (Hotel Renaissance Mumbai Convention Centre, on most days) for the shoot was 7 am. Being an ex-medical graduate, I was used to waking up to early morning 4 am alarms. But, of course, I would arrive in my basics, without any make-up, hair mostly up in a bun, knowing very well that the team—the entourage—would doll me up just perfectly. I couldn’t forget this one particular thing that happened every morning during the shoots. Around 7 am when I would walk towards the hotel door, the security guard wouldn’t bother to open the door or seem to notice that I had arrived. Don’t judge me just yet, the reason I even noticed this as something out of the ordinary was because of what would happen when I would leave the hotel. Surprisingly, when I would walk towards the door after my shoot, the guards would scrum and hurry to open the doors, and this was when they would spot me from afar approaching the exit—it would be the same security guard who would greet me half-heartedly in the morning. The only difference during the entry and exit times was this—I was more groomed, dressed, kempt and ‘cleaned up’. Clearly, the styling of this glamorous, fashionable and approachable girl was working—in a manner that was influencing people around her to act differently! Of course, I was the same person underneath, except that the perception my look created at both times differed. And it changed the way people around me reacted, greeted me. I might have been more tired and grumpy sometimes after the shoot, but I didn’t look like it— gliding in my heels that added just the right amount of perceived confidence. It was not just the guard at the exit who seemed to react this way. The next couple of days, I kind of conducted a mini-experiment around this and started to note if other staff also behaved differently before and after my ‘makeover’. And they did! The hotel staff would receive me more fervently after my makeover, smile more warmly and really greet me like I might be someone of importance because I was dressed for that. Clearly, after the entourage’s magic, I felt noticed; I felt seen. It was weird at so many levels because I wasn’t trying any harder once I was ready. But I certainly seemed more confident.

Now, I am not asking you to get an entourage of your own. Nor do I have one on a daily basis when I am not shooting. But I have taken notes from my shoot days and ensured that I have a good number of impressionable outfits and some knowledge of good make-up and hairstyling. It’s like a soft weapon that sharpens your personality.

I am sure you have experienced something similar when you put in efforts to up your looks game and may have noticed a difference in the way people react to you. The point here is to not go all out, becoming a ‘style addict’, but you need to know your ‘one classic look’, your ‘go-to’ look that is essentially you and makes you feel ready to take on the world. For example, when I am supposed to be performing on stage, hosting a show or have to make a public appearance, I make sure I put on heeled shoes, not necessarily super-high heels but just enough to add height to my appearance that makes me feel taller and confident. Though it is true that heels do change the way you walk and conduct yourself, and I love it! With multiple experiments, I have figured out that A-line dresses tend to flatter my build and have a more glamourous appeal, so I keep them for shoot days. For days when I am to teach as a coach, I generally pick a pantsuit, or a polo neck with high-waist pants, as they let me walk around more comfortably while projecting an image of authority. With repeated trials, I have figured out which outfit goes with which of my moods, perceptions and desired outcomes.

And this is what you have to do in the coming weeks. Be aware of occasions that are approaching and plan your look well in advance. What is the message you want to put across with your appearance? Pick your outfits accordingly.

Also Read: The young Indian male is trying too hard to look like an idiot

#Grooming, #Bedazzle, #Bookexcerpt
The views and opinions expressed in this article are those of the authors and do not necessarily reflect the official policy or position of DailyO.in or the India Today Group. The writers are solely responsible for any claims arising out of the contents of this article.

The author is an international TV presenter and confidence coach