Netanyahu and Modi herald new age of India-Israel relations. But there’s a catch

After Ariel Sharon’s 2003 visit, Benjamin Netanyahu is the first Israeli prime minister to visit India on an official tour as extended as his current one, all thanks to Prime Minister Narendra Modi, who was the first Indian PM to visit Israel officially. As they make international and national headlines and turn heads with their very palpable bonhomie, almost everyone agrees that a “new dawn” of India-Israel relations has indeed arrived.

Netanyahu is on a six-day official visit with a 130-member business delegation, making all the pit-stops at important and strategic sites of mutual interest. While he called PM Modi a “revolutionary”, the inter-governmental deals on anti-tank missiles, cyber-security, renewable energies, water desalination technologies that are in the pipeline, are certainly of shared bilateral interest.

With India being Israel’s biggest defence export destination, and Israel being India’s third-biggest source of arms, this relationship seems more poised than ever for scaling fresh heights. 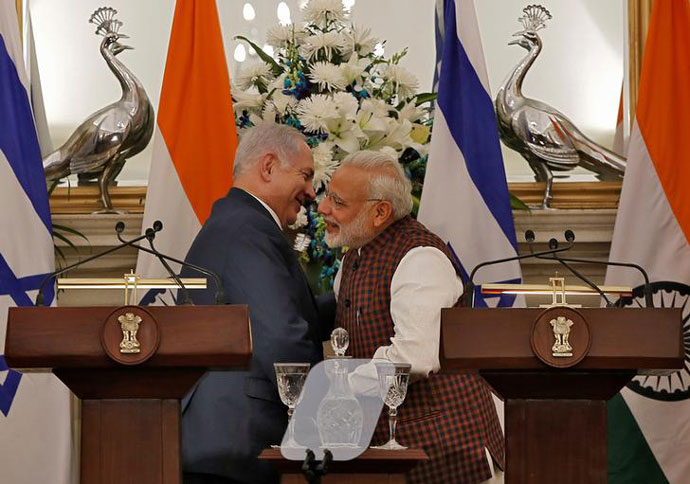 Of course, thorny issues, such as India voting against the US-driven agenda of declaring Jerusalem the capital of Israel at the United Nations, or the cancellation of the USD 500 million worth anti-tank Spike missile deal (which Netanyahu wants to revive), exist, in addition to the global politics of Israel-Palestine see-saw, but it seems both the prime ministers are interested in marching forward, despite these encumbrances.

Netanyahu has been welcomed with a warm hug from PM Modi, and a flurry of tweets from ministers and dignitaries of the two countries have followed, making the occasion rather appealing. Calling the visit “historic and special”, PM Modi escorted Netanyahu and his wife to the Teen Murti chowk, which has been renamed as Teen Murti Haifa Chowk.

Welcome to India, my friend PM @netanyahu! Your visit to India is historic and special. It will further cement the close friendship between our nations. @IsraeliPM #ShalomNamaste pic.twitter.com/sidgMmA1fu

In the presence of PM @netanyahu, paid tributes to the brave Indian soldiers who fought at Haifa. The spot where we commemorate their sacrifice will now be called Teen Murti - Haifa Chowk. pic.twitter.com/WmXdS6pE7F

From the ceremonial welcome for PM @netanyahu this morning. pic.twitter.com/aezmpx34cO

On his part, Netanyahu responded with equal eagerness, leaving a trail of tweets emphasising the importance of India-Israel ties, whether it’s about a linked ancient past or “resilient democracies”.

My first visit to India, a world power that is strengthening its relations with Israel. I am excited about this historic week that will further strengthen Israel's international standing. ???????????????? pic.twitter.com/0ptrXuabL2

Thank you to my good friend, Indian Prime Minister @narendramodi , who surprised me with a personal welcome at the airport upon my arrival in India. Together we will bring the relations between our countries to new heights! ???????????????? pic.twitter.com/bPZftC4caF

We are ushering today a new era in relations between Israel and India. We've had diplomatic relations for 25 years but something different is happening now because of your leadership, Prime Minister @narendramodi, and because of our partnership. pic.twitter.com/OLbcHHQCA7

Israel is a fountainhead of innovation. It's a global force of technology. India abounds with creativity, with ingenuity, with scientists, with mathematicians and I think that when we join our respective talents together we can achieve tremendous things for our people.

I called on Prime Minister Benjamin Netanyahu. Warm and engaging conversation on various aspects of our bilateral ties aimed at strengthening our strategic partnership. @IsraeliPM #ShalomNamastepic.twitter.com/dLqUYzzsmy

In his Sunday address, Netanyahu mentioned the 2008 Mumbai attacks, saying, “Indians and Israelis remember too well the savagery of the horrific terrorist attacks”, and is accompanied by Moshe Holtzberg, the Jewish boy who was saved by his Indian nanny Sandra Samuel during the terror attack on a Jewish centre, Chabad House.

While he played down the Indian vote in favour of the UN resolution opposing the US recognition of Jerusalem as Israel’s capital, saying “he’s disappointed”, but he doesn’t “think one vote affects the general trend”. The strategic cooperation that the two leaders envisage canvasses a large frame, from cyber-security, to missile defence, real-time intel sharing, etc.

Given that Israel is India’s third biggest arms exporter, after the United States and Russia, while India buys almost 40 per cent of Israeli defence equipment becoming the biggest buyer of Israeli arms, the defence cooperation couldn’t be more stressed. Bogged down as India is by cross-border terrorism emanating from Pakistan, and Israel’s continued claims of Palestinian freedom fighters are cross-border terrorists bombing Israeli settlers, the shared interest in combatting terrorism makes sense.

On Monday, PM Modi and PM Netanyahu chaired the India-Israel Business Summit, addressing an august gathering of delegates and entrepreneurs, while also taking a few questions. While Modi insisted that India is a huge market for Israeli entrepreneurs, asking Israeli defence companies to invest in India, Netanyahu acknowledged Indian innovation, diversity and vastness as having enormous potential for strategic cooperation along various axes.

Addressed a business summit with PM @netanyahu. Highlighted the potential as well as benefits of extensive economic cooperation between our nations. Sharing my speech on the occasion. https://t.co/CcFTOXlV00

I arrived in India with the biggest delegation of business leaders that has ever joined an Israeli PM on an official visit. The goal: to deepen the economic ties between India and Israel. Prime Minister @narendramodi, thank you for believing in Israel just as we believe in India. pic.twitter.com/dsizuIBtFC

While PM Modi stressed on facilitating the entry of capital and technology in most sectors like defence, where FDI has been allowed, he also said that “development agenda” presents a vast economic opportunity for Israeli companies. The shared “talent pool”, the research and development projects in cyber space security, data analytics, etc would soon turn India into an “innovation hub”, Modi hoped.

It is for this reason that PM Modi is taking his Israeli counterpart for a special visit to his home state Gujarat, saying he always had a “deep regard for the people of Israel”.

“In India, we have been taking steady steps over three years at both macro as well as micro-level, to make a difference. Our motto is: Reform, Perform and Transform. The India-Israel Innovation Bridge will act as a link between the Start-ups of the two sides. I have been saying that Indian Industries, start-ups and the academic institutions must collaborate with their Israeli counterparts to access the huge reservoir of knowledge,” PM Modi said.

India and Israel are increasingly being considered “natural allies” for the many shared interests, as well as for the increasing hold of the rightwing on the political horizon of both the countries. Both Netanyahu and Modi are riding the bandwagon of Hindutva and Zionism in their respective countries, presiding over an ultranationalism that sees global terrorism, particularly the Islamic terrorism, as a natural and shared enemy. While Israel has always courted India since the opening up of the channels in 1992, India is leaving its diplomatic dilemma behind to become more frank about its pro-Israel moves.

Yet, the peg in the pre-Modi era has been economy, and never politics. In fact, through the UPA era and before that during the reign of the NDA under Atal Bihari Vajpayee, Israel has been tended to as a potential source of technology and defence equipment, but a critical political distance was always maintained. However, the 2008 Mumbai attacks, and the “common scar” as it were, paved the way for greater cooperation, as also India’s increasingly reliance on the United States and the global politics dictated by American interests.

However, with Modi and Netanyahu at the helm, Palestine has become less a matter of principled politics, and more a balancing act. While India’s dependence on the Gulf countries as well as Iran for oil and natural gas cannot be stressed enough, the shift in balance, with Saudi Arabia and Israel forging a new bond, isolating Iran in West Asia, India is treading a new, unchartered territory of diplomatic ties, which is more “pragmatics”, and less “ideology”.

While members of the Left stage a protest against Netanyahu’s visit, the question of Palestine and the suffering of its people will not go away. Moreover, both Modi and Netanyahu are facing immense political resistance from the people of respective countries, with Netanyahu facing massive corruption charges, and Modi himself being criticised for significant economic and sociopolitical mayhem.

Hence, the “good optics” of India-Israel ties remains an interesting political straw both the leaders have latched on to, for survival and strengthening of positions in respective domains. This has as much to do with domestic politics, as it has to do with the international standing of two countries driven by unabashed militarist ambitions.