What Hindutva leaders were trying to achieve with Bhima Koregaon violence

When saffron forces seek to speak for all Hindus, they are drowning some voices, not integrating them.

The tensions simmering in Maharashtra for the past few days burst on to the national stage on Wednesday, after they reached Mumbai and disrupted “normal” life in the country's financial capital.

The violence, its coverage by the media, and the FIRs that have been registered in connection with it – against two far Right leaders, and Gujarat MLA Jignesh Mevani and Umar Khalid, a student leader and activist – are a telling commentary on how caste biases continue to keep our society in a stranglehold, and how future elections are likely to see more identity-based polarisation.

But most importantly, they expose the fault lines within Hindutva, showing that Hindutva's idea of Hindu dharma is to drown out other identities within it, not assimilate them. In seeking to establish themselves as spokespersons for all Hindus, the RSS and other saffron forces silence, not integrate, certain voices. Bahujans, for the saffron supremacists, will always be the "lower castes", unworthy of equality.

Who are the right wing leaders booked

Behind the cycle of disturbances going on in the state is an identitarian muddle – Marathas, Dalits and Brahmins, all have stakes here – with potential bearing on the state’s politics.

The two right wing leaders booked for the Bhima Koregaon violence are Sambhaji Bhide (85), known as Bhide Guruji, and Milind Ekbote (56). Both command considerable clout – Prime Minister Narendra Modi has publicly hailed Bhide, and Ekbote was a BJP corporator. Both have links with the RSS, and are known champions of uniquely saffron causes. They have criminal cases against them, which do not seem to have diminished their activities or their popularity.

A lot of their popularity has to do with being exemplary foot soldiers of the saffron ideology – Ekbote's groups have taken the lead in intercepting "cow smugglers" in the state, while Bhide has lent support to "worthy causes" such as opposing Tipu Sultan's birth anniversary celebrations, the Sunburn festival and the movie Padmavati.

He had been at the forefront of protests against Jodha Akbar, and had once organised protests when the police denied permission to a ganesh pandal depicting Maratha icon Shivaji killing Afzal Khan, a Muslim commander.

The Right has suitably rewarded those chiefly responsible for the Bhima Koregaon tensions - Bhide was, in 2014, hailed by PM Modi, who had said he had come to Sangli on "Guruji's orders".

While Ekbote's and Bhide's main adversaries have usually been Muslims, there is a history of targeting Dalits - in June this year, Bhide's Shiv Prathisthan had attacked devotees of Vitthal proceeding to Pandharpur.

Why would champions of a Virat Hindu cause turn against some within their own fold, when a united Hindu block ranged against the Muslim-Christian "other" seems to fall in perfectly with their vision of the world, and also benefits their political wing, the BJP, enormously?

In 2017, in Uttar Pradesh, the BJP won its stunning mandate because it managed to bring in Dalits into its Hindutva vote bank, in Gujarat, the community's alienation cost it dear.

The answer is simple - the RSS brand of Hindutva holds dear the concept of supremacy of Hinduism over other religions, and of upper castes within Hinduism. Anand Teltumbde, a civil rights activist who has been associated with the Committee for the Protection of Democratic Rights, Mumbai, has written: "Howsoever the Sangh Parivar may equivocate about it, Hindutva is nothing but a ploy of the upper caste elites to regain their racist supremacy."

It is not a coincidence that the fiercest in the recent spate of Dalit protests have been in BJP-ruled states, such as Gujarat and Uttar Pradesh.

What happened in Maharashtra

On Wednesday, the financial capital of the country was brought to a halt as railway and road traffic was affected. Across the state, buses were damaged and shops kept shutters down as Dalits gave a bandh call on Tuesday to protest against attacks on them on January 1. One person had been killed in that violence.

The bandh was called off by Prakash Ambedkar, Bharipa Bahujan Mahasangh leader and BR Ambedkar's grandson, by Wednesday evening. By the end of day, around 150 people had been booked.

At the heart of the protests is an annual event held to mark the victory of the lower caste Mahar battalion, which fought for the East India Company over the Peshwa army in 1818, at Bhima Koregaon. The rule of the Brahmin Peshwas was marked by extreme atrocities against lower castes, and the victory at the banks of the Bhima, which brought about the end of the Peshwai. 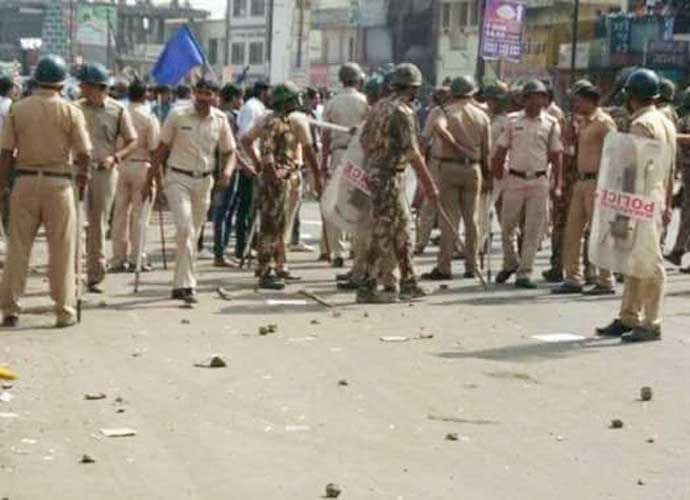 Several parts of Maharashtra were brought to a halt after the protesting Dalits called for a bandh. Photo: India Today

Dalits mark this event at Bhima Koregaon every year, but the 200th anniversary of the battle was special. While all permissions had been taken for the event, on January 1, Dalit groups proceeding towards the site were attacked by men waving saffron flags.

Many, including NCP chief Sharad Pawar, claimed the attacks had been premediated. The allegations gain credence because of an event three days ago, which took place some distance away from Bhima Koregaon.

In the village of Vadhu is the samadhi of a Mahar named Govind Gaikwad, credited with performing Shivaji's son Sambhajiraje Bhosale’s funeral. Sambhaji was killed by the Mughals, and nobody dared touch his body fearing it would invite their wrath. This Samadhi was desecrated on December 29.

The socially dominant caste of Marathas has often opposed the credit given to Gaikwad, and claimed that Shambhaji’s last rites were performed by the community. But according to a report, there is also a Brahmin angle to this – Sambhaji’s prime minister, Kavi Kalash, was a Brahmin, and some groups claim the legend of Gaikwad was amplified by those who did not want Kalash’s memorial getting pride of place beside Sambhaji’s.

It is unclear who desecrated Gaikwad’s Samadhi, and who attacked Dalits on January 1. What is known is that the crowds at Bhima Koregaon this year were expected to be larger because it was the 200th anniversary of the battle, and the government was aware of opposition to it – the Brahman Mahasangh, the descendants of the Peshwas, and even some BJP leaders had demanded that the event not be allowed.

The celebration had also become more high profile and political this year because of an Elgaar Parishad organised on December 31 to commemorate it. Mevani and Khalid had attended this event, giving a call to abolish the “new Peshwai” represented by the BJP, and were not present at Bhima Koregaon on January 1, though they have been booked for inciting violence.

Eyewitnesses at Bhima Koregaon said the attackers were brandishing saffron flags, and shouted slogans in the name of Ram and Bhavani.

Ekbote and Bhide have been booked on a complaint by a leader of the Bahujan Republican Socialist Party, who has claimed he has “seen that the accused (the two Hindutva leaders and their supporters) were doing all this… stones were being pelted and police were also being attacked.”

Both Ekbote and Bhide have denied involvement in the incidents.

After the tough fight the BJP had to recently face in Gujarat, voices emerging today suggest that the best way to counter the BJP's religious polarisation is through caste polarisation.

In Maharashtra too, the toughest challenge the Devendra Fadnavis government has faced recently has been from the formidable Maratha protests, who held silent, bit massive rallies across the state.

While one of their main demands was quota in jobs and education, the Maratha rallies also had anti-Dalit undertones to it - the other demands were justice to a Maratha girl raped and murdered in Kopardi by Dalit men, and dilution of the Atrocities Act.

The return of brahmins to the corridors of power - Fadnavis, Nitin Gadkari, Poonam Mahajan, among others - has also raised concerns in some quarters.

Dalits and Marathas coming together can become an invincible votebank, and hence many parties can have interests in dividing them.

However, a fractured Hindu vote does not seem to be the best news for the BJP. Why did the party not ensure better security at an event it knew was important to Dalit pride?

Or is it that some times, the saffron forces become too much even for a BJP government?

Maharashtra has a history of strong, violent Hindutva groups. The murders of both Left leader Govind Pansare and rationalist Narendra Dabholkar have been attributed to saffron bodies. If these groups are perceived as turning on Dalits, it can lead to severe tensions.

The very word "Dalit" carries the history of millennia of caste opression behind it. Dailt literally means opressed, and those opressing them were Hindu upper castes, who now run the RSS.

A police probe into the Bhima Koregaon violence will reveal who was responsible for the trigger that sparked Dalit anger. Till then, the message seems to be clear - for Hindutva groups, Dalits will always be the lesser among equals.

#Marathas, #Hindutva, #Dalits, #Bhima Koregaon
The views and opinions expressed in this article are those of the authors and do not necessarily reflect the official policy or position of DailyO.in or the India Today Group. The writers are solely responsible for any claims arising out of the contents of this article.