In the sanctimonious furore over Liam Neeson and Hardik Pandya, we have only exposed our bigotry

When was the last time you told someone that your ‘Madrasi’ neighbour should just stop frying fish? Wait, maybe they are Bengalis with all that mustard oil? Whoa, that unbearable stench! And those Punjabis at the end of the hallway and their taste in music! Who listens to that 'Sardarji music', anyway?

Of course, you have never uttered these disgusting words. In effect, you are so aghast that you want to now troll the curry-leaf chewing Malayali right out of the writing profession. It's beyond civility and social mores to say such terrible things out loud, right?

Yeah, I thought as much.

Now tell me that you have never actually wished that you could walk up to Mrs Mukherjee or Mrs Nair and tell her off for not using an industrial strength kitchen chimney to stop that fish from stinking up the surroundings? Or that moron son of Mr Gupta to sound-proof their home while twerking to 'Wajda Woofer Gaddivich' or whatever it is that he ‘viches’.

Ok, don’t answer that and incriminate yourself.

Let's just face it. We have all had our moments. It would be abnormal not to have a human reaction to something that really irks us.

Now think about what actor Liam Neeson said recently about thinking of beating up a black person because a friend told him that she had been raped by someone of colour. He was referring to a thought that had crossed his mind — forty years ago. 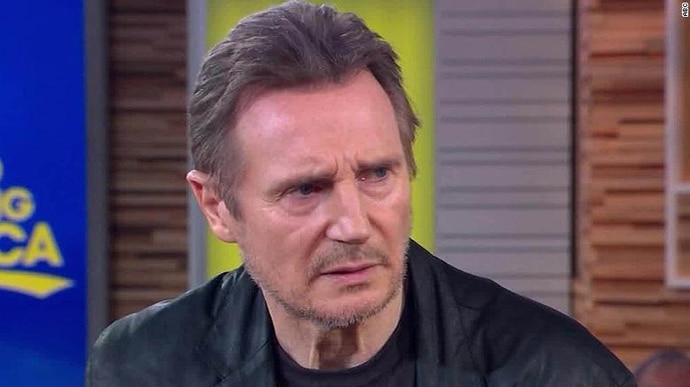 In the noise and chaos over his thoughts from 40 years ago, the point Liam Neeson was making has been completely lost. (Photo: Reuters)

The backlash to the Oscar nominee’s words (now being termed an admission to being racist) has been as brutal as his thoughts once were.

He is the new pariah of the celeb world.

Singer Lily Allen has dedicated her song, oddly titled, 'Fuck You' to Mr Neeson, which privilege, by the way, is usually reserved for Donald Trump, President of the United States (that, mind you, is fine by all of us — wonder how that is not prejudice?).

Further, Mr Neeson was un-invited from a red carpet event, and anyone who can find half a self-righteous voice in them has condemned and compared him to white supremacists, and more.

This will not be the last that Neeson will hear of it. There is bound to be at least an Oscar ban, and the man will rue the day he expressed his thoughts honestly in public.

Of course, in the noise of this chaos, the point that the actor was making has been completely lost.

Here I quote from the interview to the Independent where Neeson reportedly says,  “I come from a society — I grew up in Northern Ireland in the Troubles — and, you know, I knew a couple of guys that died on hunger strike, and I had acquaintances who were very caught up in the Troubles, and I understand that need for revenge, but it just leads to more revenge, to more killing and more killing, and Northern Ireland’s proof of that. All this stuff that’s happening in the world, the violence, is proof of that, you know. But that primal need, I understand.”

At the risk of being ridiculed, I admit, I do understand. I agree that sometimes all you want is to just say it as it is. But it is this intolerance that leads us to violence, which is not the answer to our base instinct that seeks harm or revenge.

But in this new world order, we must learn to sugarcoat our words, including our thoughts, so that we do not 'appear insensitive'. Take, for instance, the  brouhaha about cricketers Hardik Pandya and KL Rahul who talked about their experiences with women, relationships and dating on the Koffee with Karan TV chat show. Closer to home, Hardik Pandya and KL Rahul were socially pilloried for being candid and just saying what several men think. (Photo: Screengrab/Koffee with Karan)

Their words emerged as both wrong and very disrespectful to women. But for those words, the boys were for a while thrown out of the squad, filmmaker-host Karan Johar felt compelled to apologise, and the cricket board even considered banning all cricketers from appearing on TV shows.

How is that not intolerant? Do you really think that not saying what you think will actually make you a better person?

The very fact that public opinion dismembers every word we utter, forcing us to dissect every thought that crosses our mind, and then present the censored and censured version of it is proof of a world that is equally intolerant to anything that is different from the average.

Does that make a person acceptable?

The self-righteousness with which we judge everyone is doing anything but creating an equal place, or a better space.

At best, we are becoming better actors.

And maybe, Liam Neeson isn’t as good an actor after all.

In the end, all that we have become is an over-sensitive, judgmental and intolerant people. That may not be politically correct. But it sure is factually true.