DailyOh! What Modi said about Hindu votes in Bengal, to how EVMs landed in TMC leader’s house

Karma is invoked when someone sees someone get away with wrongdoings. We believe karma to be the sniffer dog that will sniff out the wrongdoing and wrongdoer because there has to be divine justice even if there is no other justice. Karma is our comforter, so we believe it exists — quite like God.

Rahul Gandhi believes: “Karma is the ledger of one’s actions. Nobody escapes it.” Just so that people do not confuse the statements as the thought of the day, the Congress leader put a hashtag to the tweet — #Rafale. In case you missed it, a French media report has claimed 1.1 million Euros (Rs 8,61,20,000) was paid to a ‘middleman’ by Dassault, manufacturer of Rafale jets. 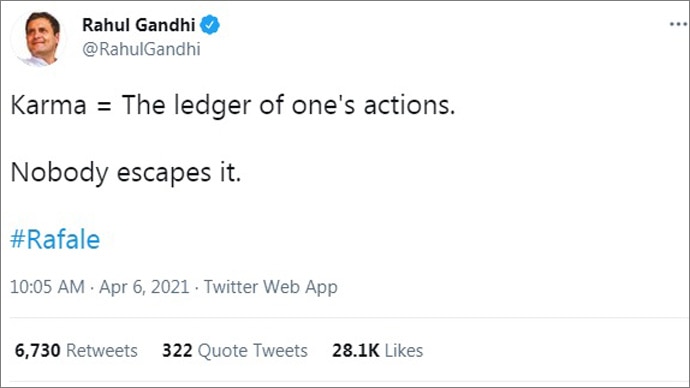 So Congress leaders and supporters have declared chowkidar hi chor hai. But PM Narendra Modi dropped chowkidar from his social media handles after winning a second term and asked his supporters to drop it too after running a campaign — Main Bhi Chowkidar — for the 2019 Lok Sabha elections. In this chor-police game, the chowkidar has gone missing. Modi has not spoken a word about the ‘middleman’ charges. Rahul Gandhi, meanwhile, is at it and he believes karma too is at it.

Mamata Banerjee, meanwhile, has objected to Modi speaking. Not in toto, but only to parts in which he taunts her and ‘lies’.

People in Bengal, Tamil Nadu, Kerala, Assam and Puducherry, meanwhile, are voting today. But we want to take you to last night when preparations for voting were underway. A polling officer took four EVMs and four VVPATs to a relative's house and spent the night there. If that wasn’t enough, the relative happened to be a TMC leader. The incident came to light, even though it was the dead of the night because villagers spotted a vehicle with an Election Commission sticker outside the house of the TMC leader. The officer, on his part, said he went to the polling booth to keep the EVMs. But it so happened that the booth had closed by the time he reached. So he went to his relative’s house. The officer stands suspended for now but the controversy over EVMs continues. Similar controversies over EVMs have been heard of from other countries as well. Not like the EVMs landing with contestants, but controversies over whether EVMs can be tampered with.

In Germany, it was a father-son duo, which took on the EVMs and got them out of the electoral process.

Germany first introduced electronic voting in European elections in 1999. But it was only in 2005 that EVMs came to be used in a big way. About 20,00,000 people voted through electronic ballots. That’s when political scientist Joachim Wiesner and his son Ulrich Wiesner, who was a physicist, complained that the push-button voting was not transparent. Joachim and Ulrich contended that the system was not transparent because voters could not see what actually happened to their vote inside the computer. The duo said this would require placing "blind faith" in technology. In 2009, a German court banned EVMs saying the system was “opaque”. But we ain’t Germans and under no compulsion to follow them on matters of faith.

We are Indians and in India, the world’s largest party — the BJP — is having a pawri today. Why? Because today is the BJP’s 41st Foundation Day. On April 6, 1980, the BJP came into existence with Atal Bihari Vajpayee as its president.

PM Narendra Modi addressed his party workers today saying while other parties and their leaders are praised for winning elections, the BJP is dubbed as an election machine. What Modi meant was that the party wasn’t given credit for winning people’s trust through its work. Should credit matter, if trust has been won? Well, it can come in handy to win more trust. And then trust translates into more seats. The BJP, we know, started its journey with two seats in the 1984 elections and reached 303 in 2019. So the foundation, you see, grew stronger with time.

The word foundation, our Word Of The Day, comes from the Latin word fundatio, which meant ‘to lay a base for’. The Oxford dictionary defines the word as ‘a principle, an idea or a fact that something is based on and that it grows from’. If your foundation is weak, the structure you build on it would collapse or be shaky. If you apply the foundation wrong, your makeup could go all wrong. So watch out. We ain’t discussing makeup because we are talking BJP. Modi is only the second leader from the party to become PM. The first, of course, was Vajpayee. And then there was the PM-in-waiting, LK Advani, whose wait ended after he was sent to the Margdarshak Mandal, a mandal whose marg no one follows. If you want to read about Advani’s journey, read his memoir My Country My Life. The thickness of the book, running into nearly a thousand pages, could be daunting but it is a fairly decent read and comes as close to telling some truths as political accounts can come.

To ensure you don’t come close to coronavirus, the Delhi government has imposed a night curfew from 10 pm to 5 am. Before and after that, the mask is your own saviour. The curfew will remain in place till April 30. In Mumbai, Zomato and Swiggy won’t deliver food after 8 pm because the night curfew is already in place.

The answer to how night curfews help curb the spread won’t be available even after April 30, since no research on the subject is being undertaken. More research on Covishield has, however, shown that it is 90 per cent effective if the time difference between two doses is two to three months. The government has asked all government workers above the age of 45 to get vaccinated.

The first dose on its own may not be effective enough, but the first dose will ensure you don’t get too sick if the virus gets to you. PM Modi today asked his doctors to get to an elderly lady who was apparently dehydrated during the Cooch Behar rally of the PM. Modi halted his speech to ensure help for the woman and then resumed the public address because what’s begun must come to an end.

#WATCH | PM Modi asks his team of doctors to assist a woman who faced some issues due to dehydration at an election rally in Cooch Behar, West Bengal. pic.twitter.com/6wC14HKfof

But before the speech came to an end Modi asked what if BJP asked Hindus to do what Mamata Banerjee asked Muslims to do. Mamata, not too long ago, had said during a rally that all Muslims must come together. Modi said if BJP had said all Hindus should come together, it would have been served notices by the Election Commission. The subtle art of saying what you want to say without saying.

Also read: The story of the mad girl from the village who listened to no one

#EVMs, #Mamata Banerjee, #Narendra Modi, #BJP
The views and opinions expressed in this article are those of the authors and do not necessarily reflect the official policy or position of DailyO.in or the India Today Group. The writers are solely responsible for any claims arising out of the contents of this article.