Let’s break this down like the human body breaks down carbohydrates, fats and proteins.

Sausages, chips, pretzels, burgers, buttered toast, doughnuts, buns, salami, croissants, eggs sunny side up, pastries, French fries, butter, chocolate éclairs (debatable), Coca Cola (without any branding, of course), beer, boiled eggs, pizzas and cupcakes will make you fat and unhealthy. On the other side of the spectrum — that is the “thin healthy side of humanity” — the food that should be consumed includes wheat, apples, difficult-to-spell leafy things, difficult-to-spell berries, assorted nuts, grapes, blackberries (not the outdated phones, no), chillies, pumpkins, kiwis (not the birds or the New Zealand cricket team), avocados, peas, and cucumbers.

No, the above statements are not facts. Not even close. They merely describe an image shared by the official Twitter account of the ministry of health and family welfare. The image that has now been deleted shows two human figures, one conventionally thin and the other with a rather curvy frame. It comes with the unsettling question: “What is your choice?”

Let’s break this down like the human body breaks down carbohydrates, fats and proteins.

For starters, the image was one that was definitely not designed by anyone from the health ministry. As Alt News founder Pratik Sinha pointed out, it was a stock image from the website 123rf.com. But why would a ministry — the health ministry no less — dole out misinformation worthy of a WhatsApp forward laced with judgment for curvier body types? The motives are a bit uncertain, but one can guess. 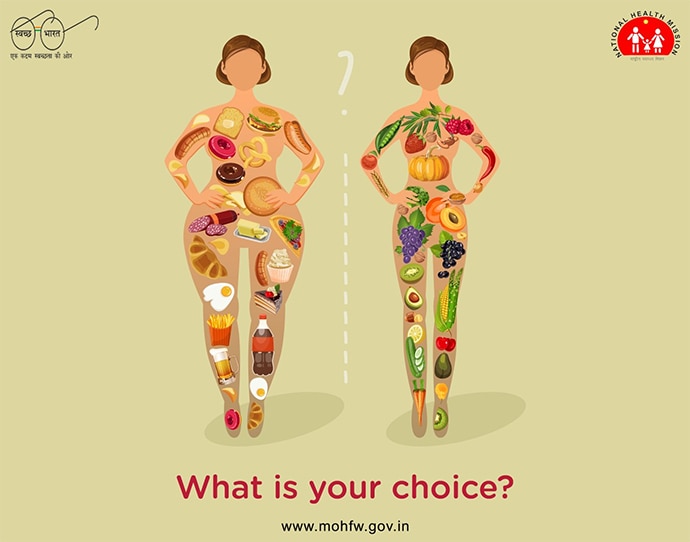 One, and this is the obvious one, is the Bharatiya Janata Party’s (BJP’s) vegetarianism agenda. Vegetarianism is predominantly an upper caste Hindu practice and has often and for long been used as a tool of oppression and ostracism in India. Anthropologist Balmurli Natrajan, writing on the food habits of India, notes: "What is claimed as a group or national ‘tradition’ is not innocent of power and struggles over hegemony."

Sociologist Suryakant Waghmore's response is a tad blunt. He says: “Broadly, present-day vegetarianism in India constitutes a form of moral power of minority within Hindus, with such a power being forced on the non-vegetarian majority – with their consent.”

Contrary to popular beliefs and myths, Indians are not even predominantly vegetarian.

According to a 2014 survey conducted by the office of registrar general and census commissioner, 71 per cent of Indians over the age of 15 are non-vegetarian — a term that, as pointed out by a DailyO columnist, seems to hit an India-only audience with “deliberate negation”. 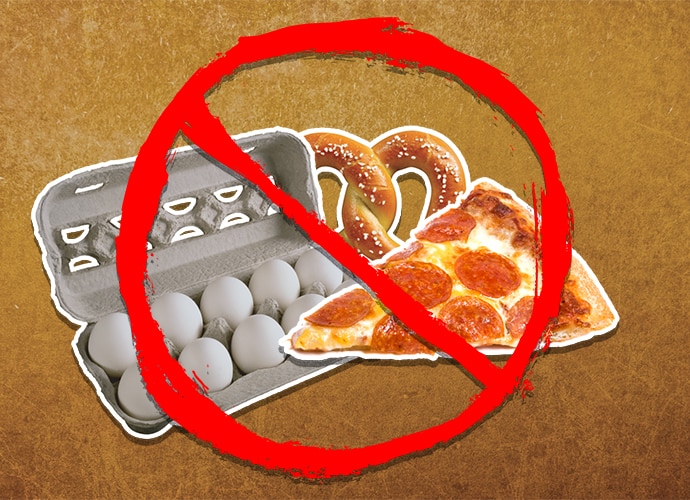 But barring the obvious vegetarian leanings of a ministry in the hands of the BJP, is there any substance to what the image would suggest? Is vegetarianism the ultimate path to health and are all the food items listed inside the curvy body supposedly bad for your health as the picture would have you believe?

Well, yes and no. Nutritionist Kavita Devgan, who wholeheartedly endorses more and more greens in our diets, also warns us that some vegetarian diets can be equally harmful. According to her, it may be difficult to find healthy vegetarian sources of iron as most of the good sources tend to be non-vegetarian. She explains that iron from plant sources is not absorbed as well as iron from meats. Hence, one needs to consciously consume a lot of good sources to make sure one gets enough vitamin C to help boost the absorption of iron from food.

But what is more problematic is the depiction of what constitutes as "unhealthy" when it comes to "looks". Long-standing ideals of beauty have led not just Indians but also others across the world to believe that only the lean (even too thin is looked down upon, especially women) with a chiselled body are good-looking and healthy. Contrary to this widely-accepted lie, however, the large and the curvy are neither always unhealthy nor ugly (for beauty is in the eye of the beholder).

But these false ideals, perpetuated through popular culture, fashion and societal norms tend to not just ostracise those who fall outside the category but also have an effect on their health, especially their mental well-being.

The image also ignores the fact that the larger body type is not always the result of bad eating habits. It can very well be the result of pre-existing medical conditions.

So why is the ministry of health spreading misinformation about food habits and adding to the health woes of the masses? One can only guess. Maybe the ministry needs to do a better job of educating itself while enjoying a nice pint of icy beer, a side of fries and a plate covered in some good, old-fashioned omelettes.

Preferably, sunny side up.

Also read: Why it's time the Queen of England returns all that she has stolen