Cutting into the life and death of Amitabh Kulashreshtra, a theatre activist

Presenting an exclusive excerpt from Sreemoyee Piu Kundu's book Cut: The Life and Death of a Theatre Activist (Bloomsbury India). Told in disparate voices, Cut presents a posthumous look at the personal and professional life of a visionary artist, Amitabh Kulashreshtra — who is intense, brooding, complex, passionate, troubled, stubborn, patriot, patriarch, pariah — and the price he paid to get his voice heard.

Cut has been chosen this year as the final year performance text at the National School of Drama that will adapt the novel into a theatrical stage version to be performed as a series of shows, starting January 24. It is to be directed by Abhilash Pillai. Book cover of Cut: The Life and Death of a Theatre Activist (Photo: Bloomsbury India)

(Excerpted with the permission of Bloomsbury India)

My body is inert; but my mind is everywhere, at once, scrabbling at memories, at the moments that defined my life.

That made and then unmade me…

"Put your hand on the Bhagwad Gita and swear you will speak the truth, the whole truth, and nothing but the truth…"

The Sessions Court where my case was being tried was packed to the brim. At the back of the cramped hall stood a long line of press photographers and television camera crews; their flashlights pointing directly at my eyes, the intensity of the flickering red spots no different from the automatic rifles that the Rashtriya Dal goons had aimed at my troupe, in Malegaon. Prakash Lele, my leading man had stood between me and the mob, as Amol Rawat labelled me a Congress puppet. I think he used the word ‘najais’. Prakash, who lost his life, defending me…

It was just after the Mumbai riots in 1992. Amol Rawat’s words rang in my ears: "Didn’t I tell you to stop brainwashing these illiterate villagers? This play of yours is a bloody catalyst… politically motivated… what are you trying to tell them, huh? Teach this ignorant lot? That Muslims deserve equality…? That Hindus started the riots in Mumbai…? That we have blood on our hands? That the Koran is no different than the Gita? Ēka vēśyā mulagā (son of a whore) have you even read the Gita to know the difference?"

"Why the Gita?" I had asked in court, my forehead smarting from the stitches. Why the Gita? Why not the Koran or the Guru Granth Sahib or the Holy Bible? (Picture used for representational purposes only) (Source: Court movie still/YouTube screengrab)

"Why the Gita? Why should I swear on the Gita that whatever I am saying, is the absolute truth?" I took a deep breath, adding slowly: "Why not the Koran or the Guru Granth Sahib or the Holy Bible — why in a so-called secular country, must there exist this blatant form of subversive, identity politics?"

If I killed a man and touched the Gita and said I didn’t — would that absolve me of my sins?"

The judge banged the table with his wooden hammer.

I grabbed the rails with my unbandaged hand and continued:

"I am a director of plays, your honour, a writer and a performing artist. I have no religion except my conscience. My 'atma' is infinite. It belongs everywhere. I did nothing wrong in staging the play — I am as much the son of a Muslim trapeze artist, as I am of a staunch Maharashtrian woman, as I am of a cheap whore. All three were the same woman from whose womb I was birthed. I grew up in a travelling circus, slept beside the animals and shat in the same place where they defecated. The water I bathed in was the same that was used to quench their thirst on sultry, summer nights. The stage where my father, a blind clown, performed his legendary acts, was the same where young, underweight children hung precariously from coir ropes, and well-fed lions were tamed by starving men lashing thick whips, where everyone followed a mundane drill, where colourful clowns danced to the same songs every evening and where stuntmen in fake leather jackets astride noisy motorcycles balanced themselves precariously on one leg." The poor have no religion. Except to clothe their bare backs and feed their naked children. (Picture used for representational purposes only) (Source: Reuters)

"What if that circus is my country, my lord? What if my country is my conscience? What if the poor have no religion? Except to survive?"

"To clothe their bare backs and feed their naked children? To just live out another day? What if our nationality, our religion, our gender, are all man-made concepts? A convenient construct to make people conform? Follow someone you can’t see or fight? What if religion wasn’t a loaded gun? A veiled threat? An election ticket?"

"What if you all killed him — killed my comrade, Prakash Lele? If everyone present here must shoulder the blame for his bloodied death? What if we all failed her? The Muslim girl who loved the Hindu boy, who wanted nothing more than an ounce of personal freedom and the dignity of choice? Whose prayer was penance…"

Amol Rawat’s lawyer cut in harshly: "Please, this is not a street play, here. You will be asked certain specific questions on the basis of the police case filed by the State in the light of the alleged murder of Prakash Lele, who was trying to save you, by the way."

"Prakash saved my life and lost his own, yes, but we were trying to save something bigger, much bigger; we were not fighting a pitched battle, but a dangerous war. A war that is more than this… all this… that will not end with his unfortunate death…"

"You have levied a murder charge against Amol Rawat, but the court holds you guilty of inciting communal violence yourself."

"Sedition…do you even understand the meaning of that word, the severity of it… huh?"

"There is a sedition charge against you, Mr Kulasheshtra. Conduct or speech —inciting people to rebel against the authority of a state or monarch… Why stage a political play in this hypersensitive environment…?’

"I am aware of the sedition law… incorporated into the Indian Penal Code in 1870 as fears of a possible uprising made the colonial authorities uneasy. Section 124-A…that is now being misused to browbeat anyone who protests, or put forward an alternate discourse, or speak in a separate vocabulary – into mute compliance…a sign of a cowardly, spineless and oppressive state willing to use any methods to intimidate dissenters. How long can you do this? Criminalise dissent? Tribals resisting displacement… villagers who resist a nuclear project…student leaders in premier institutes… Muslims cheering for a rival nation in a cricket match…cartoonists…satirists…academicians…historians… anyone who advocates on behalf of the marginalized and displaced communities…how many more voices will you silence? For how long will you hide behind an archaic law that has lost its relevance, and in doing so, surrender the democratic legitimacy of our nation…forge a new and sinister ideological blueprint?" 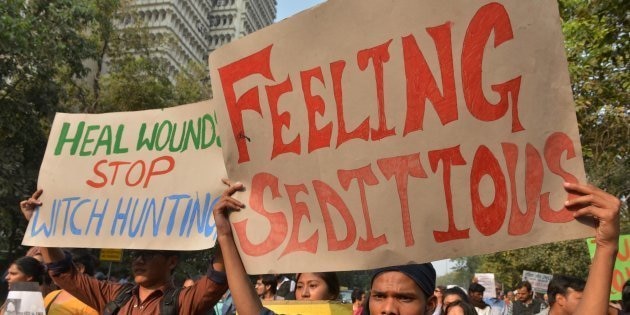 What if sedition means taking a stand? (Picture used for representational purposes only) (Source: Reuters)

Rawat’s lawyer jumped up: "I fail to understand what your politics is, Mr Kulasheshtra. Fighting for the starving farmers? Defending defunct trade unions? Flying off to Paris to sleep with some famous French starlet, not to forget your romantic fiasco in Mumbai…? My lord, this is a man of loose, wavering morals, who courts controversy to gain footage in the media … he is in no way the saint he portrays himself to be," the counsel for the defence thundered.

"What if sedition means taking a stand, my lord? What if there is another formula of freedom? What if there are no flags, my lord? Or kingdoms left to conquer…or swarthy, skin-and-bone slaves to take captive? onquer? Colonize? Castigate? Castrate? What if we don’t go to war, outside? If the war now flows in my veins, my lord? What if the revolution that we all fear so much, will be fought by artists? By ordinary commoners. By rank outsiders. The have-nots. By an ugly, poor, fellow, who stays hungry all night? Who writes stirring poems in the last light of the setting sun? And performs somersaults casting oblong shadows on the street pavement? The man who carries no weapons. Wears no uniform. Who doesn’t need a passport? The man who has nowhere to go. The man who goes nowhere. The 'kalakaar'. The 'kavi'. The 'kissan'. What if he is here, in this Sessions Court, today? Looking into the eyes of a fascist dictator?"

"Order, order…" the judge hollered as the cameras clicked furiously.

"My lord, this man pretending to be a socialist, a mass leader, is actually a 'desh-drohi'… a petty rabble-rouser, a rowdy streetfighter…he loves playing to the gallery, as you can well see," the man defending Rawat accused in a high-pitched voice:

"Tell us who you are, Amitabh Kulasheshtra? Patriot or pariah?"