Can spiritual love save ageing playboys like Imran Khan and Brad Pitt?

It’s a brave new world. George Clooney is a doting husband and a loving dad. Jack Nicholson is looking for that one true love at 82. Our very own Khiladi Akshay Kumar has become Pad Man. And news is trickling in that Brad Pitt has fallen for Sat Hari Khalsa, a much younger spiritual guru and jewellery designer, educated in India. Meanwhile, our neighbours are debating whether their very spiritual first lady can be seen in a mirror.

Ageing playboys have traditionally run after younger women to keep feeling young and wanted. Now they get married and talk about true love. Maybe it is the MeToo movement or maybe the world has truly changed. In between running barefoot from Mumbai to Pune, Milind Soman has shed the serpent he shared with Madhu Sapre once and embraced conjugal bliss with a much younger Ankita Konwar. Emraan Hashmi has stopped kissing on screen and started talking about the craft of acting and the joys of family.

Which is all very good, but Imran Khan and now Brad Pitt have given this a spiritual twist. They have loved those who love religion. According to rumours, Brad Pitt and Sat Hari Khalsa started dating about a year ago. (Photo: Twitter/Reuters)

For our deeply religious (many would argue rather fundamentalist) neighbour, a notorious playboy’s blasphemous meanderings with many an infidel woman gets instantly sanitised once he marries a peerni, who sees things and predicts the birth of a new Pakistan under Imran. 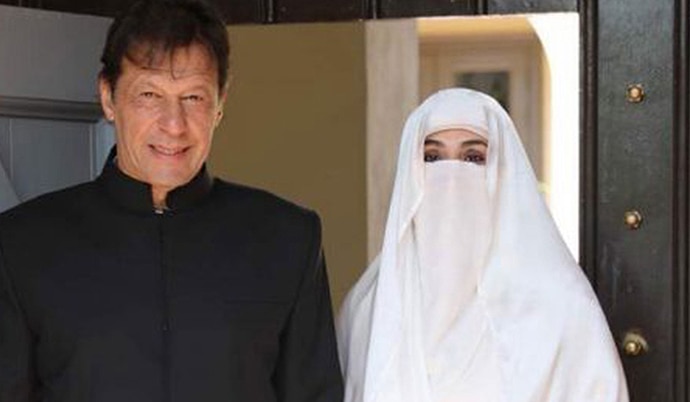 In the repackaging of a successful cricketer and national hero with a long list of women he dated and dumped and fathered a love child in the process into a statesman for the Muslim world, a younger wife is perceived as a necessary condition. Not a sufficient one. A younger wife who is a peerni is a sufficient condition. The man is both grounded and religiously grounded.

But why Brad Pitt?

Why would one of Hollywood’s always eligible men, single or taken notwithstanding, walk the same path as Khan? His audience is different. He shouldn’t have to wash away his sins by embracing a “guru” to gain acceptance.

News reports say ever since the divorce with Angelina Jolie, there have been speculation about Brad Pitt’s love life. A Us Weekly exclusive said, “Brad started seeing Sat Hari about a year ago, and since then the two have been quietly going strong… Whether the two are dating, or are just friends, all such random reports have kept the mush buzz alive, as have liberally-circulated snapshots that have magically surfaced all over the Internet, showing Brad and Sat Hari together at last September's Conservatory of Music Annual Benefit and Art Auction.”

Brad’s world may not be the same as Imran’s, but the need for resurrection remains. Post MeToo, the rules have changed and a philanderer is no more a charmer even when he is Brad Pitt. A spiritual turn through his latest love interest may just be the repackaging Brad needs. Here’s hoping he doesn’t start mouthing Kesari dialogues anytime soon.