I wonder if the Archbishop has had the “thou shall not steal” conversation with Her Majesty.

In fact, I wonder if his predecessors had one with those that adorned the throne before her. I’m guessing, at some point in the past 500 years, someone might have questioned the gory conquests and colonisation, and if they are compatible with the Ten Commandments. Perhaps, even disrespectful of them.

The issue of colonial-era loot and Britain’s moral obligation to return heritage to communities they were taken from, is not new. Greece has been asking for the Elgin marbles since 1925. Over 350 Ethiopian manuscripts, forcefully taken after the Battle of Maqdala, are still a matter of dispute.

George Clooney and his wife Amal have campaigned for the Parthenon sculptures to be returned. Nigeria has been demanding that the Benin Plaques be returned since 1960.

Ironically, Michael Walker, a private citizen that came to possess some of these plaques, has shown higher moral bearing than the British Government by returning them to Nigeria.

Indian parliamentarian Shashi Tharoor famously made the case for reparations at Oxford. The fact that almost five million people have watched the video online suggests that there’s an undercurrent of resentment.

Why shouldn’t there be?

Nations have institutionalised ways to deal with the excesses of their past, of ensuring moral imperatives aren’t ignored. Germany had the Nuremberg trials and the public acceptance of guilt. South Africa had the Truth and Reconciliation Commission. Israel has the Jewish Holocaust Center.

What does Britain have?

When it comes to acknowledging its own colonial past, and finding ways to move ahead though, Britain sadly remains in denial.

The “past is in the past” narrative might seem very tempting to the Brits, but it just doesn’t cut ice any more. Sure, you are not responsible for the actions of your ancestors. Sure, you can’t undo colonial-era oppression. Sure, you can’t reverse the effects of cultural-cleansing, where Britain wiped out the collective memories and cultures of people it oppressed. Sure, there’s no way you could bring back millions of indigenous peoples that gave their lives for freedom.

What you could do, though, is reverse the colonial-era plunder, especially symbols of our culture – our heritage. 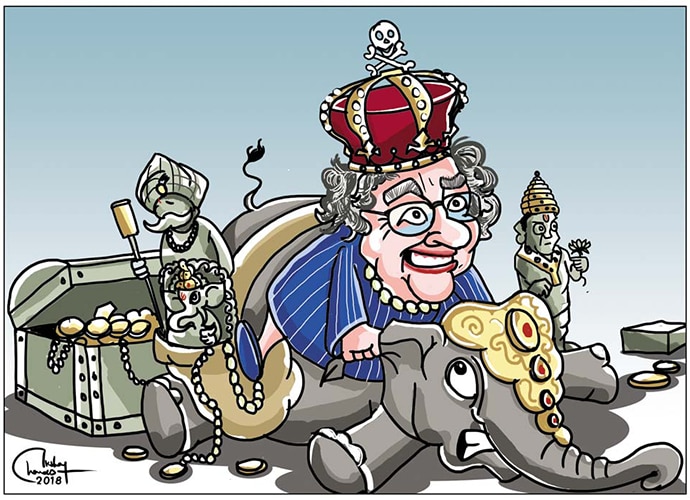 In fact, other nations are showing you the path. Five countries have returned stolen heritage to India since 2014 (USA, Canada, Germany, Singapore and Australia). Your special friend, the United States has also done this with Cambodia, Nepal, etc. So the template exists.

France? Two steps behind France? Is that really where you want to be, Britain?

Blood Buddhas and terror-funding: The fad you started

United Nations Security Council Resolution 2199 finally acknowledged what heritage restitution advocates like me always knew – that ISIS was stealing heritage/antiquities and selling them away to fund their terror operations.

The FBI issued an advisory immediately to deal with this emerging national-security threat. Nations like USA, Pakistan and China have brought in new legislation to safeguard their heritage. Others like Mexico and Jordan have recently set up heritage-protection agencies.

A few centuries ago Brits usurped others’ resources and heritage, and funded wars and colonisation efforts through that.

The precedent set by Britain is being replicated by the ISIS, which now peddles stolen heritage to fund terror attacks, including, on Londoners.

The world of culture and heritage is changing.

Israel’s Prime Minister Benjamin Netanyahu recently said, “UNESCO has become a theatre of absurd. Instead of preserving history, it distorts it.” Yup, precisely the sentiment we’ve had about museums in the UK. It sure is absurd when you show off what your grandfather stole from mine.

British museums wax eloquent on concepts like “cosmopolitanism”, “universal cultures”; even vainly suggest they could help with “capacity building” with communities whose heritage has been taken. While the platitudes and the “white”-washing make for great headlines, the most basic issues are never discussed – Consent and Restitution. No one seems to address the fact that our heritage was taken away without our consent and that it needs to be restituted. Period!

Since its founding in 1753, the British Museum is essentially a den for stashing away colonial loot. I have seen Indians cry in Room 33, where they find their Temple Deities locked away in glass cages. A couple of floors above in Room 66, you continue to showcase Egyptian and Ethiopian artifacts that were acquired under situations of very questionable morality.

As a double insult, the museum sells us replicas of the very heritage that was taken from us.

Britons chose to assert their identity by voting out of the European Union. Brexit was the assertion of identity, of civilization continuity, of sovereignty, and it is not an isolated phenomenon.

With recent debates around Donald Trump, Russia and the American elections, around the Congressional questioning of Mark Zuckerberg and Facebook’s ability to impact geo-politics, or the narrative around Brexit itself, the message is very clear – people don’t want another nation meddling in their affairs.

The movie Black Panther was a runaway hit because it struck a chord with the disenfranchised and the oppressed. As much as you might hate Killmonger, your sympathies were still with him in the museum scene, where he reclaims his civilisational identity, by asking the museum curator a simple question, “How do you think your ancestors got these?” before he forcefully reclaims the war hammer taken from Wakanda.

With recent global events reinforcing the idea of sovereignty, independence and pride in civilizational identity, I wonder if Britain might ever feel compelled to embrace the new normal?

Let’s look at this from a very selfish point-of-view as well. Britain faces an aging population. Your factories’ productivity is at its worst point in history. Inflation is growing at a much higher rate than wages are since 2013. Britain’s national debt is over 80 per cent of GDP (common in third-world countries, but unheard of in your part of the world).

You’ve cut down defence spending to a quarter of its 1950 levels (relative to GDP terms). Your teachers get paid almost as much as their counterparts in Spain (and teachers in Luxembourg twice that). Issues of race, immigration and refugees are polarizing your society.

In short, everything that that made you “Britain”, healthcare, education, jobs, prosperity, defence, social-cohesion, is currently in a state of flux. Heck, if TRP numbers are to be believed, even football is losing its sheen.

Is this really the best time to take on a “Coalition of the Colonised”?

Perhaps it’s time the monarchy got with the times.

Thou shall not covet

The British empire is long gone. But cultural imperialism continues and will continue as long as Britain holds on to remnants of an era that is never coming back. Not just emotional remnants, but physical ones.

It’s high time Britain came to terms with the simple reality – history belongs to its geography.

The world is shrinking and we’re virtually neighbours now. Perhaps it’s time to remind yourselves of “thou shall not covet”, and more importantly, make up for the time you did.