Is Black Death back? What you need to know about bubonic plague

After Covid-19, it is now the fresh outbreak of bubonic plague in China that has the world worrying.

The year 2020 is marked with diseases. As if Covid-19 was not already enough to drive paranoia up, eating up nearly half a year, Bayannur — a city in northern China — was put on high alert after a suspected case of bubonic plague was reported on Saturday. Last week, on July 1, the state-run Xinhua news agency reported that two suspected cases of the plague that were recorded in Khovd province in Western Mongolia were confirmed by labs. They were two brothers who reportedly ate the meat of an infected marmot. Nearly 150 people who had been in contact with the two cases have been isolated to control the spread. Naturally, the first question is:

What is bubonic plague?

Bubonic plague is a bacterial infection caused by the bacterium Yersinia pestis. The bacteria also cause two other types of plague — Septicaemic plague and Pneumonic plague. A member of the plague prevention team in China holds rodents on grassland in Sichuan province in 2019. (Photo: Reuters)

It is a zoonotic disease that is spread by infected fleas from rodents or from exposure to a dead plague-infected animal. A team from the universities of Oslo and Ferrara published a study in 2018 in the Proceedings of the National Academy of Science (PNAS) that said that the disease could be spread by rats, transmission fleas and lice that live on humans and their clothes, and also could be airborne through the nasal aerosols of humans. The last part sounds eerily similar to Covid transmission.

Once the bacteria enter the human body through a flea bite, it travels through the lymphatic vessels to the lymph node, causing them to swell. The primary symptom of the disease is the swollen lymph nodes, which can get as large as chicken eggs. These are called buboes — derived from the Greek word βουβών (Būbōn), that means swelling in the groin. This is also the root for the name ‘bubonic’. The other symptoms of the disease include fever, chills, coughs, fatigue, open sores and muscle ache. The disease is diagnosed by taking the blood, sputum or fluid sample from the buboes and examining it for the presence of Yersinia pestis. 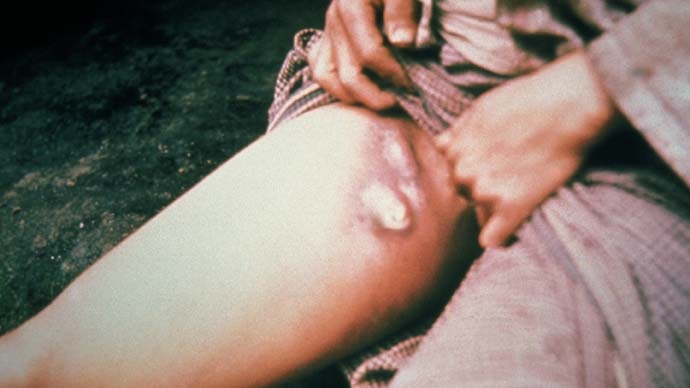 Buboes on the upper thigh of a person infected with bubonic plague. (Photo: Wikimedia Commons)

If it is not treated in time, the bacteria can kill an adult in less than 24 hours.

It is estimated to have a basic reproduction number or R-naught between five and seven. You would know what this means if you watched Steven Soderbergh’s thriller Contagion. For those who haven’t watched the movie, R-naught means that one infected person can spread the disease to five to seven people. To put this number in perspective, Covid-19’s R-naught number is between one and two, and common cold’s basic reproduction number is between two and three. So bubonic plague is twice as contagious as the common cold and nearly four times as contagious as Covid-19.

The plague was the cause of the Black Death that swept through Asia, Europe, and Africa in the 14th century and killed an estimated 50 million people. It killed about 25 million people — more than a third of Europe's population — between 1347 and 1351, and about one-fifth of London's population during the Great Plague of 1665. It claimed more than 12 million lives in China and India during the 19th-century outbreak. Yersinia pestis under a microscope. (Photo: Centers for Disease Control and Prevention)

It was considered an active pandemic until 1959 by the World Health Organization (WHO). After 1959, the number of cases dropped to 200 or less globally. However, in 1994, there was an outbreak in five Indian states that caused an estimated 700 infections that caused 52 deaths. Madagascar saw more than 300 cases during an outbreak in 2017. However, a study published in The Lancet found that less than 30 people had died in that outbreak. As recently as in May last year, a couple died of bubonic plague in Mongolia after eating the raw meat of a possibly infected marmot as part of a purported cure in traditional Chinese medicine.

While it was once the world’s most feared disease, the advances in medicine have made it easily treatable now with antibiotics.

This time around as well, health experts are not too worried. WHO spokeswoman Margaret Harris said on Tuesday that the present outbreak in China is being "well managed" and is not considered to represent a high risk. In an interview with Healthline last year, Dr Shanti Kappagoda, an infectious diseases doctor at Stanford Health Care, said, “Unlike in the 14th Century, we now have an understanding of how this disease is transmitted. We know how to prevent it."

However, thanks to the coronavirus, the entire world is edgy when it comes to an outbreak. Ironically and very unfortunately, since the present bubonic plague outbreak is also in China, the world is far less charitable and a lot more tetchy.

While there is nothing (yet) to worry about when it comes to bubonic plague, it would do all of a lot more good to maintain precautions of not inhaling possibly-infected aerosols (in short, wear the mask!), clearing our cupboards of fleas and also possible rodent infestations. If you are one of those who experiment with different kinds of meats, we suggest you stay off rodent meat for the time being.

Also Read: The truth about the bioweapon hazard story

Post your comment
#Covid-19, #China, #Rodent infestation, #Bubonicplague
The views and opinions expressed in this article are those of the authors and do not necessarily reflect the official policy or position of DailyO.in or the India Today Group. The writers are solely responsible for any claims arising out of the contents of this article.