Buying a bike on OLX? Don't let thieves like the Ghaziabad two take you on a ride

olx bike thief gang Ghaziabad: The Ghaziabad Police has arrested two individuals accused of stealing bikes and selling them on OLX. But how did the gang convince the buyers on OLX?

Next time when you buy a bike on OLX, the first thing you should do is:

1. ask the seller not for the bike, but for its orginal documents; a hard copy

2. In case you don’t receive them, dump the purchase.

The bike which you landed up on after searching for hours (or days, or weeks) might be one stolen from some place, and later put up for sale, and you might end up being conned for a bike which has a fake number plate. Bikes stolen and then sold on OLX. Illustration: Seemon, DailyO

The Kaushambi Police of the Sahibabad district of Ghaziabad has busted such a bike theft racket of more than two people who would steal bikes, and later sell them on the online selling app OLX. The police have recovered 21 two-wheelers from the accused after raiding several locations in Ghaziabad and Mussoorie.

The third accused, who is an RTO agent, is on the run.

So, what happened? What is the case all about? Here are 4 points to sum it up for you:

That something is wrong, came to the notice of a person who had gone for the fourth servicing of his scooty. He was told by the agency that the fourth service was done and that the fifth awaited. When the customer objected to it, the details of the bike were fished out online, and it was found out that a bike with a similar number plate was out on the streets. The customer then reported the matter to the police. 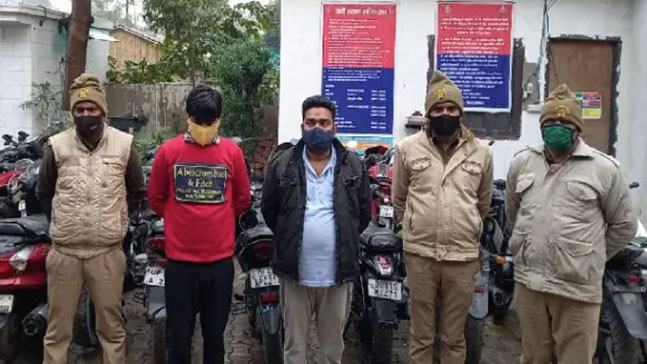 On Sunday morning, January 9, during a routine check-up of vehicles in Ghaziabad, two youths were apprehended with a stolen scooty. On being questioned, they revealed that they purchased stolen bikes from someone called Anas of Sotiganj district in Meerut, Uttar Pradesh.

According to inspector Sachin Malik, the two on further investigation revealed that Anas used to tamper the chassis number and engine number of the stolen vehicles, news agency Granthshala India said. After stealing the bike, Anas would get in touch with Raman Sardar, a native of Karol Bagh, New Delhi, an agent at the RTO office in Delhi.

Raman would then obtain computerised fake registration papers of the vehicles through his channels in the government office at Rs 2,000-2,500.

After getting the fake number, the two accused would make a number plate and fix it on the stolen bike. They would then advertise the bike on online selling application OLX.  The accused Shadab is a resident of Faridnagar Police Station, Bhojpur; and Mushir Malik, a resident of Kaila Bhatta, Ghaziabad. Kaushambi Police raided several places including Ghaziabad and Mussoorie, and recovered 21 two-wheelers. The police said that the chassis number and engine number of almost all the vehicles were destroyed.

The accused have revealed that they have been in this business for the past four years and have stolen nearly 100 vehicles.