Is the expansion in accordance with Modi's 'minimum government maximum governance' promise?

Amid speculations, the much talked about Cabinet reshuffle finally took place on July 5, 2016.

The ceremony to induct new ministers in the Cabinet took place at Rashtrapati Bhavan. Here are key things to know:

1. 19 ministers from ten different states have become a part of the new Modi Cabinet. There are three ministers each from UP and Gujarat and one from Uttarakhand; all three states where elections will be held next year.

3. Prakash Javadekar, who earlier held the position of minister of state (Independent charge) has now been promoted to a full Cabinet rank.

4. Five ministers have resigned to make way for new entrants. 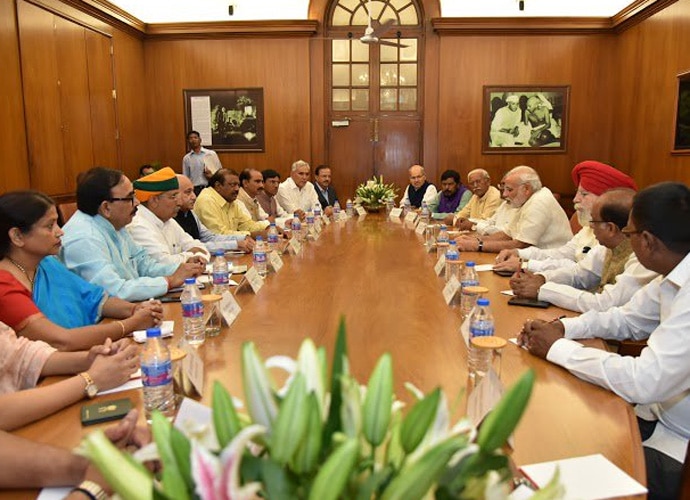 PM Modi met with the new Cabinet after the induction of ministers.

5. The council of ministers can only have 82 ministers, after the resignation of five ministers and including the 19 ministers, the total strength of the Cabinet now adds up to 78 ministers.

6. An exhaustive vetting process was followed to choose the new ministers, as Modi wanted ministers who are "doers and performers" and who can "deliver on his vision of development and priorities - gaon, garib and kisan (village, the poor and the farmer)."

7. PM Narendra Modi met the new Cabinet after the reshuffle where they will were assigned ministeries.

9. The new ministers are an interesting mix. The new Cabinet now has an advocate (PP Chaudhary), a surgeon (Subhash Bhamre), an editor (MJ Akbar), a former bureaucrat (Arjun Ram Meghwal) and a writer and conservationist (Anil Madhav Dave).

Modi's new Cabinet seems to take in consideration the caste, social and regional factors in play. While we see ministers from Uttar Pradesh, Gujarat and Uttarakhand, all three states where elections are scheduled to be held next year, there are two ministers belonging to the Scheduled Tribes, five belonging to Scheduled Caste, two minority leaders and two women.

Two years ago, the Modi Cabinet was constituted with 45 ministers, riding high on the minimum government formula. With the explansion of the Cabinet and 78 ministers now in Modi's team, the "minimum government maximum governance" policy is under scrutiny.

How Modi plans to deliver on the same will be worth the wait.