What was the CBSE Class 10 English comprehension passage on 'emancipation of wife'?

As the passage in one set of question paper in class X English Exam is not in accordance with guidelines of the board with regard to setting of question papers, it has been decided to drop the question and award full marks to the students for this passage . pic.twitter.com/IHfoUJSy2O

WHAT WAS THE PROBLEMATIC PASSAGE? The three-paragraph-long passage has led to criticism for being “regressive” and offensive to women. The third paragraph reads, "What people were slow to observe was that the emancipation of the wife destroyed the parent’s authority over the children. The mother did not exemplify the obedience upon which she still tried to insist... In bringing the man down from his pedestal, the wife and the mother deprived herself, in fact, of the means of discipline.”

Here is the comprehension that is in question and is circulating all over Twitter:

Cbse on drugs #CBSE In the era of web3, this is the mentality cbse wants to imbibe in us... It's so pathetic, it's not even funny pic.twitter.com/jlOdVMM4W1

CRITICISM: Earlier, on December 13, Congress interim President Sonia Gandhi slammed the comprehension as a 'shockingly regressive' passage during the Zero Hour in Lok Sabha. She also sought an apology from CBSE. Gandhi said, "The passage contains atrocious statements, such as ‘women gaining independence is the main reason for a wide variety of social and family problems’. The entire passage is riddled with such condemnable ideas and the questions that follow are equally nonsensical."

Seeking an apology, she added, "I urge the ministry of education and CBSE to immediately withdraw this question, issue an apology, and conduct a fair review into this lapse and ensure this is never repeated."

The Delhi Commission for Women also issued a notice to CBSE. The notice asked for the details of the person responsible for writing the comprehension passage and whether the material was scritnised by CBSE or not. Here is the notice: 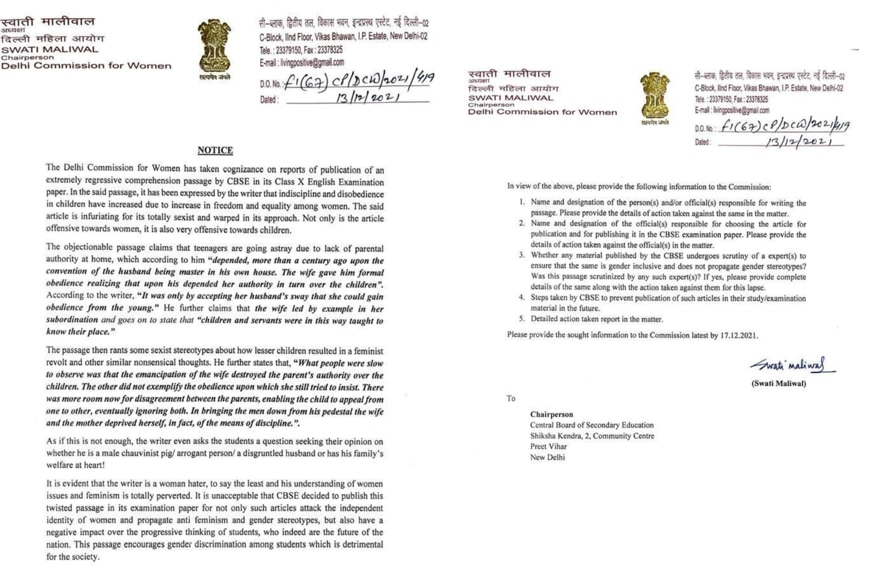 Congress's General Secrectary Priyanka Gandhi Vadra also tweeted, "Unbelievable! Are we really teaching children this drivel? Clearly the BJP Government endorses these retrograde views on women, why else would they feature in the CBSE curriculum?"

Unbelievable! Are we really teaching children this drivel?Clearly the BJP Government endorses these retrograde views on women, why else would they feature in the CBSE curriculum? @cbseindia29@narendramodi?? pic.twitter.com/5NZyPUzWxz

CBSE'S RESPONSE: After massive backlash, CBSE has also announced that an expert committee has now been set up to thoroughly review the question paper-setting process. This move is intended to avoid similar occurrences in future.