Redeveloping Chandni Chowk: Is it necessary to axe our rich past to pave way for development?

The present plan proposed to redevelop the oldest part of Delhi is aimed at ruining the aesthetic heritage of the ancient locality.

Even as the Prime Minister hoists the national flag at the main gate of the Red Fort and delivers the customary address to the nation from its ramparts, a group of citizens are fighting a battle for the area right ahead of the monument.

The 1.5 km stretch from Red Fort to Fatehpuri Mosque in Old Delhi’s Chandni Chowk has been fraught with tensions between the Aam Aadmi Party government’s plan for redevelopment and the historians striving to preserve the heritage of the place. 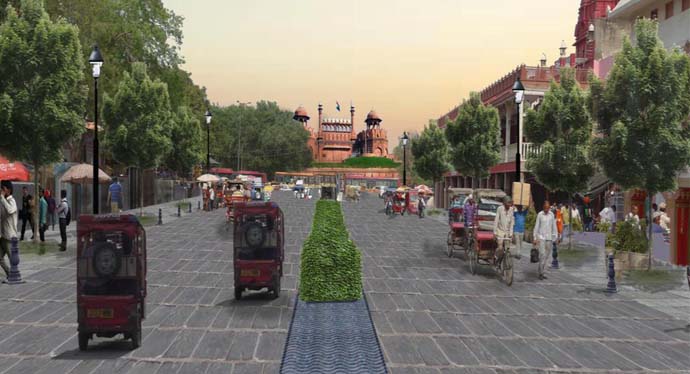 An artist's illustration of Chandni Chowk after redevelopment. However, it fails to account for the structures on the central axis. (Photo: delhi.gov.in)

Chandni Chowk — or the moonlight square — was built in the 17th century by Mughal Emperor of India Shah Jahan and designed by his daughter Jahanara. The model of Chandni Chowk is considered to be one of the most formally complex and vital public spaces of Shahjahanabad. On one side stands the Red Fort and is connected by a straight road and a clear line of vision to the Fatehpuri Masjid that was built in 1650 by Fatehpuri Begum, one of the queens of Shah Jahan. It is a ceremonial boulevard, which is punctuated by two “chowks”. It is said that the road used to be a water channel in the days of yore. The moonlight would be reflected in its clear waters and thus came the name — Chandni Chowk. The road is also the central axis of the historic city of Shahjahanabad.

The present plan of redevelopment by the Shahjahanabad Redevelopment Corporation (SRDC), under the aegis of the Delhi government, involves the construction of 23 transformers, six toilets, three urinal blocks, three police booths, two police posts and two traffic police booths to be built on the central median. The foundation stone was laid by Deputy CM Manish Sisodia on December 6, 2018. The digging of trenches along the wide central verge has embarked and tangled mess of electric and telephone wires will now be laid in these trenches. The petitioners depict how the street will function after installing the oil-type transformers on the central verge, posing a major fire hazard to life and property. (Photo: Special arrangement by Smita Datta Makhija)

It is this plan that now stands as a bone of contention.

“According to the present proposal, the central verge will create a visual barrier between the sides of the street. With transformers, police booths and toilets on the central median, the uninterrupted view along and across the avenue will be gone,” points out Smita Datta Makhija, Delhi-based conservation architect. “Even the British respected this historical and sacrosanct visual and physical axis of the promenade. During their intervention of placing the clock tower, an arched frame was provided at the ground level to keep the line of sight connected from the Red Fort to the Fatehpuri Masjid. How can we be so callous with the remnants of our rich past and heritage?”

The project is not in the good books of the Delhi Urban Art Commission (DUAC), 1973 either. The rules mandate that the necessary approval of the DUAC has to be sought and the authority can approve, reject or modify any proposal for the redevelopment of “historically sensitive areas” such as those around Jama Masjid, Red Fort and Qutub Minar. According to reports, the necessary approval was not sought before commencing the project. The British intervention of placing the clock tower also respected the central axis — an arched frame was provided at the ground level to keep the line of sight connected from the Red Fort to the Fatehpuri Masjid. (Photo: Wikimedia Commons)

Makhija is a member of the International Council on Monuments and Sites (ICOMOS). Along with another member — AG Krishna Menon, Sujata Kohli, the president of Indian Society of Landscape Architects (ISOLA) and Prof Ashok B Lall, the Design and Technology Chair at Kamla Raheja Vidyanidhi Institute for Architecture (KRVIA), Mumbai, she filed an objection to the plan in the Delhi High Court.

The Court has since directed the LG to review the redevelopment issues with all the stakeholders. The LG then asked SRDC to re-examine the scheme, and the SRDC has agreed to relocate police booths and toilets away from the central median. The issue of the relocation of transformers is still under consideration.

According to Makhija, nowhere in the world are transformers placed on the central axis of a densely populated historic settlement. Moreover, the oil type transformers that are being used here are placed on the central verge. This creates a fire hazard to life and property of the pedestrians and the rickshaw operators. "21st-century options must be made available to the residents of Chandni Chowk and only dry-type transformers, which are safe, must be used. Even these need to be placed in an appropriately designed manner both on grade and in basements as per solutions tailored specifically to each location based on studies to create a Smart Shahjahanabad," explains Makhija.

"The view presented by the designers roped in by the SDRC does not portray correctly the density of movement on the street. We used the presentation drawing by the designer as a base and revised it to illustrate the density of rickshaws and people on the street. It explains how dangerous the oil type transformers on the central verge can be, posing a major fire hazard besides creating a visual and physical divide of the avenue," she adds. The positioning of the transformers falls on the straight boulevard connecting Ref Fort and Fatehpuri Masjid. (Photo: Smita Datta Makhija)

DUAC has submitted a report to the LG supported by technical information which clearly states location and technologically feasible options to relocate the utilities.

The DUAC has always maintained that the redevelopment project needs to undergo massive changes and has stated that all the proposed utilities must be relocated on either side of the central axis. It is not sitting very well with either the government or the architect who designed the plan — Pradeep Sachdeva.

It is a tug of war that is still on.

The question that needs to be addressed beyond the legalities and modalities of the scheme is: Are we willing to compromise on our rich past under the garb of "development"?

Also read: Glorious history of Delhi's Jama Masjid — the mosque that promised a view of the world

#Delhi Government, #Fatehpuri masjid, #Red fort, #Chandni chowk
The views and opinions expressed in this article are those of the authors and do not necessarily reflect the official policy or position of DailyO.in or the India Today Group. The writers are solely responsible for any claims arising out of the contents of this article.