Merely lining up projects will not save Chennai from disaster

The rush of development plans within the broad development discourse in itself has many side effects.

After successive climatic risks engulfed Chennai — the floods in 2015, Cyclone Vardah (2016) and the drought (2016-2017) — there has been a rush of development projects in Tamil Nadu, especially in its capital city to make it sustainably liveable.

According to a Greater Chennai Corporation official, under the Smart City project, transformation of T Nagar in Chennai would begin in August. Simultaneously, the draft Tamil Nadu State Housing and Habitat Policy is set to be public later this month.

Accordingly, it is no exaggeration to point out that Chennai — the third largest city of India — is currently the laboratory of climate change, rise in sea level, solid waste management, water management, affordable housing, over and above all urban agenda for both external and domestic development partners, lead academic institutions based in Chennai and beyond India and nascent civil society organisations (CSOs).

Beyond these high-profile but least consulted and coordinated projects among the funding agencies as well as state-governing bodies, there are numerous projects in the pipeline too. 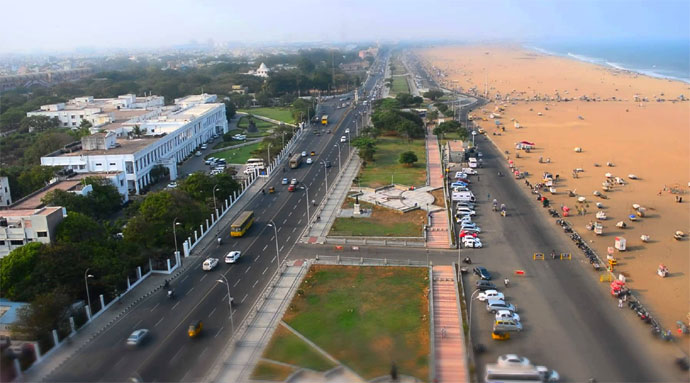 There has been a rush of development projects in Tamil Nadu, especially Chennai to make it sustainably liveable.

Consequently, the rush of development projects under such experiments within broad development discourse in itself has many side effects, strongly evident in Chennai.

From the outset, the research and development are active so long as the funds are in the locker or the external funding agencies - both multilateral and bilateral - choose accordingly to their priorities.

The project-driven zeal of all the stakeholders (mostly CSOs, academic institutions and government agencies) engaged in Chennai abruptly ends once the project comes to an end.

The findings, outcomes, recommendations or suggestions from numerous research, studies, workshops and conferences organised or implemented by elite institutions, think tanks or CSOs are limited to networking among themselves or at the most, to publish as a paper.

Worst, according to the terms of reference (ToR) for a number of projects, parallel ad-hoc institutions which are established won’t function accordingly after the termination of the project.

In 2010, preparation of the Tamil Nadu State Action Plan of Climate Change (TNSAPCC) was initiated with the support of GIZ by the department of environment.

Since July 2014, a final draft of TNSAPCC has been carried in the website with establishment of Tamil Nadu Climate Change Cell (TNCCC) at the department of environment.

Presently, there is an informal discussion to establish a cell each for Smart City, for 100 Resilient Cities, Cities Fit for Climate Change, Disaster (management) and for urban agenda, at Greater Chennai Corporation to address standalone project objectives.

In addition, a steering committee was being formed in April this year under the ADB-funded project — Strengthening Climate Change Resilience in Urban India.

Are the agencies or wings of Greater Chennai Corporation or state government competent enough to coordinate across projects objectives?

The higher officials who are trying to coordinate various objectives under similar themes have been transferred within a short span to other departments. It is a general sweeping statement that there is no coordination among state agencies which is distinctly visible in the Chennai administration. While it is partially true, the major impediment lies somewhere else.

How about coordination among CSOs, academic institutions and think tanks which are engaged in consulting to devise probable projects or recommending to address the problems? There is absolutely minimal coordination.

Secrecy to get the project from funding agencies and not to share it in public are the norms both for government and non-government institutions. These so-called knowledge brokers are engaged in consultancy without accountability.

In general, public information disclosure on development programmes and projects in Tamil Nadu/Chennai is the lowest among the rest of India. The encouragement for not sharing information is led by the state Assembly itself if one goes through the Assembly website .

Besides the "who is who" in the successive governments, the section which would be more important as the status of development plans (under the "Questions and Answers") in Assembly are completely missing. Similarly, the elite institutions which claim to be top-notch knowledge broker consultants, wouldn’t see eye to eye or share the completed research outcome with public or among themselves to generate policy advice to governments.

Having awarded a number of projects to address the gaps and challenges in Chennai City is a welcome step. But to implement those projects under democratising decision-making process needs to be adhered to by sharing information, building coordination and allowing discussion throughout the project cycle.

The habitants of Chennai must take it as a project city to ensure its resilience rather than making it a city of numerous projects.

Post your comment
#Smart city, #Development, #Chennai
The views and opinions expressed in this article are those of the authors and do not necessarily reflect the official policy or position of DailyO.in or the India Today Group. The writers are solely responsible for any claims arising out of the contents of this article.